The Japanese animated romantic-drama “Ride Your Wave” starts off as a cute love story, but quickly becomes a moving character study about accepting personal loss. We follow charming, but clumsy surfer Hinako (Rina Kawaei) as she falls in love with Minato (Ryota Katayose), the gentle, attentive firefighter who saves her life soon after she moves to a postage-stamp-sized town by the sea.

Hinako and Minato have a believably intimate summer fling: they bond over surfing (he’s not very good at it, but loves to learn from her); cooking omurice, the popular Japanese dish that pairs a fluffy omelet with rice (she’s not great at preparing them, but he is); watching fireworks together; and loving finless porpoises.

But then Minato dies while trying to save a total stranger, an act of saint-like kindness that’s only credible because he mostly exists in “Ride Your Wave” as an extension of Hinako’s emotions. Then again, while Minato’s spirit is a figment of Hinako’s imagination, he’s also real: he appears to her in any water surface, including tap and toilet water. Sometimes she imagines him as a porpoise, and sometimes, he appears as a tidal wave of ocean water, which suggests that Hinako’s emotions are as substantial as the surf under her board.

That synopsis might make “Ride Your Wave” seem like a tone-deaf and painfully earnest melodrama, but the movie’s unabashed sentimentality never feels unbearable. Director Masaaki Yuasa (“Lu Over the Wall,” “Mind Game”) and screenwriter Reiko Yoshida’s light, sensitive consideration of Hinako’s feelings is genuinely refreshing, especially Yuasa’s focus on the ambient sounds and earthy details of Hinako and Minato’s romance. I was especially impressed with the movie’s sound design, which gives a clear sense of the romantic isolation that Hinako and Minato experience because of their microscopic environment, like when seaside fireworks pop and hiss in the distance. I also love the scene where Minato’s best friend Wasabi (Kentaro Ito) struggles to regain his balance on a zipline during his firefighter training. You can hear other firemen cheering Wasabi on as he tries to pull himself up by his legs and shimmy from one post to the other. He sighs heavily after a while as his colleagues yell somewhere off-screen; his carabineer shifts with his weight. It's a brief but revealing moment.

Hinako’s world is also credible because she isn’t treated like the platonic ideal of a teenage girl. You can see Yuasa’s warts-and-all affection for his young lovers in a scene where the ocean breeze causes both Hinako’s dress and Minato’s light denim shirt to puff up as they talk; for a moment, they both look like David Byrne in his oversized “Stop Making Sense” suit. Her cheekbones and shoulder blades also stick out, and his arms and torso are impossibly lean. They’re not realistic, but they are real enough because the world they live in is believably small.

With that said: there are several scenes in “Ride Your Wave” that, in more inexpert hands, might have been unbearable given its uneven mix of humor and sappiness (seriously, why is his ghost haunting her in the toilet?). But I always wanted to suspend my disbelief because Yuasa and his collaborators pushed so hard against their better judgment as they tried to faithfully represent Hinako’s post-romantic depression. Hinako’s visions of her dead boyfriend are sometimes too whimsical, but her emotional derangement is never the punchline for cheap jokes. She summons him by singing one of their favorite pop songs, which feels right because the scene where Hinako and Minato first sing together in his car is sweet and unassuming. Also: every time she summons him, she always seems to be surprised to see him, because, well, who would expect to see their dead ex in the bathtub?

“Ride Your Wave” is as much about the way we process unexpected events as it is about living with grief. Hinako’s narrative takes a number of unexpected, leisurely paced turns that, in an unostentatious way, reflect Hinako’s intuitive attempts at finding closure. She grows closer to Minato after his death because she sees him through the eyes of Wasabi and Minato’s tetchy sister Yoko (Honoka Matsumoto). Hinako also looks for Minato by burrowing deeper into her memories of him, like when she struggles to revive his dead cellphone or when she stalks the careless teenagers who, in an early scene, start a fire that Minato helps Hinako to escape. “Ride Your Wave” moves without a great sense of urgency, but only because Hinako’s emotional turmoil isn’t a great conflict or a tragedy. It is, however, as real as the private heartaches that we self-consciously wear on our sleeves. 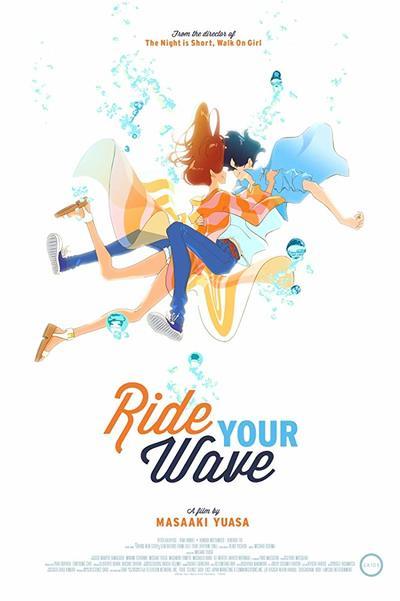