Lu Over the Wall

Please note: This is a review of the English language version of "Lu Over the Wall." At the time of this writing, I'm unsure if the film's original Japanese language version will be released in America. This review was written based on the cut that GKids Films is releasing theatrically on May 11 at a limited number of American theaters.

How can an animated movie that looks as good as the family-friendly Japanese fantasy "Lu Over the Wall" be so unimaginative? If a movie's style is in fact a reflection of its content, then "Lu Over the Wall" is just as boring as its narrative tropes, many of which rehash conservative ideas from countless fairy tales, and even recent Studio Ghibli animated films (I'm thinking especially of "Ponyo"). In this attractive-looking, but predictable and over-long parable, a pre-teen nebbish learns that he's allowed to outgrow his inherited prejudices and become his own person. If you thought that sounds promising: boy, do I have bad news. "Lu Over the Wall" is a crashing disappointment, even if you haven't seen director Masaaki Yuasa's relatively inspired and completely unpredictable 2004 anti-coming-of-age fantasy "Mind Game." Its creators listlessly retread familiar territory and never add anything that must be seen first-hand in order to be understood.

To be fair: it's hard to say what exactly is different about the English language dub of "Lu Over the Wall" compared to the original Japanese language version. I know that the dialogue was originally written by Yuasa and co-writer Reiko Yoshida, and then adapted/rewritten for American audiences by Stephanie Sheh and Amanda Céline Miller. But beyond that, I don't know who came up with what ideas. I can, however, tell you that the plot is convoluted and whimsical in ways that do nothing to enhance its under-developed, vague family-first values.

"Lu Over the Wall" follows mopey introvert Kai (Michael Sinterniklaas), an aspiring musician who finds his joie de vivre after he visits Merfolk Island despite the warnings of his crotchety grandpa and over-protective dad Teruo. While there, Kai stumbles upon manic pixie dream mermaid Lu (Christine Marie Cabanos), who provides Kai and his friends' garage band with a much-needed X-factor element. Soon, the group has a viral hit and more attention than they know what to do with.

At this point, "Lu Over the Wall" becomes a rote story about generational differences, or, more specifically, about a middle-school-aged kid who struggles to assert himself against his out-of-touch guardians. This is the kind of fairy tale that is only superficially for kids. Like the recent cycle of Pixar films, "Lu Over the Wall" is really for parents who are wringing their hands at the thought that their children aren't ready to swim on their own (looking at you, "Cars 3"). That's not an exaggeration: Kai is so paralyzed by fears that his dad and grandpa put in his head, that he needs Lu to teach him how to swim. So it's up to the magic fish-girl to teach the shy nice boy how to love himself enough that he can impress his single dad and over-protective pop-pop, making them lower their guard, and realize: hey, maybe this kid's gonna make it.

Phooey. Why does it take 112 minutes to reach this foregone conclusion? And why is there nothing to latch on to here beyond a convoluted backstory about how mer-people dislike sunlight? And why is the cautionary "King Kong"-esque sub-plot—about exploiting the things you fear/don't understand—so boring?

How could "Lu Over the Wall" be so lame, given that its animation has such an irresistible cartoon-y feel to it? All the characters move with impossibly flexible rubber limbs, but only when they dance, or are under-water. Yuasa characteristically excels at expressive dream sequences, flashbacks, and under-water tableaux. These over-the-top set pieces let him and his team combine all kinds of disparate styles, including hand-painting, and elaborate computer-enhanced montages. Say what you want, but "Lu Over the Wall" is a beautiful-looking film.

Still, I can't lie: I was bored throughout the 112 minutes I spent watching "Lu Over the Wall." I initially thought that I was allergic to the mediocre English voice actors' performances. But I soon realized that that my biggest problem was that I couldn't reconcile the basic disconnect between the thrilling story-telling and the paint-by-numbers story. I wanted the film's creators to do something with their formulaic narrative, but they never did.

Kai and his world just aren't developed well enough that I wanted to invest yet again in the well-meaning myth of the family whose love is strong enough to solve all their problems. It shouldn't need to be said but: people change because they have to grow apart from each other, not because an effervescent fish-tween solves all their problems. Maybe that particular lesson's more believable in the Japanese-language version. I doubt it, but hope springs eternal. 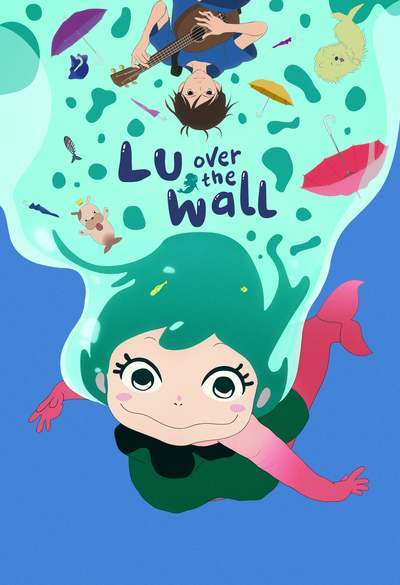