Since it first burst upon the big screen in 2002, the “Resident Evil” film franchise has been a guilty pleasure that I have felt absolutely no guilt in loving over the years. Vaguely inspired by the equally long-running video game series, the five movies to date have tried and largely succeeded to entertaining the 14-year-old boys within us all with increasingly lunatic combinations of blood, guts, ear-splitting noise, CGI creatures of all shapes and sizes, and screenplays that have become increasingly cubist in their approach to narrative and so little dialogue that they make the works of Terrence Malick seem like yakfests by comparison. And yet, as blatantly crass commercial endeavors go, these films have delivered the goods in a far more consistently satisfactory manner than most recent action franchises of note and at their peaks, they display a cheerfully hallucinatory nature that is as worthy of analysis in the pages of Film Comment and Cineaste as it would be on the various horror movie websites. Alas, all good things must come to an end and the latest installment in the franchise, “Resident Evil: The Final Chapter” arrives in theaters with the promise that it will indeed bring the whole thing to a conclusion, though there is plenty of wiggle room at the end if Paul W.S. Anderson, who has produced all of the films to date and directed the lion’s share of them, and Milla Jovovich, who has starred in them all as the impossibly glam zombie ass-kicker Alice, decide to do another one down the line.

To try to summarize the entire backstory here for those coming late to the party would be futile, if only because the series is still revealing key background details even at this late date. Suffice it to say, the insanely far-reaching and simply insane Umbrella Corporation developed a miraculous vaccine called the T-virus that had the unfortunate side effect of transforming those exposed to it into zombies, mutants and the like. After the virus was accidentally unleashed, Alice was part of a team sent into Umbrella’s headquarters in Raccoon City to clean things up and despite killing hordes of the creatures trapped inside the building, the virus eventually escaped and turned most of the world’s population into creatures for Alice and the fellow survivors she would come across on her travels to reduce into 1’s and 0’s before our eyes. At the conclusion of the last episode, Alice found herself in a bombed-out Washington D.C. joining forces with her mortal enemy, Umbrella bigwig Albert Wesker (Shawn Roberts), to stop the Umbrella AI unit known as The Red Queen from eliminating humanity once and for all.

Apparently deciding that continuity is another thing that needs to be eliminated, “The Final Chapter” then goes on to ignore that setup entirely by starting off with Alice waking up in the ruins of the White House after being betrayed once again by Wesker and being offered the chance by the Red Queen (Ever Anderson, the real-life daughter of Anderson and Jovovich) to save the remaining 4500 uninfected people on the planet by breaking back into Umbrella Corp.headquarters to steal the only vial of an airborne antidote that will kill anything infected with the T-virus (which would include Alice herself) and unleash it in 48 hours. Although most of that time ends up being wasted as she is sidetracked by one thing or another, she eventually gets there with a small group of fellow survivors that include familiar face Clare Redfield (Ali Larter) and a bunch of newbies (including one played by Ruby Rose, who is apparently going to be in every single action movie sequel coming out this season) and penetrates the defenses of Umbrella one last time to retrieve the antidote, save humanity and, time permitting, get a few answers about what has been going on and her place in it all.

The critic in me must admit that, compared to the delightfully delirious excesses of “Retribution”—a film that so often crossed the border into pure surrealism that to describe it as Bunuelian would not have been entirely out of bounds—“The Final Chapter” is a little too staid at times for its own good. Having already given viewers a wild mashup of the entire saga in “Retribution,” Anderson has elected to close things out with a storyline that is as boilerplate as can be and which cannot help but pale in comparison to the more ambitious and outlandish narratives of the prior outings. The film also lacks a certain ambition in regard to the action sequences and visual style—while previous entries saw Anderson merging a surprisingly elegant cinematic sheen with the unbridled enthusiasm of a small child conjuring up breathless narratives with his toys into eye candy of a gourmet variety, too many of the action beats here are on the rote side and shot in such a dark and murky manner that it is sometime hard to discern what is going on at certain times. And while I suspect that no one will be too surprised that the ending does offer the possibility for future installments, Anderson leaves so many doors open in the end that you wonder why he even bothered to claim it as the conclusion in the first place.

Despite these objections, I nevertheless still found myself enjoying “Resident Evil: The Final Chapter” a great deal and while I cannot guarantee that everyone seeing it will feel the same way (those who have never cared for or even seen any of the previous films should probably strike at least one star off my rating), fans of the franchise should get a kick out of it as well. Like most films of its type, “The Final Chapter” is utterly ridiculous in every possible way but unlike a lot of them (I am looking at you, “Underworld”), it at least has a healthy sense of its own absurd nature that comes as a blessed relief. And a couple of the action bits are gloriously goofy to behold, including one where Alice battles a dragon—don’t ask—with a Hummer filled with C-4, and another where she dispatches a group of attackers while dangling upside-down from a snare.

More importantly, the film is driven by the inimitable presence of Milla Jovovich as Alice, the first female character to stand as the unquestioned center of a long-running genre franchise since Sigourney Weaver fronted the “Alien” films. Unlike someone like Kate Beckinsale, whose general contempt for the “Underworld” franchise can be detected whenever she is on screen, Jovovich is clearly having a blast doing these films. Even after 15 years of mashing mutants, she still brings enough energy and panache to the franchise, not to mention a commanding physical presence. “Resident Evil: The Final Chapter” may not be the ideal final note for the series but as long as Jovovich is up there doing her thing, most people will be too enthralled to notice. 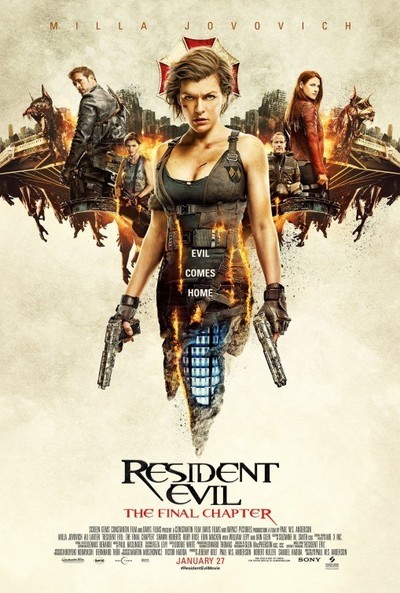 Rated R for sequences of violence throughout.