Here’s a fun game to play to keep your mind from truly wandering during a bad film: try and figure out exactly when the movie you’re watching went rotten. Was it a script that never should have been purchased? A concept that no one could have made work? Or did the problems start in pre-production, perhaps with the wrong cast or tech team being hired? Maybe the whole thing went to hell during production with a director who couldn’t manage tone or actors who checked out early? Or some bad films are tragically destroyed in post-production, sliced up in the editing bay. This is the game I played while watching the truly dreadful “Replicas,” and I went with “All of the above.”

With a concept that echoes “Frankenstein” and “Ex Machina” in its themes of playing God in a high-tech world, “Replicas” stars Keanu Reeves as Will Foster, a top employee at a company named Bionyne, where he is trying to basically transplant the human consciousness. In the film’s opening scene, Will and his lab partner Ed (Thomas Middleditch) receive a donor, a recently deceased man whose neural map they extract and implant into a synthetic form. It does not go well, as the consciousness understandably loses its cool when it sees metal hands and legs. Lots of yelling and ripping at metal ensues.

The foreboding failure of Will’s latest experiment pushes “Replicas” into its real story when the Fosters—including wife Mona (Alice Eve), eldest daughter Sophie (Emily Alyn Lind), middle child Matt (Emjay Anthony), and youngest child Zoe (Aria Lyric Leabu)—embark on a family vacation. A rainy night leads to a car crash and leads to four dead bodies, every Foster but Will. He calls in Ed, who is also an expert in human cloning, and demands that they merge their nascent technologies. They will steal clone pods from Bionyne, make clones of the family, implant their brains in the clones, and they’ll never know anything even happened. Of course, anyone who’s seen a movie can guess this will go poorly.

However, it doesn’t go poorly in the way you might expect. Or in a way that’s remotely plausible or believable. The biggest problem with “Replicas” is that writer Chad St. John and director Jeffrey Nachmanoff never figured out what story they were trying to tell. Hiding the bodies of your family while you build clones of them in your basement is undeniably insane even in a sci-fi world, as is pretending to be your dead children as you text their friends to keep up the ruse, but Nachmanoff and Reeves don’t lean into the lunacy of it at all. They can't figure out if Will is messing with the natural order of things or just a loving father we should look at heroically. This is the kind of part that Nicolas Cage would have eaten alive, realizing that Will needs to be portrayed as an all-out maniac for this movie to work.

As is, we’re not sure if we’re supposed to actually root for his playing God routine to succeed. It’s a movie without a clear opinion of its own protagonist, which means we’re unlikely to care too, and the whole thing falls apart in terms of storytelling. “Replicas” is also the kind of movie that throws around words like algorithm as if they mean something significant. “We need to get the algorithm!” They might as well have just called it a “doohickey.” At least that would have been funny.

"Replicas" is completely ludicrous on a dozen or so levels, but it depressingly avoids the camp or style needed to make an implausible story work as pure entertainment. We’ll go with your goofy story, filmmakers, if you give us a cinematic reason to do so. “Replicas” never does. Not even remotely. Most of it is shot in a flat visual style, and it’s all horribly lit and edited like a bad basic cable series. The whole thing has absolutely no life to it (other than a brief shot of a forlorn Reeves hugging a stuffed pink unicorn that feels like it should be GIFed). It made me want someone else’s consciousness embedded into my own to endure it. I could teach it a fun game to pass the time. 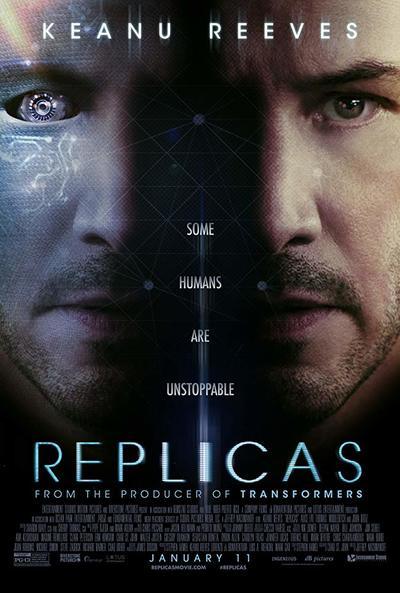