Wil Wheaton plays one of the scariest villains of the year in Jon Stevenson’s brilliant “Rent-A-Pal,” and yet his character never leaves the confines of a TV screen. He’s essentially a Mr. Rogers for incels, and those who know the power in how Fred Rogers acknowledged his viewers, and the creepiness in people online calling themselves “involuntarily celibate,” can imagine just how toxic that is. With such a disturbing performance, Wheaton treats the sweater-wearing, not-so-subtle misogynist with a constant knowing grin, an image conjured from a white VHS tape being viewed in 1990 that in turn embodies the bleakest parts of the internet. The tape that contains him and his acts of friendship say as much about whoever made it, as it does the person who watches it over and over.

Brian Landis Folkins’ genuinely sweet but lonely David comes across “Rent-A-Pal” while trying to find a girlfriend through a video-based dating agency that's like Tinder but for people with VCRs. At first it’s a novelty to David—as desperate as he may be from the beginning for someone to talk to other than his mother (Kathleen Brady), whom he lives with—but when the search for a date runs dry, the “Rent-A-Pal” tape sounds like amusing company. The video is just what it offers: Wheaton’s Andy offers company, and advocates having "a good time" with whoever is watching the tape. Andy asks questions and waits for answers, and follows up with flattering statements (“Nice digs!” he says, while pretending to look around the viewer’s apartment). What’s key is that he cares: he even has a phone next to him that he never uses to call, but instead hangs it up when it rings. For human beings that can be all we need—to just feel like we’re being heard—and the tape preys upon that. It's all prerecorded.

Once David gets the sense that he can talk to this person, that the video’s reactions are in sync with what he’s saying, Rent-A-Pal becomes a true connection for him. Sitting alone with a cup of whiskey in hand, he answers Andy’s questions about his parents, and about his personal life. Andy then bonds with the viewer, and ideas of entitlement, misogyny, and general anger start to flood in with his own monologues, all in the context that this is stuff guys talk about, that they don’t need anybody else. Especially after Andy shares a story about being humiliated by a woman, David is all ears. Sitting in his mother’s basement, with his TV providing the only light, David gets lost.

Watching Folkins watch this tape—to see the formation of this relationship—makes for one of the most original and riveting sequences of 2020. The movie takes its time in getting started, setting up David’s small world, but it truly takes off when a bond is built between a man you care about and a comforting figure on-screen. David learns how to interact with it, and Stevenson (working as editor) cuts it like an active conversation, so much that you forget you’re still just watching a guy talk to his TV. David gets the connection that he wants, and you believe that he achieves this in part by learning the video beat by beat. Not only is he memorizing it, he’s being programmed by it, with Andy’s sentiments shown to be stranger and more controlling, but effective. This scene, as part of Stevenson's excellent script, is an incredible, incisive distillation of the kinship people found in toxic boys clubs.

The movie is a fight for David’s soul, and it’s essential that while Stevenson takes the story to some strange places, he always believes in David. The scenes with him taking care of his mother with dementia show that he’s a good guy and a dedicated caretaker, even if he has to constantly brush off the way that his mother calls him by his father’s name, and that living with her has consumed his life. And then there’s Lisa (Amy Rutledge), a woman from the dating service who enters the picture midway through the movie, and makes for slightly whimsical idea of a perfect match for him. Both characters are too clearly written to make them innocent bystanders to David’s toxicity, filling in the roles of “mother” and “girlfriend,” but these scenes always bring the script back to David’s ultimate goal of not being lonely, to show the tragedy with Folkins’ gripping and empathetic performance. His reaction after a successful first date with Lisa is to sit in his car and scream “Yes!” to himself a bunch of times, as if finally he has accomplished something. The level of excitement shows such a desperation that isn’t encouraging, but heartbreaking.

The creepiest part of “Rent-A-Pal” isn’t David, but Andy. What history is behind that sweater vest, the knowing, constant grin, the very drive to make this video? These lingering questions are far more haunting than the destructive choices David later makes, and so the movie’s finale is a bit of a cheesy, gory mess, one that mistakes being audacious with being blunt. It feels like the easy way out on what to do about David, despite all of the script’s previous bold moves.

But “Rent-A-Pal” is transfixing whenever it walks that creative line between this simply being a video tape of unknown origin and it being a radical text—a prerecorded broadcast from one disturbed man with a camera, sent out to others who project their own meaning onto it. One of Stevenson’s brilliant choices is to set this story in 1990 so that it can clearly be about being online in 2020. A worthy double feature with Arthur Jones’ vital recent documentary about the cult behind the Pepe the Frog meme, “Feels Good Man,” "Rent-A-Pal" is about slipping into the darkest parts of the internet, and coming out the other side branded by hate. For all the nostalgia that comes with seeing David pop in a VHS tape, the movie’s time period allows Stevenson to focus our attention on the horror emitting from just one screen.

Now available in virtual cinemas and on demand. 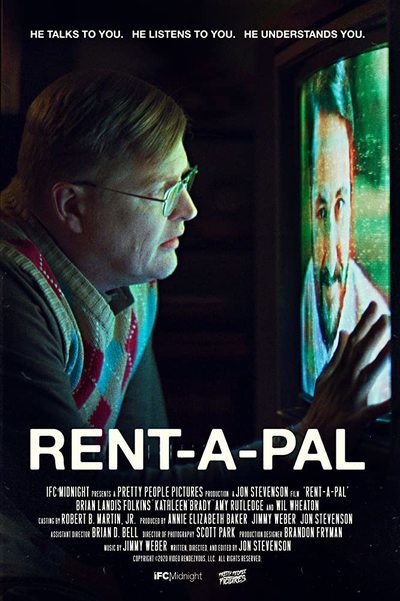