Time may feel like a flat circle, but the calendar says it’s January, so that means we get shoddy, dumping-ground dreck like the generically titled “Redemption Day.”

This would-be action thriller offers awkward action and no real thrills. The feature debut from director and co-writer Hicham Hajji boasts an impressive cast but then strands these performers in thinly drawn roles. The dialogue is clunky, the pacing drags, and the production values are so inconsistent that they’re often laughably cheap.

But perhaps the most baffling element of all is the superficial and retrograde way Morocco native Hajji depicts the Islamic terrorists in the film’s kidnapping plot. They are cartoonish in their villainy and overly simplistic in their demeanor and demands. One would think Hajji might be interested in presenting a more nuanced portrayal of the complexities that exist within the region; instead, he and co-screenwriters Sam Chouia and Lemore Syvan offer some title cards off the top about the significance of oil as well as a few cursory conversations between opportunistic American diplomats.

A pretty American woman is held captive for $10 million ransom. Only her badass husband, a decorated U.S. Marine captain, can save her—but he must confront his regrets and demons in the process. It’s a trite premise told in uninspired fashion, with dull, overlong tracking shots and an increasingly pushy score in place of actual drama.

The one thing that makes “Redemption Day” watchable on any level is the presence of Gary Dourdan as Brad Paxton. The longtime “CSI: Crime Scene Investigation” actor gets a rare shot at a leading role, but his compelling screen persona is sadly in the service of a barely-there character. He broods and shows off his brawn, and gives you the sense that he’s trying to imbue the performance with the kind of depth that simply isn’t there on the page. This is his version of a late-career Liam Neeson action vehicle—or it would be, if it were any good.

We know Brad is tormented, though, from a lengthy flashback at the film’s start. A mission to protect the transport of medical supplies across the Syrian desert comes under attack, and goes horribly awry. The memory of this ambush haunts him and awakens him in the middle of the night, and the comfort of his loving wife, Kate (Serinda Swan), provides little solace. Neither do boxing workouts and tough-love chats with his dad, played by an underused Ernie Hudson.

But then Kate, an archaeologist, travels from New York to Morocco to investigate the discovery of an underground city—and promptly gets kidnapped within minutes of arriving at the dig site, supposedly for crossing into Algeria by accident. (First, she’s stuck with insipid lines like: “Thank you so much for the hospitality.”)

When he finds out his wife has been taken, Brad springs into action, which provides him with the opportunity for the redemption of the film’s title … maybe? As in, he couldn’t save one of his fellow Marines, but he can save his wife, so that will help him sleep at night? The logic is fuzzy but that’s what we’re expected to hold onto as “Redemption Day” stumbles toward its climactic conclusion. Along the way, we’re subjected to endless drone shots of vehicle caravans and several shootouts, one of which is staged and filmed in such a cheesy way, it looks as if the character slipped and fell rather than taking a bullet to the head. We also see shadowy characters having scheming conversations, including Andy Garcia as the cigar-chomping U.S. ambassador to Morocco, Martin Donovan as some other duplicitous diplomat, and an unnamed character who can best be described as Colonel Sanders as deus ex machina. (Literally, the dude has a white suit, goatee, and walking stick and a comically thick Southern accent. It’s as if he sauntered into the wrong movie after having one too many mint juleps on the veranda.)

This is not the only unintentionally hilarious moment in “Redemption Day,” however. There’s also the conference call that takes place in the cramped and flatly lighted White House situation room, where the wooden United States president (Jay Footlik) says inane things like: “Bring me all the tactical options.” Meanwhile, back in North Africa, the lead kidnapper (Samy Naceri) screams at Kate in both French and badly dubbed English.

There is never any doubt as to how this crisis will turn out, nor is there any suspense or substance. There’s just Dourdan in a series of tight T-shirts and tank tops, saving the day from terrorists in a movie that’s even less welcome than it would have been under ordinary circumstances.

Now available in theaters, and available on demand and on digital January 12. 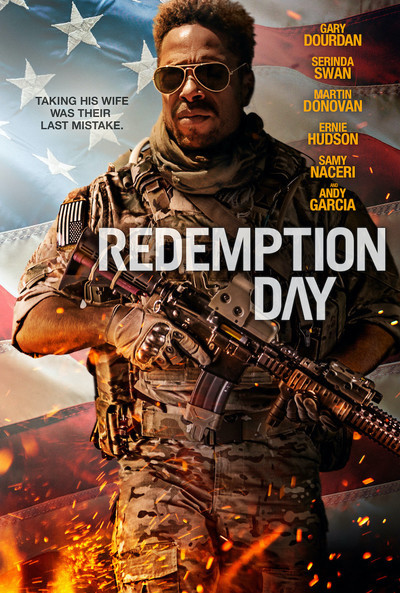