Rebels of the Neon God

Tsai Ming-Liang's debut film "Rebels of the Neon God," a youth-in-revolt story that's finally being released to US theaters 23 years after its debut, is the director's most accessible film. That will seem like a funny observation once you've seen it, because Tsai's most accessible film is more unusual and uncompromising than any you're likely to see this year.

The movie starts with the offscreen sound of a tropical storm battering a city, then observes two teenage smartasses, Ah Tze (Chen Chao-jung) and Ah Bing (Jen Chang-bin), crowding into a rain-smeared phone booth and robbing the coin box with crude tools. Hardly a word passes between them. They're both smoking the whole time; the cigarettes rarely leave their lips. The next half-hour unfolds with a similar paucity of dialogue. You're just watching Ah Tze, Ah Bing and a handful of other major characters walking, riding scooters, talking, studying, stealing motherboards from video games, arguing with parents, and acting and reacting within the context of their gigantic home city, Tapei—which, despite the film's references to established deities, is obviously the "neon god" of the title.

This is one of the great modern films about big cities and the mostly unacknowledged psychic toll of living in them. Early on, a dutiful but frustrated student, Hsiao-kang (Lee Kang-sheng), impales a cockroach with the sharp point of a compass and pins it to his desk to watch it die slowly—an expression of astonishing frustration and anger expressed in an offhand way. A couple of scenes later, he angrily tries to kill another cockroach clinging to the outside of his bedroom window, accidentally shatters the glass, cuts himself, and has to staunch the blood, to the alarm of his parents (Lu Yi-ching and Miao Tien). There are times when every character could be an inmate in a prison movie, doing whatever he or she has to do to make the time go faster. There are many shots of people in cot-like beds, sometimes having sex or pleasuring themselves but more often smoking or sleeping or staring at the ceiling. Tsai lingers on details that express great longing, sadness and mystery, such as a when the camera tracks a series of objects floating in floodwater on an apartment floor (including a crushed soda can and a cigarette butt), or when we observe Hsiao-kang exiting a campus building amid a sea of parked scooters to discover that his has been towed, for some random reason. (In the background we hear a young woman imploring cops not to tow her scooter as they're ignoring her and hoisting it onto a tow truck.)

Incredibly, though, considering how unpleasant many of the situations are, this is a different, vastly less oppressive feeling than we get from watching later features by the director, such as "What Time is There?", "The River" and last year's "Stray Dogs"—works in which the artist's gaze is more merciless, his shots more carefully composed and held at much greater length, and the characters' psychodrama even more pitilessly observed, to the point where you feel as though you're watching a whole society being figuratively drawn-and-quartered on a coroner's examination table. Here, when we watch lives of the student, his parents, the two petty thieves and their tag-along gal pal Ah Kuei (Wang Yu-wen), the circumstances feel awfully dire a lot of the time—the thieves'  apartment remains flooded throughout the film, and you often see debris and dead cockroaches floating on the surface of the water—and yet the youthful energy of the characters and the sheer ominous beauty of the movie's Tapei locations make the story, such as it is, feel oddly bouncy.

The stories of the petty criminals and the student are very loosely connected: Hsiao-kang follows Ah Tze around and spies on him, sees him smash the side view mirror of his dad's taxi, and spends the rest of the story trying and eventually succeeding at obtaining a petty and unimaginative sort of revenge (or "satisfaction"). But this attempt to connect or parallel the stories feels as arbitrary as those moments in a Robert Altman film where characters from different social strata are briefly glimpsed in the same scene or shot, riding the same bus or eating in the same coffee shop, as if to say, "Small world, eh?"

You never feel that Tsai is trying to shoehorn conventional devices into an unconventional project; it's more like he's practicing or experimenting with such focus and control that he always seems to be testing notions and propositions rather than just futzing around. "Rebels" is as much a film about observation and sensation and feeling as Tsai's subsequent movies, and it's also the unofficial opening chapter in what looks to be a loosely linked ongoing series, a la Francois Truffaut's Antoine Doniel films (with Lee Kang-sheng as his go-to hero). But it's lighter than much of his later work—improbably so, given the unstinting view of poverty cited throughout this review.
Advertisement


The opening credits sequence of the phone booth-jacking pals riding their scooters while glaring at the city is an example of what I'm talking about: it has a James Dean sort of cool, at once straightforwardly awesome, mockingly funny and pathetically deluded. (Dean's "Rebel Without a Cause" hero makes a kind of cameo via a poster hanging in an arcade.) In its way, this is the closest the director will probably ever get to making something like "Mean Streets" or "Badlands." It says, "The world can be cruel and cold, but it's still good to be young." 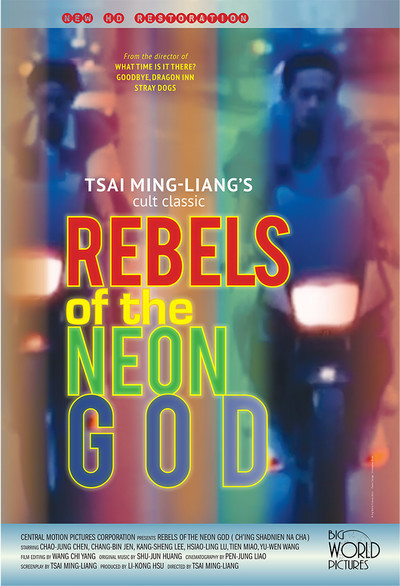