“Maybe it’s this year’s ‘Charlie Countryman,’” a friend and colleague pondered as we exited the screening of “Reach Me.” “Countryman,” for those of you out there fortunate enough to have not seen it, and I believe that covers most if not all of you—and Good Move, America!—was 2013’s Most Incredibly Bad bad movie. A Europeanized Tarantino-Inflected Slab Of Hipster Tough Guy Puke, enlivened in this case by the oily presence of Shia “I May Not Be A Garbage Human Being, But I’ve Got A Heavy Investment In Making The World Believe I’m One” LaBeouf. “Reach Me,” written and directed by John Herzfeld, is as it happens Incredibly Bad, but in a way that’s more “WTF” than “Countryman,” which was insufferable in a “let me out of here” way. Once you’ve sunk into the entirely warped groove of “Reach Me” you’re almost eager to experience the next offense against aesthetics and/or common sense it is poised to commit. And make no mistake: this is a movie that keeps on delivering, and for 95 solid minutes.

The movie takes its title from that of a self-help text written by an ostensibly reclusive author, and how this book affects the lives of a motley crew of made-in-L.A. yoyos, from a hip-hop star to a couple of disaffected hit men to a lone-gun cop with an overactive conscience to a young actress whose supposed big-break opportunity turns into a sexual assault. And more! Because the author of “Reach Me” doesn’t want publicity, and our Evil American Media believes there’s something wrong with someone who doesn’t want publicity, there’s the Internet Tabloid Mucky-Muck who thinks that the author needs to be Taken Down, and who sends a young minion who’s sold out to bad journalism when he ought to be writing the Great American Novel out to perform the task.

In case you’re wondering, yes, the movie does actively truck in the explicit tropes and conventions as described; it’s relentlessly brisk in laying out the hoary clichés. The scenario plays out as if a hyper 12-year-old who’s read too many hard-boiled graphic novels decided to concoct his own version of Paul Haggis’ “Crash.” But wait, there’s more. What if I told you that the Internet Tabloid Mucky-Muck was played by Sylvester Stallone, and he’s got a bunch of speeches in this movie that are full of multi-syllabic words and he’s trying to spit them out in some form of staccato delivery? As the guy on the Ronco commercials used to ask “Now how much would you pay?” Or that there’s a scene in which the self-help book author, played by a puffy and seriously disengaged Tom Berenger, breaks the Young Minion (Kevin Connolly, who initially appears wearing a fake beard that’s really pretty adorable) of his smoking habit by having him shout a magic sentence over and over again into the ocean at Redondo Beach? The casting really does make the film: the likes of Tom Sizemore, Thomas Jane, Danny Aiello, and Kyra Sedgwick have all of course delivered credible-or-better performances in their careers, but they all are capable of a certain, shall we say, broadness, and the unmitigated ludicrousness of the material allows all of them to go hog wild in the hamming-it-up-department. This leaves a less seasoned cast member like Elizabeth Henstridge sort of standing-at-the-sidelines probably thinking “What is HAPPENING here,” but it’s okay, she’s young, she’ll get over it.

Herzfeld’s wide trashy streak was of course highly evident from his very first picture, “Two Days In The Valley,” remembered these days largely for its Charlize Theron-Teri Hatcher catfight. “Reach Me” doesn’t offer anything as immediately memorable, although the scene featuring Stallone painting (as in fine art) deserves to be widely circulated on YouTube. It’s really got to be seen to be believed. I guess that can be taken as a recommendation, can it not? And that certainly wasn’t the case with “Charlie Countryman.” 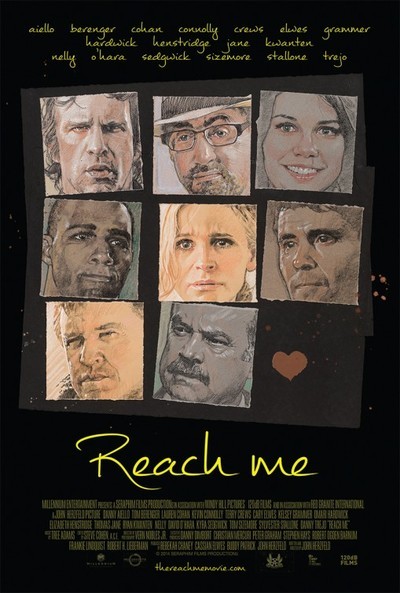