As delightful a proposition as "a Bollywood Romeo & Juliet" sounds at first glance, there still remains the question of execution. "Goliyon Ki Raasleela Ram-Leela" (or "Ram-Leela" for short), the film in question, fits neatly within what one  might expect from director Sanjay Leela Bhansali's literary adaptations—the most widely-known in the West probably being 2002's "Devdas" with Shahrukh Khan, Madhuri Dixit, and Aishwarya Rai—a visually opulent, proudly melodramatic entertainer with some great songs and star performances.

The scene is laid in fair Gujarat, in northwest India, where two rival clans have been warring for some 500 years and find themselves, in the present day, presiding over competing criminal empires, and spend their days armed to the teeth in open conflict in the streets of their village. The heir apparent to the poorer of the two clans, Ram (Ranveer Singh), disdains the gun violence that takes up so much of their day-to-day existence, preferring to hang out with his buddies and sell porn DVDs. One fateful day Ram sees, and instantly falls in love with, his female counterpart in the rival clan, Leela (Deepika Padukone). The feeling is very much mutual, and, per "Romeo and Juliet," the lovers have to deal with the conflict between their respective families, and the repercussions of skirmishes between them.

Bhansali hews fairly close to Shakespeare in the first half of the film, peppering the dialogue with references to the play and even including some exchanges in rhymed verse. After the intermission, he makes the wise decision to depart somewhat from the basic template, at the risk of a dip in pace, but which builds a considerable amount of suspense in the lead up the climax; even if you know "Romeo and Juliet" like the back of your hand, Bhansali's shift into more of a traditional warring-clans masala story introduces no small degree of uncertainty about how it's all going to end, which is quite the achievement with a text as familiar as "R&J."

What makes the ride as enjoyable as it is, and what truly give focus to Bhansali's lush, colorful compositions, are the performances of Ranveer Singh and Deepika Padukone in the leads. Singh prevails over a very odd (even by masala hero standards) mustache to give a deeply affecting and rich performance as Ram, but it's Padukone, as is increasingly the case, who steals the show with pure, deliberate, ferocious star power. The striking thing about her performance as Leela is how tightly coiled and tense it seems; she's ready at a moment's notice to kiss or kill (or both), never passive, never merely a photographic subject. The physical vitality of her work in the film is almost unfair to Priyanka Chopra, who cameos in an item number. Quite the movie star in her own right, Chopra seems insubstantial compared to Padukone, who's very close—if she isn't there already—to becoming the star among stars in her generation. Her every gesture is fascinating. She forces Singh to dial up his own not inconsequential star power in the scenes they share, which leads to a situation where we get to watch two wildly attractive actors giving their absolute all and meshing terrifically from a chemistry standpoint. If that sounds like fun, it most certainly is.

There are a couple of script and pacing hiccups in "Ram-Leela," most notably a regretful backsliding into regressive, lazy use of threatened rape as a means of heightening dramatic stakes. This is all the more unfortunate because Leela's family, run by her terrifying mother (an extraordinary Supriya Pathak), is a matriarchal criminal empire where the men, however much they may preen, absolutely defer. The pacing also dips rather badly in the middle and whenever Ram and Leela are separated, since from a dramatic standpoint their tandem star power is the engine that makes the whole thing run.

Those caveats aside, visual splendor and hot-blooded melodrama mostly win out over rickety pacing and scripting. Bhansali makes strong use of visual signifiers, particularly guns, which are introduced immediately and pervade throughout, and which in spite of being wielded by literally almost everyone in the film are never treated casually. There is always great import to the way in which guns are held and used, and the effects of their use are never elided. The other main recurring reference, skewering male vanity and pride gently though unsubtly, is to peacocks, which make a number of rhetorical and physical appearances. And so "Ram-Leela" is a handsomely-crafted entertainer with both smarts and heart, featuring two knockout lead performances, great songs, and plenty of the good kind of tears. 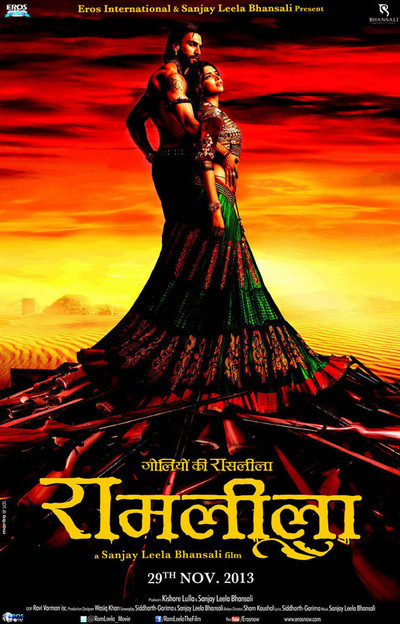