I believe that anyone who’s had frustrating dealings with the revenue service of the United States government ought to be able to empathize his or her way into feeling a wisp of sympathy for actor Nicolas Cage. While we don’t have his own confirmation on this one way or another, it’s widely assumed that the tax troubles publicized five years ago motivated what’s seen as his current “anything for a paycheck” mode of working, which sees him starring in such schlock as a reboot of the "Left Behind" movies, themselves based on novels that, let’s be honest, are crackpot extrapolations on Christian beliefs that actually have no basis in scripture…well, let me not go there. Point is, he’s doing oodles of stuff that, according to conventional wisdom, no Best Actor Academy Award-winner would've ever allowed himself to be sullied by. (The conventional wisdom has clearly never heard of the movie "Inchon," but I digress. Look it up.)

The ever-committed actor is invariably the most interesting thing in whatever schlock he turns up in, and that’s the case with "Rage," a payback thriller that’s not quite a gloss on "Taken." The reason he’s the most interesting thing here is not because his performances is particularly intense or eccentric but because everything around him is so wretchedly dull. “Pete, I’m out of the game, you know that,” Cage’s character, Paul, announces to a character named Pete, aptly enough, early on in the movie; dialogue like that only means the character’s going to be drawn back into the game at some point in the movie. Paul is a one-time criminal turned building contractor, which is a great profession for a one-time criminal to be in because there’s so little corruption in that field.

Anyway, he has a teenage daughter who’s the light of his life, and a teenage wife as well. OK, Rachel Nichols, who plays the wife, isn’t teenage, but she sure looks it, and once the aforementioned teenage daughter goes missing, it’s a pretty sure bet as to how she’ll end up, as movies such as this don’t have room for more than one teenage girl character, as such movies are all about men and what they’ll do if you mess with the teenage girls in their lives. Once his kid goes missing, Paul enlists his old running buddies from the criminal days, one played by Michael McGrady, who comes off like a buffed-up, trying-to-be-all-serious Larry the Cable Guy, and Max Ryan, whose business card should read “The Poor Man’s Titus Welliver,” and off they go committing sadistic acts and joking about it, breaking up underground card games and doing other forms of “where is she?” mischief, eventually, albeit unwittingly, starting a gang war. All this is much to the chagrin of a sympathetic cop played by Danny Glover and a wheelchair-bound mobster played by Peter Stormare.


This brings me back to my sympathy-for-Cage theme. Everybody gives Nic a hard time for these paycheck roles in wretched movies—and believe me, "Rage" is pretty wretched, a dull, lifeless thing even in spite of its efforts, old-school grindhouse picture-style, to put an exploitation-nihilist spin on the dad-with-action-movie-skills-on-the-rampage boilerplate—but, you know, Peter Stormare actually used to work for Ingmar Bergman, and he earns no disapprobation for turning up in the likes of this, let alone for egregiously hamming it up as he does. One of the odd features of these latter-day wannabe B-pictures is the way they pander to their more ostensibly distinguished cast member, in this case giving the characters played by Stormare, Glover, and finally Cage these Big Dramatic Monologues, each filled with hot air lines such as “Not everyone could get out as clean as you could.” The only way to get out of "Rage" clean is not to get into it in the first place. 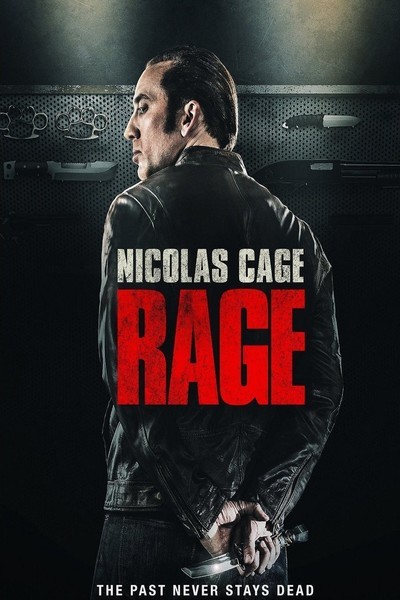