There's a reason why "R100," a deeply strange comedy about sadomasochism and other secular revelations, starts with a joke-y disclaimer. The film, which takes its name from an imaginary censor board's rating (like the MPAA's "R" rating, only forbidden to anyone under 100 years of ago), is deeply silly, but also startlingly outlandish, and more than a little punishing in its repetitiveness. This, of course, is the film's point. Japanese comedian-turned-filmmaker Hitoshi Matsumoto ("Big Man Japan," "Symbol") wants you to laugh at its lead character, Takafumi (Nao Ohmori), for taking pleasure from pain.

Takafumi is pathetic because he achieves sublime transcendence every time leather-clad dominatrices beat him up. Takafumi's masochism is, in that sense, not treated seriously—sorry, "Fifty Shades of Grey" fans!—because it's just the catalyst for a series of abidingly strange episodes that are all about one thing: escaping the hell that is yourself. Matsumoto's style of comedy is, in that sense, a far-flung descendant of Jerry Lewis' slapstick-y, self-loathing schtick. "R100" is, consequently, a comedy that tries to alienate you by suggesting that escapism is futile, all things inevitably devolve, and nothing inherently means anything.

"R100" may leave you feeling utterly defeated when it ends with Matsumoto's comedic variation on the Star Child finale of "2001: A Space Odyssey." But that's mostly because it will dredge up laughs from your gut even after it makes you hate Matsumoto for willfully repeating himself, then ducking his film's ickier conceits by diving into gross and seriously childish tangents. So even if you like bizarre movies, you'll probably like "R100," then hate it, then go back to liking it, then wonder what you're looking at. And then the movie will end.

Where was I? Oh, right, the plot. So, Takafumi gets kicked in the face, and thrown down a flight of stairs by a very sexy, terribly bored woman, which makes Takafumi realize how much he likes being dominated—not necessarily in a sexual way, mind you, though yes, there is a lot of that in "R100." Takafumi desperately wants to escape his dreary home-life, which consists of taking care of son Arashi (Haruki Nishimoto) while wife Setsuko lies comatose in a nearby hospital. So Takafumi joins a mysterious gentlemen's club whose services eventually escalate in perversity, from being dominated in a sushi restaurant to being flogged and spat on at home, right next door to Arashi's bedroom.

The longer that Takafumi enjoys being dominated—his cheeks puff out, his pupils bulge, and a pulsing halo surounds his head whenever he scales the heights of masochistic pleasure—the less he likes himself. So Takafumi tries to leave the gentlemen's club. But the more he tries to quit, the stranger his encounters with dominatrices like the Queen of Voices (Mao Daichi) and the Queen of Saliva (Naomi Watanabe) get. Like the time he's stood up at a bowling alley, and learns to enjoy being ignored for hours.

If you follow the logic (or lack thereof) of Takafumi's narrative, you'll find that "R100" teaches viewers how to watch it as its plot perpetually breaks down, then reforms. You cannot trust the film to deal with its dark subject matter since it's constantly admitting that Takafumi's search for carnal enlightenment is necessarily frustrated. Since Takafumi likes losing control, he keeps losing it until the film goes off its sprockets, and we get a fictitious behind-the-scenes look at perplexed filmmakers and censors behind the film. Sorry, "the film." Then the movie starts again. And then it stops, then starts again. If you try to get closure from "R100," it will beat you. 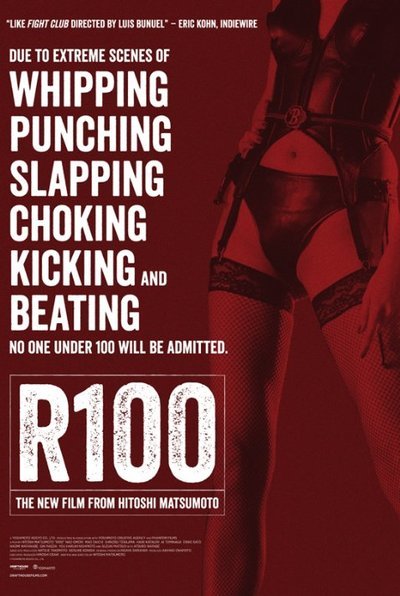