My head hurt almost instantly into the six-hour experience that is HBO’s new docuseries, “Q: Into the Storm.” Creator Cullen Hoback tackles nothing less than the weaponization of the internet in his six-part series, and he wastes no time throwing out dozens of conspiracy theories, both the broadly familiar ones like Pizzagate and those you probably haven’t heard about like how the battle cry for these people comes from Ridley Scott’s “White Squall” of all places. “It changes the lens through the which you see the world,” says a believer. Uh huh. Another subject describes the entire Q thing as “Part interactive game, part religion, part international movement.” That’s about right.

Luckily, Hoback is a smart enough filmmaker to pull back and try to see the whole picture while he digs into the identity of Q and how internet communities shaped international events. The headache dissipates. Hoback frames himself as a director who believes in free speech and not silencing Q followers, at least at first. To be fair, long before an actual insurrection at the U.S. Capitol, Q felt mostly like a game in 2018 when Hoback started his documentary that had as one of its goals unmasking Q, which could have brought an end to all of it. Who could have guessed how much that wouldn't happen?

“Q: Into the Storm” profiles the faces of the Q movement from YouTube personalities to the admins of the boards on which he posts his drops. If you’re unfamiliar, Q is someone or a group of someones who started posting clues that his followers tied to increasingly insane conspiracy theories in late 2017, most of them centered on the concept that there are cabals of powerful politicians and celebrities who regularly commit some of the vilest crimes imaginable, including cannibalism and pedophilia. The belief was that Q was a power player himself, someone with inside knowledge who could take down these awful villains of society, and that Trump himself would help make this happen. Some people even think Trump could be Q, or one of his BFFs like Roger Stone or Steve Bannon (my personal #1 suspect). “Q: Into the Storm” investigates all of these theories.

Naturally, Hoback starts with a focus on the origins of Q, and carefully presents some of its major players in a light that’s intentional. For example, when he introduces Jerome Corsi, one of the most prominent defendants of Q’s alleged insider information, Hoback drops in that he was also a major proponent of Birtherism and doesn’t believe that Hitler died at the end of World War II. Not exactly the voice of reason. Hoback very carefully and smartly doesn’t mock the Q believers so much as give viewers all the information they need as to whether or not they should believe these people fully. He deftly points out how much they believe only that which fits their narrative. Every time Q gets something right, it’s a sign that he’s an insider. Every time he gets something wrong, there’s a reason for it. One realizes how much the Q thing is like a fake psychic, guessing at what might happen in a way that makes people believe.

If you’re thinking that six hours of conspiracy theories about basements of pizza joints filled with dead children might be a bit much, Hoback’s work is smarter than that. He really digs into the people around the Q phenomenon, focusing a lot of time on the 8chan admins, particularly Fredrick Brennan, the creator who has now disowned his own monster given how much its impacted racial violence in the world, and Jim & Ron Watkins, a father and son who thrive in this world of online conspiracy chaos. There are even theories that either or both are Q, and Hoback’s project gains its greatest strength from how much he befriends Ron, Jim, and Fred, asking just the right questions in interviews to reveal the complex nature of this world. There’s infighting and back-stabbing even in the world around Q, and that material is way more interesting than people who believe Trump is still President. Profit always produces that and the truth is that some people have made a fortune pushing the world of Q—the question that lingers is how that monetization of conspiracies has impacted politics.

The often-casual tone that Hoback employs, so that your head doesn’t explode thinking about Q, doesn’t always work. After all, some of the events around Q have included violence like the shooting at Comet Pizza and countless death threats against those who oppose these crazy theories, and some early episodes zip past these events a bit too easily, although later ones take the emergence of violence from the QAnon world more seriously. And the truth is the tone reflects the odd nature of some of these people, like how Jim Watkins can casually discuss mass executing politicians while making a kale smoothie. There’s a fascinating ordinary quality to it all.

While “Q: Into the Storm” investigates a lot of recent internet history—there’s even a dip into Anonymous and Gamergate—it does feel a bit unfocused in later episodes, particularly chapter five (in which Hoback, a genuinely empathetic guy, basically finds himself trying to save the very life of one of his new friends). By that point, we’ve spent a lot of time with all of these major players, and Hoback struggles with how to bring this project in for a finale. He tumbles a bit himself as he goes down the rabbit hole, losing some of the focus of the best episodes of the series. Maybe that’s intentional? After all, at one point in the second episode, someone suggests that only Q would do a documentary about himself, suggesting that Hoback could himself be Q. For people in this world, anything is possible.

“Q: Into the Storm” starts Sunday, March 21st on HBO and runs for the next five weeks. 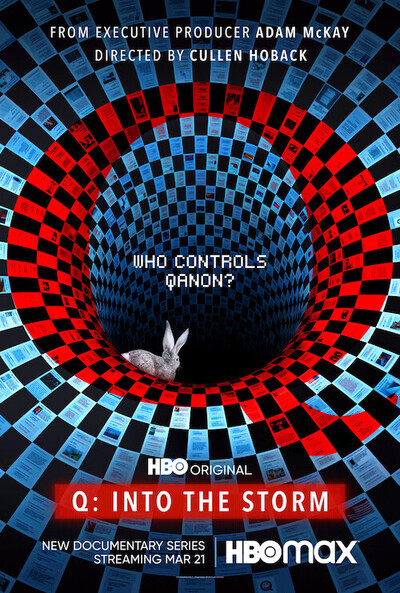