Documentary filmmaking has a habit of reminding us of a truth that many would like to ignore: monsters are very real. As children, we’re told by our parents that boogeymen don’t exist and that most people are inherently good. Both of these things are true, but we often convince ourselves that true evil is something of fiction. “Prophet’s Prey,” the latest documentary from Amy Berg (“Deliver Us From Evil”), reminds us that there is unimaginable horror in this world, often perpetrated in the name of religion and under the banner of salvation. The film opens in limited release today, September 18th, before a Showtime premiere on October 10th. It is harrowing and stomach-turning. While I wish the form of the film wasn’t quite so talking-head—“then this happened”—the story is so compelling and terrifying that it’s hard to place too much cinematic flourish on top of it. It speaks for itself. And what it says is scarier than any horror film this year.

Sam Brower is a private detective who spent much of his life trying to bring the horror of the Fundamentalist Church of Jesus Christ of Latter-day Saints to light. It’s chronicled in “Prophet’s Prey: My Seven-Year Investigation into Warren Jeffs and the Fundamentalist Church of Latter-Day Saints,” the main basis for this film, although Berg also works heavily from Jon Krakauer’s excellent “Under the Banner of Heaven” (a book you really should read, along with his “Into the Wild” and “Into Thin Air.”). In fact, Brower and Krakauer approached Berg with the idea to make the film, and both appear regularly in “Prophet’s Prey,” as leading experts on the saga of Warren Jeffs, his dozens of “wives,” and the damage a self-proclaimed prophet perpetrated on hundreds of people, including his own relatives.

Warren Jeffs was the son of Rulon Jeffs, another self-proclaimed prophet and the leader of the FLDS. The film argues that as the senior Jeffs was nearly on his deathbed, Warren worked his way into the position of rightful heir. In 2002, he became “President and Prophet, Seer and Revelator” of the FLDS. While Rulon Jeffs may have committed unspeakable crimes himself (he may have had 75 wives and 65 children when he passed, and many of his wives were underage), “Prey” makes the case that the evil of the father was amplified in the son. Even before his father passed away, Warren was using his position in the church to rape young girls in the name of religion.

Warren Jeffs took his power a step further than his pedophilia, ruining the lives of anyone who dared challenge him. Within his institution, he had the power to “re-assign” wives—as if they were cattle moving from one barn to another—and would break up the homes of anyone who dared call into question his relationship with a higher being, one who regularly spoke through him. His almighty oversight of a compound of his followers made him invincible, until the government took notice.

After a woman called the police to report that she was married and had given birth at the age of 15, they raided the largest compound of the FLDS, where they suspected Jeffs might be holed up, and took hundreds of children into custody. The case quickly fell apart, but Jeffs was still on their radar. The accusations started piling up and really didn’t stop. Even relatives of Jeffs, including his nephew, accused him of sexual assault. He was marrying 14-year-old girls over and over again, telling them it was the prophet’s will. An arrest warrant was issued for rape in 2006, and Jeffs rose to #2 on the Most Wanted list, right next to Osama Bin Laden. He was arrested in 2006, and went to trial, one in which he did little more than take the 5th amendment. He is serving in life in prison, but still exerts control over his church.

Clearly, there’s a terrifying story to be told here about unchecked, unregulated power, and the horror that happens when it’s given to a madman. Berg is a very technically proficient director, and the film moves along at a nice clip, aided by a score by Nick Cave and Warren Ellis. There were times where it felt a bit too routine to me, a problem in true crime documentary filmmaking in that it’s really the subject matter and not the filmmaking that often gets the most critical attention. This is a story that should be heard, even if it turns the stomach, and Berg gets out of the way of it for the most part, letting Jeffs’ own relatives and those directly impacted by his reign of terror do the talking. At one point, I wished that there were more female interview subjects (although one who escaped the nightmare of FLDS is riveting) and then I realized that Berg and her team probably couldn’t find many women directly impacted by FLDS who were willing to talk. Hopefully, “Prophet’s Prey” will give those women the power to escape and make their voices heard. 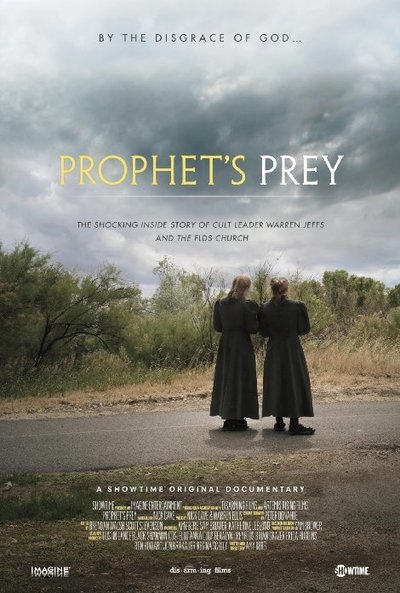