Depending on who you believe, YouTube is either a hive of copyright-infringement scum and villainy of massive proportions, or it’s a tool of creative ferment, fervency, and fulfillment like no other. I suppose it’s capable of actually being both. This entertaining narrative documentary is very firmly in the ferment/fervency/fulfillment camp.

“Narrative documentary” sounds like a redundancy so I’ll explain the specific way I mean the phrase. That is, Ido Haar, the director, shoots and edits the film to tell a screen story, making the actual people in it his characters. There’s no narration, no talking head interviews, but, rather, the impression of cinema-verité, getting it as it happens storyline. Which seems like an improbable thing for the filmmaker to honestly pull off, because the movie tells two parallel narratives. After a brief introduction chronicling an event at New York’s Guggenheim Museum, celebrating the works of “free culture” pioneers which includes an Israeli musician named Kutiman whose art is based on mashed-up YouTube videos, Haar reveals Kutiman—real name Ophir Kutiel—working out of a small house on a kibbutz in the Negev Desert. For long periods, he is a shut-in exploring the world on his computer. He finds videos of people playing instruments, giving online music lessons, or even just goofing around, and when he hears a sound or a riff he likes, he collects it, and soon he’s layering those snippets like his computer screen is a piece of multi-track audio tape; through looping and echoing and applying effects he’s soon constructing a kind of original piece of music. His work is a pretty impressive example of recombinative creativity, one with peculiar implications and resonances, so to speak.

Meanwhile, across the world, in much more impoverished circumstances, a young woman named Samantha, who posts videos to YouTube under the name “Princess Shaw” is singing a cappella into her iPhone. It’s a form of release during her days caring for ailing seniors at a nursing home. While her videos lack in production value, her voice is noteworthy, with echoes of both Amy Winehouse and Nina Simone, and her song craft is almost uncanny. Several of her tunes capture the attention of Kutiman, who begins crafting compelling “backing tracks,” so to speak, for her work.

“Wowsers,” one might be apt to think early on. “What a fantastic coincidence that Ido Haar had someone on the case with Princess Shaw at the same time as he was chronicling Kutiman’s work!” And, as the film goes on, one might be apt to think, “What kind of sucker does Ido Haar take me for, anyway?”  As an article in The Guardian phrased it, Haar’s “filmmaking ethics may lead to healthy post-screening discussions in the lobby.” In my book Haar is lucky if that’s ALL they lead to. As it happens, Haar and company hied to New Orleans soon after Kutiman “discovered” Samantha; so, the Kutiman “collaboration” was happening even as, say, Haar was shooting Samantha stuck roadside after her car broke down, or when her electricity got turned off after she couldn’t afford the bill one month. Under the pretext of “making a documentary about YouTube singers,” Haar got Samantha to reveal a lot about her abusive past and the struggles of her present. It’s a good thing—semi-spoiler alert—that things all turned out well in the end, relatively speaking. Although it’s less than an hour into the documentary that you might be apt to yell at the screen to Kutiman, “Will you just CALL this woman already?” (Especially heartbreaking is her visit to a “The Voice” audition.)

Still, the movie rates three stars because, ethical or no, it’s a pretty involving piece of storytelling, and because Princess Shaw herself is such an immediately engaging, sympathetic, and inspiring figure. Who happens to write wonderful songs. Songs that, I have to admit, the clever Kutiman’s settings really do complement. I’m looking forward to getting the soundtrack album. And hoping there’s a next Princess Shaw album in the works. 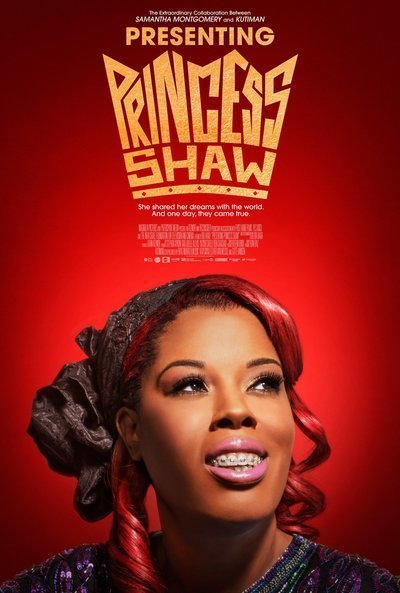