A candy-colored, feather-light voyage back to the styles and mores of France in the 1950s, Régis Roinsard's "Populaire" inserts the conventions of romantic comedy into the context of a now little-known and long-bygone sport: competitive speed typing. While the welding of two genres produces a rather odd amalgam—imagine a Doris Day-Rock Hudson vehicle imbued with the spirit of "Rocky"—deft execution by Roinsard and his appealing cast make the film a solid, genially retro entertainment.

The film doesn't announce its sports theme immediately. When it opens, provincial lass Rose Pamphyle (Déborah François), impatient with the limited options of small-town Normandy, goes to the town of Lisieux and bids for a secretarial job with insurance executive Louis Echard (Romain Duris), who's skeptical until she impetuously demonstrates her self-taught but impressive typing skills.

Not only does she get the job, but Louis asks her to move in with him. She explodes at this, but misunderstands: he doesn't want her as his mistress. He wants to oversee the development of her manual gifts. In short order, he transforms himself into her coach, and begins to wean her away from her frenetic two-finger method.

Before long, their office work is seldom mentioned as Louis and Rose together begin aiming her more polished skills toward the arena of typing competitions. (Apparently these were quite popular some decades back, even if they didn't leave much of an impression on popular culture. Maybe they'll have a revival, now that typewriters are enjoying a certain return to vogue.)

Once the narrative trajectory becomes clear, the viewer may well wonder: Can a movie really sustain interest merely with a succession of competitions in which a bevy of nervous, chicly attired young women (there were no men in this sport, apparently) flail away at typewriters, trying to set the record for keystroke-count? The answer, happily for "Populaire" (the title refers to a model of typewriter), is mostly yes.

Though this viewer could have done with one or two fewer rounds, the rise from local to regional to national (in Paris) to global (New York) competitions is engaging, at times even breathlessly exciting, thanks to first-time director Roinsard's exuberant staging and the expert technical contributions offered up by ace collaborators including "The Artist" cinematographer Guillaume Schiffman, production designer Sylvie Olivé and editors Laure Gardette and Sophie Reine.

These artists together conjure up a vision of the '50s as full of plush colors and wide-screen compositional classicism as many of the hit films of that era, and, in fact, they seem more indebted to various vintage Hollywood landmarks, from "An Affair to Remember" to "Some Came Running," than to French films of the same time. "Populaire" was reportedly one of the most expensive of recent French productions, but no one need apologize: all that money is on the screen, providing a playful, knowing visual élan that's one of the film's key pleasures.

Another factor that keeps the competitions' interest from flagging is the winning presence and performance of newcomer Déborah François. With her blond looks somewhere between Sandra Dee and the young Catherine Deneuve, and her general pertness obviously inspired by Audrey Hepburn, François' Rose not only seems to embody the period, but also is a convincing model of athletic grit and determination.

If Romain Duris' often sour-seeming Louis comes off as less engaging, that's due more to the conception of the character than the actor's able performance. Rose falls for him long before he reciprocates, which leaves him feeling oddly withdrawn and recessive. Is it because he's become obsessed with being the girl's coach at the expense of all else, or does he harbor some problematic secret that makes him commitment-phobic? Actually it's more the latter, a secret that involves his best friends, an American guy (Shaun Benson) married to a French girl (Bérénice Bejo) whom Louis has known since childhood.

This, however, is simply one of those contrivances designed for one end: to delay the big romantic breakthrough as long as possible, all the way, in fact, to the point where Rose is in a packed New York auditorium facing the tight-lipped American gal who's already won the world championship twice, as typing fanatics around the world listen in. In the end, though, creaky storytelling mechanics in the tale's romantic department don't undermine its emotional finale, which serves up the expected pay-offs for devotees of rom-coms and unlikely-sports movies alike. 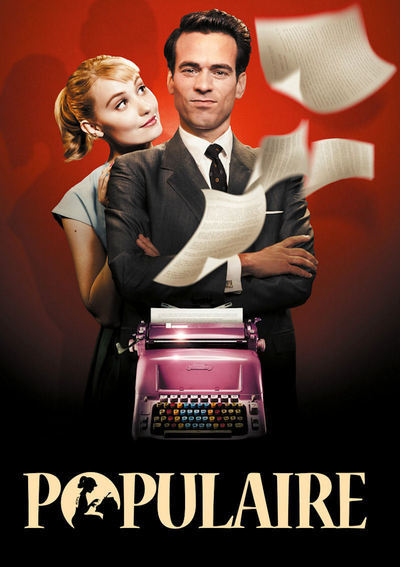