Pope Francis: A Man of His Word

Whether Christianity is your jam or not, I recommend that you who like to travel the world take a trip to the Vatican. And if the Pope is home, you should try to see him, as being one speck in a crowd to view His Holiness can prove to be a nonpareil life experience. It also proves how some human beings on this planet simply have a presence that's beyond words.

Director Wim Wenders, who like Martin Scorsese once wanted to be a priest but went onto make some directly religious films instead, doesn't seek converts with "Pope Francis: A Man of His Word," so much as to put His Holiness' wisdom out into the world. Wenders does this by capturing Pope Francis' very presence on a major and minor scale: There's the rock star presence of him speaking before masses of enraptured, emotional fans, whether in Rio de Janeiro, or to inmates in Philadelphia, who hang on his every word about forgiveness.

But "Pope Francis: A Man of His Word" can captivate when that charisma translates to sitting in an empty room with him, an experience that Wenders' austere filmmaking provides his audience. As His Holiness speaks succinctly about an endless list of issues tearing apart the world (including but not limited to: the environment, immigration laws, the global economic imbalance, the state of the family), "Pope Francis: A Man of His Word" is a non-denominational sermon, under the cinematic care of an artist first, Pope Francis fanboy second.

If the Pope is one of the ultimate talking head subjects for any documentarian, Wenders makes an especially productive decision to use an Interrotron for the four interviews he had with Pope Francis (referring to Errol Morris' device that allows documentary subjects to look directly at the camera when speaking to someone asking a question). As the film hopscotches from one issue to the next, Pope Francis opines on them clearly, sometimes even repeating or asking to underline certain ideas. Aside from a wisdom that seems to come most of all from traveling the world and meeting so many people, he has a gift for making pocket-sized revelations, like when he says "love is a choice," or how the rich are killing the Earth with a "globalization of indifference." More than regular talking-head interviews, Wenders' camera does not often cut as Pope Francis speaks, allowing long takes to let the holy man's wisdom linger. Throughout the film, Pope Francis' equal mastery of calculated speaking, and listening, is on display.

Biographical details are low on the priority list, aside from Wenders honing in on what makes Pope Francis a different kind of pope—his resistance to the more extravagant parts of the papacy, his progressive stances, and his designation as the first pope from the Americas. Instead, Wenders connects Pope Francis' life to those of St. Francis of Assisi, who is presented in black-and-white images living a life of no wealth, completely in tune with nature, as if it were a 12th century superhero prequel story. It's during these passages in particular that Wenders productively chimes in, as when he says "we are still living on the planet upside down ... as if we were its masters, not its caretakers."

Wenders received final cut on the project, a refreshing testament to how "Pope Francis: A Man of His Word" feels like it's filled with the curiosities and passions of an artist, instead of the goals of an institution. On its own, the doc can be powerful, as when we behold the endless crowds of people who have gathered to see Pope Francis. Or poignant, like with a shot from inside the papal helicopter, catching both a contemplative holy man sitting by a window, and the thousands of people down below on the ground waiting for him.

That being said, even Wenders can't stop how the project's goal makes for something more fleeting than rewatchable. That's in part because the doc become numbing as it goes from one crises to the next, its checklist nature accompanied by a wilting score, with some passages awkwardly connected to the next.

But this is a food-for-thought doc that wholly justifies its existence. In particular, "Pope Francis: A Man of His Word" recalls the many recent, alarming docs about the current state of the environment. Albeit this time, the stakes are even higher and concern our collective soul. Like those movies, "Pope Francis: A Man of His Word" finds a balance between sobering worldwide footage of conflict and genuine seeds of hope. So while it's up to the viewer as to what they do with Pope Francis' very valuable two cents, the film's call to action can be as simple and vital as empathy. 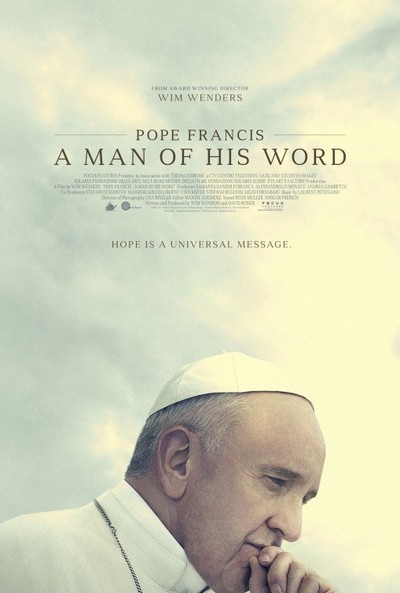 Pope Francis as himself