A movie can get away with anything if it can convince you it believes in itself. Theresa Connelly's “Polish Wedding” doesn't succeed. Too many scenes float above reality, going for cuteness and colorful dialogue and zany quirks, until we begin to question the very possibility that these wonderful, full-hearted characters could actually exist in a suburb of Detroit--or anywhere.

The movie tells the story of a Polish-American family awash with secret romance, buried passion and fierce pride. Jadzia Pzoniak (Lena Olin), the mother, is a cleaning woman. Bolek (Gabriel Byrne), the father, works nights as a baker. The family lives in one of those houses you see only in the movies--where everyone's always looking out the window, and lots of things happen in the yard. There are four sons and a daughter, and the boys all seem to sleep in one bedroom, which is not impossible--but a thrifty Polish-American family who has had two working parents for more than 20 years is more likely, I think, to be living in a larger house by now, instead of one that seems artificially cramped for movie purposes.

Jadzia and Bolek are not happily married. Jadzia says she married her husband for a good reason, but just at the moment she can't remember what it was. She dresses in some kind of women's auxiliary outfit once a week and goes out to her “meeting,” which consists of a liaison with her lover Roman (Rade Serbedzija). He's her boss at work. You might therefore wonder why she's still a cleaning lady, instead of being promoted to receptionist or something, but there's a scene where he enters the restroom she's cleaning and she hurls him to the floor and pounces on him for some inappropriate behavior in the workplace; maybe he'd miss that.

Jadzia's daughter Hala (Claire Danes), a teenager young enough to be cast as the virgin in the church procession, is sneaking out nights, too, to see a young cop named Russell (Adam Trese). She gets pregnant and tells her dad, “My clock stopped.” What clock? “Every woman has that kind of clock that she tells her time by.” That leads to the double climax, in which the serenity of the procession is much tested, and the entire Pzoniak family marches on Russell's house for a singularly unconvincing confrontation.

“Polish Wedding” is the kind of movie that cries out to be set in a country I know little or nothing about. Maybe I would believe this colorful behavior in Albania, or in one of those Italian comedies where Sophia Loren knew everybody in town, biblically and otherwise. In a Detroit suburb, I don't imagine carefree people gambol in the fields and gather around the breakfast table for family conversations apparently inspired by sitcom dialogue. Oh, I believe all the things happen in Detroit that happen in this movie; I simply don't believe people rant and rave and posture and emote so wildly while they're happening. A lot of the time I'll bet they're monosyllabic, and even during their emotional peaks still spend a lot of time watching TV.

Lena Olin is an actress who could have gotten away with this role, in another movie in another country. She brings it great life and conviction, but since the movie never connects with the world around it she seems, alas, more crazy than colorful. Gabriel Byrne's character is written as an enigma and he plays it as if it's certainly an enigma to him. Claire Danes seems too old for some scenes and too young for others; her character is a utility infielder, playing all positions and trying to field whatever's hit at her.

The movie's mixture of sex, religion and family craziness reminded me of “Household Saints,” the Nancy Savoca film in which Lili Taylor's grandmother believes in saints, her parents believe in the American dream, and Lili, by seriously desiring to become a saint, does what would make her grandmother happy and her parents miserable. All the generational values are squished together in “Polish Wedding.” We're not looking at behavior, but at a lot of dubious anecdotes. 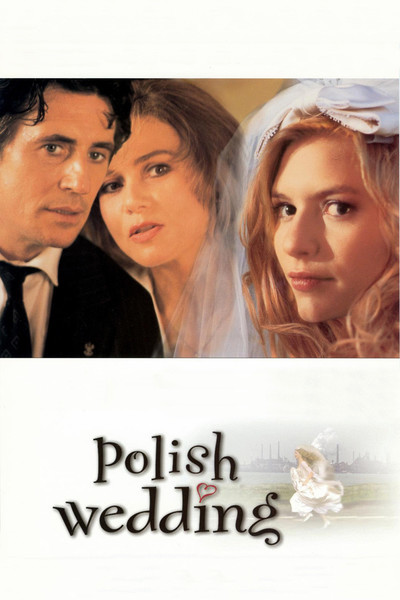