This week’s episode of “Good Actors, Less Than Ideal Script” opens with Alan Tudyk in a tent with a face-painted man, seeming to reenact a scene from Ken Russell’s “Altered States.” Becoming visibly sick upon drinking some kind of hallucinogenic potion, he says “This is not quite the spiritual awakening I was looking for.” And then keels over.

After an opening credit sequence with typeface, credit ordering, and layout that suggest early Wes Anderson—and hey, what do you know, the cityscapes beneath the title tell you this picture was shot in Houston, where Anderson grew up—this movie, written and directed by Scott Brignac, introduces its main players. Hannah Kasulka and Luke Benward, attractive actors who, I predict, will be steered toward Hallmark movies by their agents in the not-too-distant future, play Rachel and Micah (it is perhaps no accident that they are given Biblical names, people). Fraternal twins and low-level con artists, they work grifts from the you (the mark that is)-had-it-coming variety (charming street musician is mugged and loses her guitar!) to the more actively despicable (fake kids’ charity with added distraction of fake friendship). Micah, the more aggressive/ambitious of the two, got $100,000 on one of his cons. Problem is, his mark is now onto the twins, is a psychopath, and wants double his money back.

So the kids have to swing for the fences just to stay alive. That’s where Tudyk’s character, referred to the duo by some kind of Mark Referral Service, comes in. His Ben is a self-made millionaire who’s lost his family and, after several failed spiritual awakenings, has taken to going to Houston churches and drunkenly haranguing the Almighty. He’s got a safe in his mansion. Micah hatches a bold plan: to actually introduce Ed to God.

The twins enlist their former criminal mentor—the venerable role of the guy who taught the crooks everything they know—Frank (Michael McKean), fresh out of prison and back running his roller rink. Having sold Ed on the crackpot talk-to-God idea, they buy an intimidating suit for Frank and prep him for some serious Dressing-Down-Job action. One of the first things Frank tells Ed in God mode is “I find your lack of faith disturbing.” I understood that reference!

The premise here is not unpromising but the execution—indeed the whole aesthetic—is something like “The Grifters”-Lite. The script teems with exposition clunkers like “We need to gain his trust” and fairly glib character dynamics. As such, we just know that Rachel is the half of the pair that’s going to undergo qualms of conscience, if only because Rachel’s the only half that has any ostensible social relations outside their bubble.

Micah drops his most stomach-churning suggestion—that Rachel impersonate the dead daughter for whom Ed constantly grieves—before a plot reveal that, upon mere seconds of reflection, renders the con artists’ actions up to this point nonsensical. After which it’s downhill to “this wasn’t part of the plan.”

The movie’s ending, with a scriptural bow that underscores those Biblical names, suggests that what Brignac was after has not too much to do with what ended up on screen: a parable of forgiveness with genuine theological heft. I might have enjoyed that movie better. I reckon Tudyk and McKean might have as well. 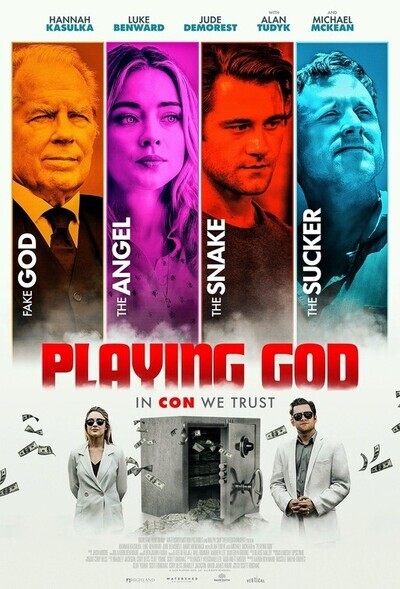