By an odd coincidence, 2017 has seen the release of two works that combine the talents of award-winning Hollywood actresses and acclaimed European filmmakers and include such elements as Americans in France working on the fringes of the entertainment industry, intense sibling bonds and a supernatural turn involving an obsession with contacting the spirit world and a brief glimpse of something that just might an honest-to-goodness apparition. The first was “Personal Shopper,” the brilliant and haunting second teaming of director Olivier Assayas and actress Kristen Stewart that is one of the very best films to emerge this year. Now comes “Planetarium,” a film that looks promising on paper but has no idea how to put its ingredients together. The result is a bit of a mess and an oftentimes dull one at that, the kind of bland cinematic Euro-pudding that Miramax used to release in bulk back in the day.

Set in France in the years immediately preceding the onset of World War II, the film stars Natalie Portman and Lily-Rose Depp as Laura and Kate Barlow, a pair of American sisters who are barnstorming through Europe with a supernatural seance act in which Kate is the one contacting the spirits while Laura serves as the emcee and manager. After a performance in Paris, they are summoned to the estate of wealthy film producer Andre Korben (Emmanuel Salinger) to perform a private seance in which something does happen. Andre is so taken with the results that he decides to make a movie inspired by it that not only star the sisters but will hopefully capture the image of an actual spirit on film. A screen test is shot and it turns out that while Kate is the one with the supernatural abilities, it is Laura who proves to be a natural in front of the camera.

At first, Laura thinks the idea is absurd—she isn’t the one with the powers, after all—but before long, she takes to her new career in ways that propel her into stardom and its usual trappings while at the same time separating her from her beloved sister. As for Kate, she goes off with Andre to an institute for the paranormal that he believes will help him recreate the earlier seance and film a genuine spirit with the aid of a collection of bizarre machinery straight out of a Ken Russell movie. Andre plunges so much money into pursuing this obsession that his entire company teeters on the edge of bankruptcy. While all of this is going of, of course, the winds of war are beginning to blow, bad news under any circumstances but especially bad for Andre, who has a secret regarding his heritage that threatens everything.

The film was co-written and directed by Rebecca Zlutowski and the opening scenes are intriguing as we are introduced to the two sisters and their bond and observe Kate’s otherworldly abilities and Laura’s tentative first steps into the French film industry at a time when it was beginning to change to catch up with what was going on in the States. Before long, however, the narrative devolves into a series of subplots that, with one exception, do not work on their own, and which never pull together into a satisfying whole. Laura’s adventures, which include a romantic entanglement or two, are profoundly uninteresting and never address her feelings about her separation from Kate. The war element doesn’t really come off either and just appears to have been tossed in at random to lend the story more dramatic heft. (We even get a moment where everyone at a garden party stops to sing an inspirational rendition of “La Marseillaise.”) The most interesting stuff involves Kate and Andre and all the strange gadgets employed to hopefully put a ghost on film but it winds up getting the short shrift to make room for the more conventionally melodramatic moments.

Not even the star power that Zlutowski has deployed is enough to make “Planetarium” work. Natalie Portman is a wonderful actress, to be sure, but her work here will not rank on any list of her greatest performances. She doesn’t do anything bad, per se, but you never get a sense of her connecting with the material, and when her storyline takes a turn for the hokey later on, she cannot do anything to make it more palatable. The real standout performance, as it turns out, is the one delivered by Lily-Rose Depp, who nicely captures Kate’s ethereal qualities without going overboard. Now she might have helped to save the film, but her character ends up being shunted off-screen for long stretches of time in the second half and her absence is keenly felt during that time.

I have watched “Planetarium” twice now because I was curious to see if I might get more out of it with no expectations of all of its diverse pieces eventually coming together into a satisfying whole. As it turns out, I felt the same way about it the second time around as I did on my initial viewing. There are individual things scattered throughout that I liked—Depp’s performance, a lovely scene where the guests at a stuffy dinner party dash outside to frolic in a surprise snowfall, the amusing behind-the-scenes look at the French film industry at a time of flux—but they do not manage to compensate for a screenplay that never seems to have a clear idea of what it wants to say or how to say it. “Planetarium” was made by talented people and presumably with the best of intentions but other than serving as a showcase for Depp (who is even better in another French import called “The Dancer” that will hopefully be headed here soon), all that it really manages to do is to renew one’s appreciation for the comparable accomplishments of “Personal Shopper.” 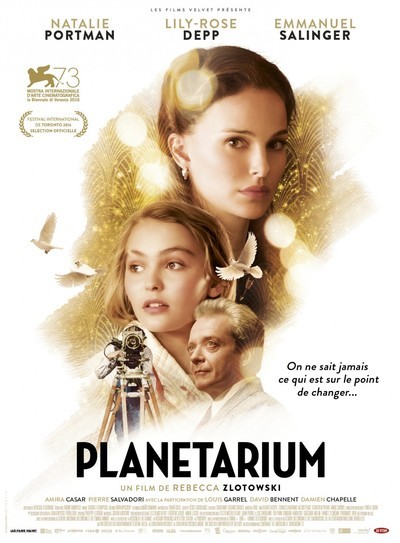