Roberto Saviano’s extensive reporting on Italian organized crime garnered him international acclaim and a charged reputation. His 2006 debut book “Gomorrah,” which chronicles Saviano’s investigation into the Camorra crime syndicate, was so successful that he eventually received credible death threats from various capos. Saviano’s exposé approached the Camorra like a virus, illustrating in evocative detail how this web of ruthless gangsters infects civilians from all walks of life. Naturally, the resident godfathers did not approve of this depiction, and Saviano has been living under police protection ever since.

Following its initial publication, “Gomorrah” has been adapted into a play, an acclaimed film, and, most recently, a popular Italian TV series. Saviano’s dramatic success has led to another adaptation: his first novel, “Piranhas,” about a young boy’s rise through the criminal ranks alongside his teenage gang. Directed by Claudio Giovannesi, and co-written by Saviano, “Piranhas” sports a streetwise familiarity with Neapolitan neighborhoods: we travel through the narrow, busy streets alongside the nascent hoodlums on their scooters, catching glimpses of life controlled by lower-m mafiosi. This childlike POV, from which we see almost everything, confirms that these characters aren’t larger-than-life Corleone-esque figures, but working class locals who happen to strike it rich through force. But it’s clear that any power remains permanently tenuous. It’s always under threat by a new enterprising group, even ones comprised of 15-year-olds whose moxie can’t afford them access to hot clubs.

“Piranhas” generally succeeds whenever it leans into its hangout vibe. The teenage gang isn’t particularly memorable (names and personalities are eschewed for rowdy homogeneity) but their collective energy can be fun to watch, especially because it allows Giovannesi to document youth as currently lived. Criminal aspirations asides, the kids remain kids—proficient with technology and social media, tapped into luxury brands just out of reach, and looking to impress their idols and objects of affection. When they finally start gaining notoriety with all of its material rewards, they don’t suddenly shake off their adolescence. Drugs, weapons, money, women are all shiny new toys, at least until the consequences of life-or-death choices come a-knocking. Giovannesi and Saviano mine the film’s best tension from the scenes when the gang first plays with guns. Their childlike glee from clumsily handling AK-47s is bound to make any parent wince.

However, those glimmers of personality and regional specificity are marginalized by a trite gangster saga with all of the familiar story beats. “Piranhas” courts comparisons from obvious totems like “Scarface” and “Goodfellas,” but that’s mostly because its subjects are fluent in those mob narratives. Instead, “Piranhas” merely goes through the motions of imitating its forbearers, hoping that it’ll get by coasting on youthful gloss and scenic location shoots. The film’s standard rise-and-fall-from-grace narrative provides even the most inattentive viewers with a roadmap of what to expect and clear indications of when it will occur. No character rises above archetype, only making the most minor, superficial impressions often in relation to whoever else is in the frame. At some point, “Piranhas” stops trying to be even mildly unique and starts sluggishly going through the motions. Even the “good times” sections aren’t even that fun.

These imperfections might have been softened if “Piranhas” featured a more compelling protagonist. Nicola, the underdog leader who quickly takes control of his neighborhood from veteran thugs, is likely stitched together from various real-life examples, but he never scans as a credible person. He’s more of a collection of attitudes than a full-fledged personality, which makes some sense for a teen mobster-in-the-making, but newcomer Francesco Di Napoli isn’t equipped to communicate the gap between his surface persona and the real kid underneath. Instead, Di Napoli puts on a blandly confident face and unsuccessfully tries to sell it as innate charisma, which, combined with the thinly written characterization, makes for a blank figure at the center of a coming-of-age gangster tale. There’s an absence where feeling should be, and it extends to just about every facet of “Piranhas.” 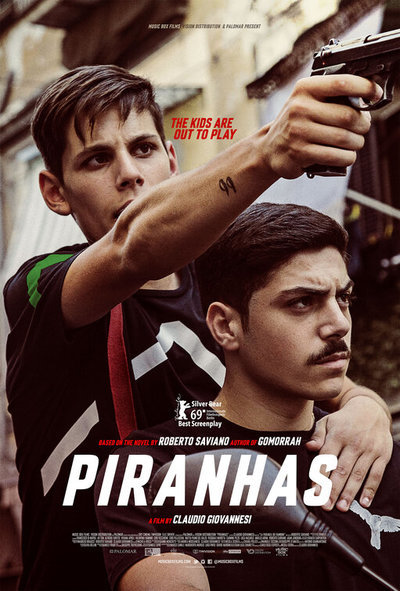