Pick of the Litter

Dogs are amazing. And when the subject of your documentary is a litter of five adorable puppies, you don’t really have to try that hard for an aww-inducing outcome. Yet with their fourth joint project “Pick of the Litter,” “Batkid Begins” co-directors Dana Nachman and Don Hardy Jr. make an honest effort to multiply the natural lovability of the Labrador siblings they follow from the moment they are born with all their furry, high-pitched innocence. Bred in California by the Guide Dogs for the Blind organization as candidates to assist visually impaired people, the unbearably cute puppies of the “P” litter (named Patriot, Phil, Potomac, Poppet and Primrose) embark on a multi-phased schooling to fulfill their purpose—an uplifting, sometimes bittersweet journey captured over a two-year period. You will certainly submit to the film’s disarmingly gush-out-loud moments and perhaps even embarrass yourself with a few involuntary squeaks (like a friend of mine, definitely not I, did), while also wondering: will all five of the pooches make the cut?

Not quite, and this is not a spoiler—statistics show that only 300 of the 800 trainees annually manage to go all the way in the program. It’s certainly not a bad ratio, which is both a testament to the selfless dogs’ eagerness to learn and please as well as the utmost dedication of a community of humans who lovingly set their four-legged buddies up for a win. Going against the commonly accepted canine training principles, success is defined by slightly different terms in this world. In the early moments of “Pick of the Litter” we quickly learn that basic obedience doesn’t necessarily translate into a desirable guide dog for the blind. These special animals need to exercise judgment to go against their humans’ wishes if they jeopardize their own safety at traffic intersections or other tricky spots. Through an opening montage, we hear testimonies of various blind people—including one who got out of the World Trade Center alive on 9/11 thanks to a brave dog—who were saved by exceptional canines that chose to disobey them at life-threatening situations.

So, who’s a good boy and who’s a good girl, exactly? Despite what the slightly mishandled title cards that bookend the film suggest—“only the best will make the cut”—they clearly all are, even when they lack the necessary qualities to pass their tests. In a very “Project Runway”-esque fashion, we say goodbye to the overenthusiastic good boy Potomac first. Since it is downright cruel to call any of these huggable babies a failure, their departure (to often become exceptional house pets or breeders) gets referred to as a “career change” instead. While Poppet and Phil proudly check off all the necessary boxes and get paired with their eventual humans in need of a guide, Primrose and Patriot follow different routes. The former becomes a breeder and the latter gets reunited with the kindly, PTSD-suffering Iraq veteran who helped raise him during the early stages of his training.

The emotional toll the training process takes on both the humans and the dogs is one area “Pick of the Litter” doesn’t explore deeply enough. During their two-year program, puppies rotate between a number of facilities and puppy raiser families out of necessity. We don’t really get to understand if frequent separation at such a young age emotionally impacts the canines in any way. As for the humans, we see an occasional tear and a silent sigh here and there, when the inevitable parting becomes a reality after months of emotional bonding. The loudest separation protest comes from one family, who complain about getting no notice before it was time for their foster to move on to a different spot. Amid all the dizzying sweetness, this memorable and tear-jerking moment hints at an issue of which Nachman and Hardy barely scratch the surface. Still, the puppies are beyond adorable and their snuggly nature can fill even the coldest of human hearts with warm and fuzzy feelings. With every wet face lick and happy tail wag, “Pick of the Litter” affirms the obvious: the world is a much better place with dogs in it. 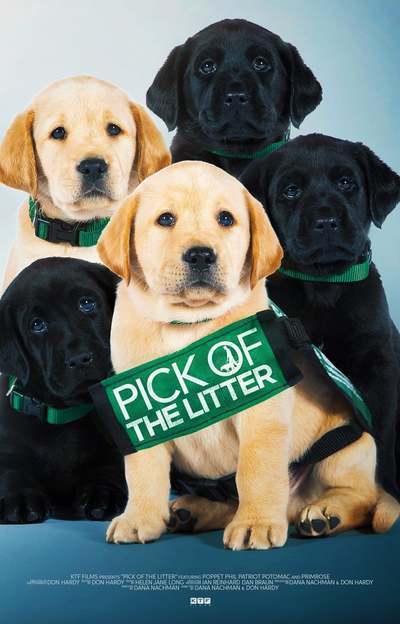