Two pictures are taken at the beginning of “Photograph,” a return to Mumbai for “The Lunchbox” writer/director Ritesh Batra, whose more recent films have included films based on English-language novels “The Sense of an Ending” and “Our Souls at Night.”

As “Photograph” begins, we see Rafi (Nawazuddin Siddiqui), who takes photos in front of Mumbai’s Gateway monument. He sells his services to tourists by promising that “years from now, when you look at the photograph you will feel the sun on your face, the wind on your hair, and you will hear those voices again.” If they do not have a picture, he tells them, “it will be all gone.”

Elsewhere in Mumbai, a man takes a picture with a phone. What he is looking at is fuzzy, but we will learn that it is a poster for a school, featuring his daughter, the star student Miloni (Sanya Malhotra). She is studying for an accounting degree.

Miloni and Rafi meet when she visits the Gateway and agrees to let him take her picture. She is called away by her family before he can put it in an envelope for her.

He hears (amusingly, over and over again from a whole series of people) that his grandmother has stopped taking her medicine until he makes some progress on getting married. So he impulsively sends her a photograph of Miloni as proof that he is seeing someone. Unfortunately, this is such exciting news that his grandmother (Farrukh Jaffar) decides to come see the girl for herself. He then has to try to find Miloni and persuade her to pretend to be the girl he told his grandmother he was dating.

At least that is what we infer. We never see that conversation. The charm of this film, which may take some getting used to for those accustomed to spell-it-out storytelling, is that it takes place in those quieter liminal moments, and it is just right for this story's delicacy. So are the exquisitely framed shots and the loving portrayal of the city of Mumbai.

Siddiqui and Malhotra are well suited to the gentle tone of the film, both quietly expressive in scenes where everything is conveyed through posture and eyes. There is a fairy tale quality to the story. In a city of more than 18 million people, Rafi is able to find Miloni (with some help from that billboard picture). Later in the film, he even gets some supernatural advice. Even Rafi’s crowded sleeping quarters are lit to seem almost magical.

After all, this is a movie set in the present day where an old-fashioned paper photograph, ejected while you wait from a portable printer, has enormous power. Miloni says that she saw someone who looks happier and prettier than she has ever been in her photograph. Can it be because that's how Rafi sees her? Or is it a glimpse of a life she never dared to imagine for herself?

We hear a casual reference at a family dinner to a time when Miloni wanted to be an actress, before her family pushed her to study accounting. As herself, she is so introverted and unsure that she cannot even tell Rafi or her mother what color she likes. But pretending to be the girl he wrote about, she can come up with a dramatic backstory for the character she is playing. And seeing herself differently, in the photograph and in the persona she creates for Rafi’s grandmother, inspires her to think about other lives and envision a different one for herself. She asks her family’s maid about life on a farm. She can tell Rafi about missing the cola she used to share with her grandfather. 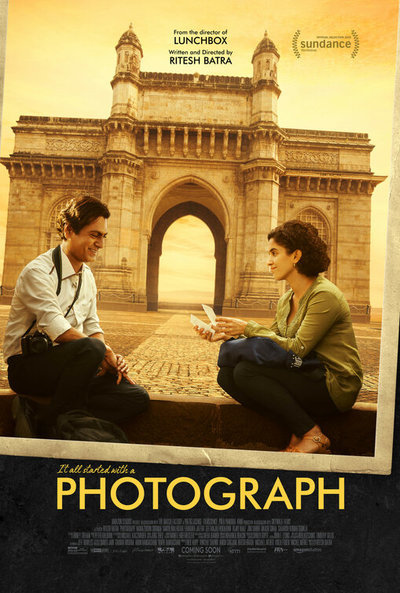