"Phoenix, Oregon," about a depressed middle-aged man who gets his groove back by helping revive a small-town bowling alley, feels like a relic from the pre-Internet, video store era, when putting enough recognizable faces on a VHS box could get a indie movie funded and seen. It’s hard to dislike, thanks to its sharp cast, but equally hard to love because it’s so uneventful and indifferently paced. This movie from writer/director Gary Lundgren doesn’t lack for positive vibes. It has a goofy grin on its face from frame one. But it never quite figures out how to pass its good vibrations to the audience.

James Le Gros, an American indie film veteran, gets a rare starring role here as Bobby, a sad-eyed, fiftyish cartoonist. He lives alone in a trailer and is still in mourning for his dead mom and busted-up marriage. He funnels his anger and regret into an autobiographical comic book while working as a bartender in a restaurant owned by a rich bully named Kyle (Diedrich Bader). The kitchen is overseen by Bobby’s old friend Carlos (Jesse Borrego), a visionary perfectionist who’s a bit like the fussbudget gourmet in the classic "Big Night."

The restaurant is tanking. Kyle has started buying the cheapest, lowest-quality food and drink and skimming the tip jar. A fight with Carlos over the purchase of inferior olive oil (“swill,” says Carlos) spurs them to go into business together and revive a long-closed bowling alley where Bobby once rolled a perfect game. A wine and liquor wholesaler named Tanya (Lisa Edelstein) who’s sweet on Bobby hooks them up with a venture capitalist (Reynaldo Gallegos’ Mario), and they're off.

Bobby and Tanya supply the leadership and logistical focus while Carlos supplies most of the vision. Aiming for a bourgie crowd that fetishizes hipster enthusiasm, the alley’s concession stand serves fancy cocktails, craft beer, and exactly four kinds of pizza, each offered in a 12-inch size with no substitutions allowed. (The latter is terrific detail, establishing Carlos as one of those stubborn aesthetes whose belief in himself inspires trust in others).

Unfortunately, "Phoenix, Oregon" is a film that’s more fun to describe than watch. Shot in wide-format images to no discernible purpose, it feels like a long pilot for an hour-long, laugh-track-free comedy-drama that a cable network shelved for lack of confidence. The performances are the main reason to see it. Edelstein has the rare gift of letting you see a character's thoughts while they ping through her head. Borrego has a Frank Capra hero's fizzy optimism: he makes Carlos as driven as a character can be without seeming unpleasant or unhinged.

Best in show goes to Le Gros, one of those sly character actors with leading-man good looks who is so comfortable in every part that it often takes you a second to realize you’re looking at the same guy you saw last month in something else. Bobby could easily have turned into a bland moper who sucks the oxygen from conversations. But Le Gros’ alert listening gives the hero enough of an interior life that the film’s already tediously expository voice-over seems even more redundant. Le Gros’ reactions to the other performers (many of them too strenously coded as fringe oddballs, such as Kevin Corrigan’s weirdly furious handyman and amateur bowler, who seems almost lethally resentful of Bobby) are so finely calibrated that the star's face tends to be more engaging than anything happening at a story level.

For all its warmth, this is a mostly inert film. Not much is at stake, and even the darkest moments don't seem to make much of a dent on anyone. Bobby begins the tale from a position of financial security, having inherited a nest egg from his mom that sat in savings for years, so as the story unfolds, you're essentially watching a guy prove that money actually can buy happiness, or at least catharsis. The renovation and launch hits a few snags, but nothing too dire. Characters speak passionately and at cross-purposes while debating the correct strategy, but rarely go so far over the line that bad mojo undermines the launch.

Lundgren periodically tries to inject deeper conflict and mild suspense (including some awkwardess between Bobby and Tanya over mixing business with pleasure, a climactic return by Bader's raging douchebag, and a subplot about a restaurant critic possibly showing up for on opening night, a la “Big Night” and “Waiting for Guffman”). But his heart doesn’t seem to be in it and the plot mechanics are perfunctory and unconvincing. The story eventually takes a turn that makes us think we're about to see the entire thing turn upside-down; but it’s too little, too late, and available evidence suggests the filmmaker wouldn’t have known how to handle the severe tonal shift that would have resulted if he’d decided to go down that road sooner.

It’s a shame, really, because in its more inspired moments (such as the long sequence where Bobby tries to match his record on the lanes) “Phoenix, Oregon” has a raggedy, upbeat energy. The “nothing happens” movie filled with fringe-y eccentrics is tough to pull off because it's so gossamer-delicate, but reigning masters of the form (like writer/directors Jim Jarmusch and Nicole Holofcener, who has cast Le Gros in the past) have a refined, assured aesthetic that wraps every project in a unifying hum. Lundgren hasn’t found his hum yet. 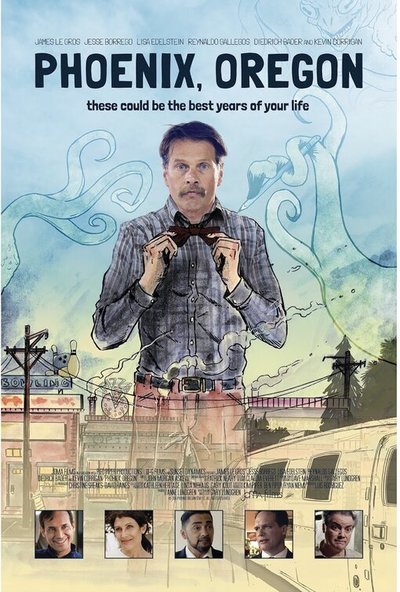