"Phata Poster Nikhla Hero" (translation, roughly: "the poster rips open and out comes the hero") makes its intent clear early on. After a brief prologue, the movie's hero, Vishwas Rao (Shahid Kapoor), is introduced jumping through a poster of himself to dispense a few quips and beat up some guys menacing an innocent girl. This kind of self-reflexive comedy pervades throughout, with star cameos and many references to other movies and stars. The result feels like a not-quite-as-good equivalent for action-comedy of what Farah Khan's 2007 instant classic "Om Shanti Om" was to the romantic melodrama—but to clarify, a movie can be not quite as good as something great and still be something very good. "Phata Poster Nikhla Hero" is very good.

In the lead role, Shahid Kapoor is charming, funny, a nimble dancer and action hero, and easy on the eyes. For a movie equally about actual heroism and the onscreen variety, it's essential that the lead be a legit movie star. Shahid Kapoor may have only had intermittent success thus far, but he's a joy to watch as Vishwas. His performance is perfectly calibrated, maintaining a level of silliness that makes an impression without wearing out its welcome over two-and-a-half hours. He's relentlessly likable, if that isn't too contradictory a phrase.

He isn't the only one, either. The movie's premise hinges on that most ancient of all comedy devices: mistaken identity. Vishwas has dreamed of being a movie star all his life, but his rigidly ethical mother (a delightful Padmini Kolhapure) insists that he become a police officer, and an honest one to boot. On a trip to Mumbai to secretly try to break into the movies, Vishwas finds himself mistaken for a policeman by the news media, the cops and the local criminal underworld. Hilarity predictably ensues.

It's nothing we haven't seen before—which is the whole point—and thus relies on its cast to bring life to the proceedings. They do not disappoint. Saurabh Shukla is hilarious as a gangster whose business is constantly disrupted by Vishwas's inadvertent crime-fighting frenzy (the ways in which he keeps stumbling onto and foiling crimes is itself very funny). Equally as good is Sanjay Mishra as a showbiz "guru" to impressionable young actors who ends up being both the cause and solution to a number of Vishwas's troubles. Ileana D'Cruz is quite good as the slightly unconventional heroine, Kajal. She and Vishwas fall in love because it's a movie and the male and female leads fall in love in a movie, but she isn't a helpless damsel waiting to be saved; in fact, her proactive nature drives the passive Vishwas for most of the movie.

"Phata Poster Nikhla Hero" is about four-fifths terrifically entertaining comedy with a brief—and, in retrospect, structurally necessary—turn for the serious shortly after the interval. In fairly short order, writer-director Rajkumar Santoshi makes clear that what appears to be first a lull and then a severe tonal misjudgment is, in fact, part of the film's larger celebration of cinematic artifice. In this case, it's the ability of filmmakers to manipulate audiences to a desired end. A skilled filmmaker (and Santoshi, despite an occasionally iffy resume as a director, is that) can have the audience noticing, thinking, and feeling exactly what that filmmaker wants.

If that seems a slightly lofty sentiment in consideration of what is, for the most part, a very silly comedy, it bears remembering that comedy, of all genres, requires the most active manipulation on the part of the writer(s) and director. Comic set pieces have to be very carefully crafted, jokes built, running gags paced for maximum effectiveness. The choreography of all these elements, not just the dancing (which is creatively staged, and exuberantly performed, particularly by Shahid Kapoor), but also comic set pieces and story, make "Phata Poster Nikhla Hero" enjoyable on meta-cinematic terms but also for the good clean (and notably so) fun of its comedy.

It's a rare film that's as fun to analyze as it is to sit back and enjoy. "Phata Poster Nikhla Hero" isn't quite that, as it's funnier than it is deep, but it's still an entertaining picture—and one that, a couple of violent moments aside, is suitable for the entire family. 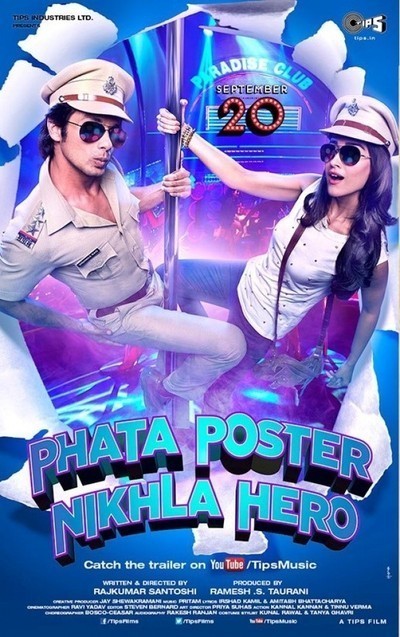