Pelé: Birth of a Legend

There is a lot of discourse these days about cultural “whitewashing,” a practice both vexing and widespread. It’s not just a matter of casting a non-Asian in an Asian role. It happens in ways that people are so used to that it might not occur to them, and for reasons that filmmakers will insist have to do with audiences’ actual preferences.

Let’s take this film, a well-meaning and sometimes interesting effort written and directed by brothers Jeff and Michael Zimbalist. It tells the story of the soccer player Edson Arantes de Nascimento, known worldwide by his nickname Pelé. The movie recounts his early life up until 1958, the crucial year in which the then-17-year-old helped clinch a World Cup victory against Sweden. The movie begins with an audio montage of plumy accents telling of the devotion of Brazilian soccer fans and the revolutionary impact of a not yet-adult player.

"Pelé: Birth of a Legend" flashes back to the very early childhood of said revolutionary player, and while its outline is true to Pelé’s true life—he did triumph over poverty to become one of the greatest talents and stars the world of sports has ever known—its specifics all fall into the land of cliché. Young Edson is mocked by rich kids, belongs to a mischievous little group of poor boys that comes complete with a jolly portly kid, the local adults are all transfixed by sports on the radio, a mentor advises the young wannabe soccer player that if “you want to play professionally, you can’t be ashamed of who you are.”

While all the persons of color in this film are played by persons of color, the movie whitewashes Brazil itself just by having all of its characters speak in English. The denial of language, to my mind, constitutes as much of a cultural betrayal as substitute casting. But even Pelé himself, who contributes a charming cameo in the film (and he looks great, too; you’d never guess that he’ll turn 76 this year) would likely tell you that in international productions that expect to make their money back in English-speaking countries, the mass audience won’t sit still for subtitles.

There’s also the movie’s soundtrack score, which seems desirous to give the impression that Jorge Ben Jor's 1976  “Ponta de Lança Africano (Umbabarauma)” was a musical point of reference back in 1952. Between the whitewashing factors and the very familiar narrative beats, there’s a lot of this movie that’s not much more than a tolerable drag. Things pick up when they get specific, that is, during the scenes in which Pelé’s exuberant, rhythmic, body-attack method of soccer play—a proud, African-derived style called “Ginga”—comes into conflict with the European-based formation style of play. “Ginga” is dismissed by old hands as “primitive,” and the gruff soccer coach Feola (played in typically dyspeptic mode by Vincent D’Onofrio, one of the few cast members to apply a kind of Brazilian lilt to his speech) strongly discourages his mixed-race team from using it. Until, that is, he witnesses the kind of results Pelé, who set a goal-scoring record in 1958 that holds to this day, is able to achieve with it. I would be happier with a documentary on Ginga narrated by the man himself. With subtitles, even. 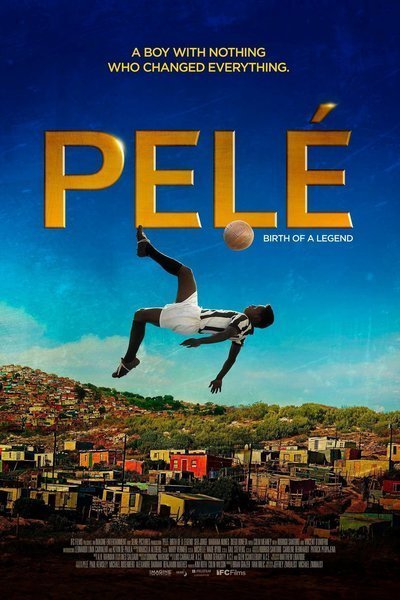 Rated PG for thematic elements, some smoking and language.