This week brings two films about rich people partying on Lawn Gyland. Both feature eccentrics, have surnames in the title, and mention polarizing directors in the commercials. The one that's not in 3-D, and has the better tan, is called "Peeples." Like its titular family, "Drumline" scribe Tina Gordon Chism's directorial debut lives in the shadow of its benefactor.

The commercials and subway posters feature producer Tyler Perry's name so prominently that, until two days ago, I thought the film was called "Tyler Perry Presents: Peeples." I don't mean to imply that Perry is some kind of Black Voldemort, but his name as a marketing device seems a disservice here. It immediately signals to much of the filmgoing public that "This film is NOT for YOU." "Peeples" shares Perry's penchant for gathering a great cast and mocking the "bougie," but that's where the similarities end. This is more "Meet the Parents" than "Madea Goes To Jail."

"Peeples" uses Jay Roach's Ben Stiller comedy as a jumping-off point. Wade (Craig Robinson) wants to marry Grace Peeples (Kerry Washington), but first he has to win over her impossible-to-impress daddy Virgil (David Alan Grier). Daddy works in the government (he's a federal judge) and thinks no suitor is good enough for his little girl. Wade's attempts to earn approval go spectacularly awry while Daddy scowls with intimidation. We are invited to laugh at poor Wade the way audiences laughed at poor Ben Stiller.

Where "Peeples" deviates from "Parents" is in its characterization of the clan Wade is trying to join. Rather than focus and toss scorn on Wade's mistakes, Chism widens the net to incriminate most of her cast. "Peeples" shares a similar "crazy relatives" comic vibe with the recent remake of "Death at a Funeral." With their myriad of secrets and idiosyncrasies, these Peeples turn out to be some messed up Little Fockers.

Egged on by his brother, Chris (Malcolm Barrett), who gasses him up with false confidence, Wade travels to Sag Harbor to crash the Peeples party Grace is attending. Grace's departure from NYC interferes with Wade's plans to propose, so he aims to kill two birds with one ring-mounted stone. He'll ask Grace's famous dad for his blessing and Grace for her hand. This will occur on "Moby Dick Day," which is as symbolic as "Peeples" gets. Familial approval is Wade's white whale, and like Captain Ahab, it literally drags him into the sea.

Wade is too good-hearted to harbor the suspicions he should have when Grace refuses to introduce him to her family. He is a musician and children's "counselor with a K" who sings "songs about urine to minors." That song opens "Peeples" and is genuinely funny. "Speak it, don't leak it," sings Wade in a gospel-infused paean to pee and honesty. It could serve as the Peeples clan's theme song; every one of them has serious skeletons in their closet. Wade's woman has enough skeletons to populate "Jason and the Argonauts." They start falling out as soon as Wade leaves the boat that takes him to the Peeples estate. Seems nobody in the family knows who he is.

Grace begrudgingly introduces Wade as "my friend … and we're in a relationship." The Peeples and Wade know equally little about each other, even though he and Grace have been seeing each other for a year. This causes Wade to bring inappropriate gifts and say inappropriate things. Adding insult to injury, Wade is mounted AND robbed by the family dog, leading to a financial mishap that colors Virgil's opinion of him. "I see Grace's men as her going through phases," Virgil later tells Wade. "You're her loser phase."

Wade's first sign of relief is the immediate bond he forms with Grace's younger brother, Simon (Tyler Williams from "Everybody Hates Chris"). Simon sees Wade's middle-class existence as a truer Blackness, though Simon turns that notion into Wade's biggest problem. Simon fancies himself a bling-infused thug rapper, but he's actually a brainiac nerd. Like Wade, he too has written a song that could serve as a theme for at least two of the other Peeples family members. It's called "Drawers on the Floor."

Wade also hits it off with Grace's CNN reporter sister, Gloria (Kali Hawk), holder of the worst-kept secret on Sag Harbor. Gloria's been showing up for the past nine years with her "best friend" and camerawoman, Meg (Kimrie Lewis-Davis). Meg and Wade share a kinship for honoring the truth over secrets and lies, but neither can get their respective mates to own up to anything that might dishonor Daddy Virgil.

Of course, Virgil's righteous demeanor hides his own huge secrets (see Simon's song title for a hint), which have driven his wife Daphne (S. Epatha Merkerson) to grow some suspicious "alternative medicine" mushrooms and herbs. These figure in the climactic "Moby Dick Day" scene in "Peeples," which is where Chism's screenplay fails her. Until this sequence, "Peeples" maintains a playful comic rhythm that eases us over its occasional bumps in the road. As a set piece, "Moby Dick Day" is protracted, forced, and features one scene of humiliation too many for Wade.

Chism's cast is game for her shenanigans, and the biggest pleasure of "Peeples" is watching them cut loose under her direction. This movie has one hell of a cast. Veterans Melvin van Peebles and Diahann Carroll play Grace's grandpa and nana, with van Peebles doing wonders with quiet body language alone. As Sweet Sweetback's Baadasssss Kid, Grier brings comic menace to Virgil. He inherits his fatherly toughness; a scene of both Grandpa and Virgil merely staring at Wade made me want more scenes of them together. For the Peeples, unrealistic expectation is an heirloom.

Robinson is a memorably charming comedic actor. It's nice to see him vacate his Apatow movie Sidekick Negro characters in favor of a lead role, which he handles successfully. Robinson wins us over with Wade's goofy, sweet outlook and demeanor. His musical numbers are high points, especially when he joins an effervescent, spectacular Merkerson on the nasty '70s-era one-hit wonder Daphne sang in her days as a former music star. Known more for her dramatic chops, Merkerson walks off with "Peeples." She mines her character's serious problems and emerges with comic gold.

Kerry Washington has the hardest role to play in "Peeples," and while her performance is fine, I found myself disliking Grace intensely. Grace's refusal to defend Wade, even in the face of a character-destroying theft charge, got under my skin. I kept thinking Wade could do better, though after seeing Washington in a prep-school girl outfit, I understand why he'd stay by her side after the hell her family puts him through. Chism's decision to make Grace this flawed is bold, but it throws the film slightly off-kilter.

The sign of a good comedy is whether you laugh. Coupled with my enjoyment of the performances, I laughed enough to give "Peeples" three stars. I suspect enough of my peoples will come out to this "Gatsby" counter-programmer to spawn a few sequels. I'm putting my bid in for the titles "Peeples Who Need Peeples" and "Yarbrough and Peeples." If you know who "Yarbrough and Peoples" is, this is probably a movie for you. 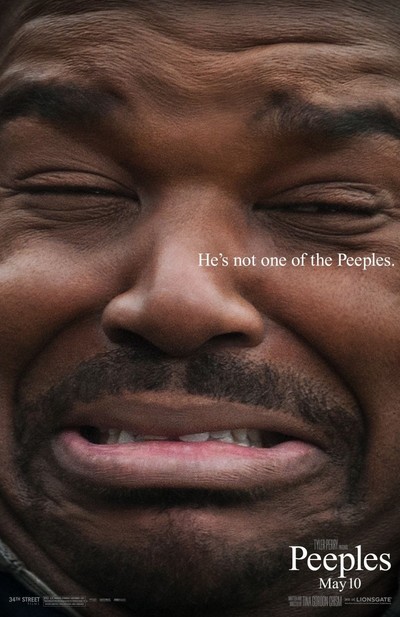