"Peace Officer" is a nearly great documentary about a national crisis, but its heart is a tragedy with a sickening ironic twist. The protagonist, retired law enforcement officer Williams "Dub" Lawrence, became the youngest sheriff ever elected in his hometown of Centerville, Utah, and started the city's first Special Weapons and Tactical unit, or SWAT team; thirty-three years later, that SWAT team would shoot his son-in-law to death after a domestic disturbance call.

Lawrence has spent the last six years investigating the incident and others like it. In the process, he has come to the conclusion that not only was his son-in-law's death preventable, it was inevitable considering the culture of SWAT teams and mentality of law enforcement bureaus that feel naked without them. The relationship between police and  citizens has been severed. Law enforcement agencies invest in automatic weapons, rocket launchers, armored vehicles, grenades, tear gas and other signifiers of a military mentality that views civilians—the very people that police are sworn to protect—as The Enemy. "Peace Officer" is a simple, provocative and correct title for this movie. It's is about a particular peace officer, Lawrence, a soft-spoken man whose wide grin and affable manner mask deep reserves of melancholy and righteous anger. But it is also about the idea (outmoded these days, unfortunately) that the main job of police should be to keep the peace: to preserve and protect and defend, not attack and destroy and dominate and terrorize.

Lawrence's odyssey began in 2008, when his son-in-law, a likable but also brooding and recessive man, snapped during an argument, struck his wife, then went out into his pickup truck with a pistol and sat there pointing the weapon at himself. The house was swarmed by tactical officers from all over the county looking for a piece of the action. What happened next was in dispute until Lawrence clarified things after-the-fact. The official version of events said that Lawrence's son-in-law was shot dead after an hours-long standoff with police (an initial police report erroneously claimed he killed himself). What actually happened was that dozens of tactical officers in riot gear took over the neighborhood like an occupying army, driving armored trucks up onto lawns, putting sniper units all over the neighborhood, and even sending a team to break into the house next door, smashing windows and ripping out screens to get a better shot at the suicidal man.

Lawrence rushed to the scene as soon as he heard what was happening, and afterward, his instincts kicked in and he began conducting his own investigation, collecting shell casings and evidence of gas and chemical sprays and "flash-bang" grenades that official investigators had missed, and putting them in sealed evidence bags. One hundred and eleven shots were fired in total. Lawrence contends that his son-in-law did not have to die—that the situation was exacerbated and escalated by the John Wayne mentality of police tactical units. They started out in the late 1960s in response to urban riots and hostage situations, were co-opted into faceless, black-clad, military-styled strike teams during the 1980s War on Drugs, and now seem to have their own identity and agenda.

Lawrence stores evidence on this case and others in an airplane hangar. The place is an extraordinary sight;  a gallery of misconduct, with photos and documents lining every available wall. Lawrence has become an advocate of deescalating police tactics and ending the stateside arms race. Too many people are dying for no good reason, he believes. The SWAT culture has become rotten and frightening, a greater threat to democracy than the crises it was invented to address.

This film by Brad Barber and Scott Christopherson—a debut feature, remarkably—combines the best elements of old school and new school nonfiction filmmaking. On the old-school end, you have a series of character portraits that are perceptive and empathetic without seeming to shade the truth or tip over into special pleading, and stories of SWAT team brutality and arrogance that strengthen Lawrence's assertions. (Among the most appalling of these is another Utah incident where SWAT officers broke into the wrong house on Christmas Eve due to a paperwork error, terrified a family of three, then exited, not with an apology, but by telling the terrified father, who naturally had assumed the cops were home invaders, that if he'd had a gun instead of a bat, "you'd be dead.") New school elements include the alternately mournful and ominous score (by Michah Dahl Anderson), the strikingly composed inserts of evidence (an Errol Morris touch), and extensive footage taken from police videos (which allows for a clinical study of what went wrong, as well for as an intensely cinematic recreation of horrifying moments.) This is one of the year's best films. 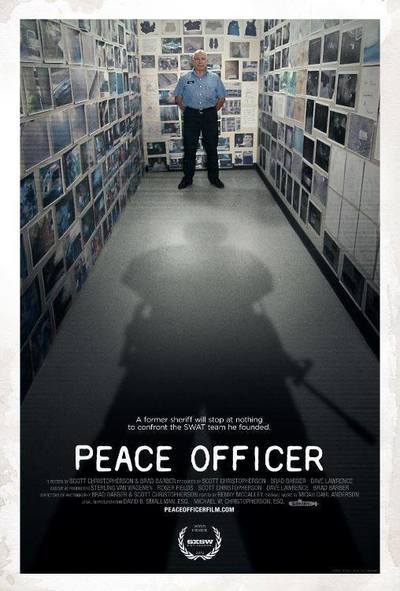