Although Edward Zwick's "Pawn Sacrifice" has the great virtue of centering on expert performances by a cast including Tobey Maguire, Liev Schreiber and Peter Sarsgaard, it ends up as a sad example of the inherent difficulties of dramatizing a cerebral face-off like the 1972 battle royale between chess masters Bobby Fischer and Boris Spassky.

No doubt the subject here could make for a strong film. It certainly did in "Bobby Fischer Against the World," Liz Garbus' justly acclaimed 2011 nonfiction account of the same material. The latest proof that some real-life incidents come across more dramatically when treated as documentaries rather than fact-based fiction, Zwick's film effectively poses the question of why viewers should care about a chess match that riveted the world more than 40 years ago.

The answer to that may well depend on the viewer's age. Zwick includes generous dollops from the U.S. network news coverage of the Fischer-Spassky confrontation in Reykjavik, Iceland, footage that will perhaps carry a nostalgic charge for baby boomers who recall how the match was treated not just as a sports event but as a symbolic showdown between the ideologies represented by the U.S. and the Soviet Union. For filmgoers too young to remember the fraught tensions of the Cold War, however, these same antique newsreels may seem like little more than dimensionless historical curiosities.

In rather formulaic fashion, Steven Knight's screenplay starts off with certain tense moments before the big game begins, then flashes back to show how the characters got there. The result is that the film's first hour is devoted to a biopic-style chronicle of Fischer's early life, in which we learn that Bobby (played as a youngster by Aiden Lovekamp and Seamus Davey-Fitzpatrick) had a loose-cannon Communist mom (Robin Weigert) who refused to tell him who his real dad was, but established his chess skills early under the tutelage of a generous mentor named Carmine Nigro (Conrad Pla).

One of the jarring oddities of this section of the film is that it's supposed to take place in New York, but when we see an al fresco chess rendezvous that's labeled "Washington Square Park," it is transparently NOT that world-famous location. Sure, we know that budgetary constraints oblige many U.S.-set films to shoot in Canada, but then why not leave out the label and allow viewers to assume that this is some other park? In any case, Montreal here plays not only New York but, even more improbably, Santa Monica.

The latter city is where Fischer (now played by Maguire) has his first battle with Russian chess ace Spassky (Schreiber). Prior to this, we've seen how the brash young prodigy has already emerged as a media celebrity and forged a precocious career path with the help of lawyer Paul Marshall (Michael Stuhlbarg) and Catholic priest William Lombardy (Sarsgaard), a chess master who served as his teacher.

As he does throughout, Zwick treats Fischer's late-60s trip to California with all manner of cinematic clichés: We see oodles of grainy footage of surfers and their chicks on the beach and other flashes of the sun 'n' fun lifestyle, not that this has anything to do with the chess competition that takes place entirely indoors. Most annoyingly, the filmmakers lamely try to conjure the era by repeatedly blasting period rock 'n' roll hits on the soundtrack. Even fans of this music are likely to concur that it has been used for such purposes far too often in movies.

In any case, gobs of musical pep do nothing to make the slow and arcane processes of chess more accessible. Rather oddly, Zwick doesn't even show the Santa Monica match between Fischer and Spassky. We simply see the result, which has the feel of dramatic contrivance: Fischer, the loser, screams inchoately as his puzzled nemesis emerges from an early morning swim in the ocean.

Once the scene switches to Iceland in the film's second hour, we've clearly gotten the message that Fischer is a nut job. But filmgoers are likely to consider this a blessing since it accounts for much of what entertainment value the climactic match holds. Even if we don't care that Richard Nixon and Henry Kissinger are watching in the White House (among countless nudges we're given as to the event's geopolitical significance), and despite the unavoidably truncated and opaque way the games are presented, there's some amusement in seeing Fischer insisting that the play be moved to a small rec room away from the big hall's noises and distractions, a bit of craziness that eventually unhinges the favored Spassky.

By this time in his life, Fischer (who was Jewish) was already into the anti-Semitic conspiracy theories that marred his public persona long after his days in the sports limelight had waned. While Zwick and company do nothing to explain this bizarre mania, "Pawn Sacrifice" definitely conjures the feeling of it, thanks in large part to the movie's greatest asset: Maguire's edgy, charismatic performance. 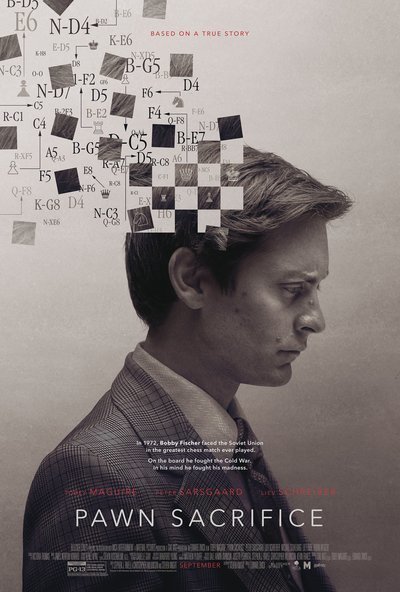