Director and writer Leena Yadav set “Parched“ in a slightly fictionalized world: the characters live in a dusty invented rural village called Ujhaas, modeled on similar villages in northwestern India, and they speak an invented dialect. But the rest of the details—the forced child marriages, the financial difficulties, the spousal and familial rape, the physically and emotionally abusive alcoholic husbands—are all drawn from stories that Yadav heard from women in those villages while traveling to find a story. “Parched” is a filmmaker’s attempt to understand how and why these women continue to live.

At 32, Rani (Tannishtha Chatterjee) has been a widow for half her life, and is mortgaging her future to pay for a dowry and wedding so her son, Gulab (Riddhi Sen), can have a beautiful wife: Janaki (Lehar Khan), a young girl from a neighboring village. Gulab is busy falling in with the wrong crowd, a group of young men in the village who fear the changes in the village's women that will come with progress—like education and access to resources—but are mostly interested in whores, booze, and growing into the shoes their fathers left behind. Rani's best friend is Lajjo (Radhika Apte), who desperately wishes for a child but can't conceive and is battered nightly by her alcoholic husband Manoj (Mahesh Balraj). Lajjo is also a skilled seamstress, and she and Rani, along with other women, work for a local entrepreneur Kishan (Sumeet Vyas) and are saving for the village to finally get a satellite and television—their first real connection to the outside world. The two women are friends with Bijli (Surveen Chawla, in a particularly strong performance), a dancer in a touring troupe who performs erotic dances nightly to cheering crowds of men, and also entertains clients made weak by desire.

The women live in a tightly controlled world, hemmed in by tradition, but in their private spaces they talk about love, sex and their dreams for the future. Life seems like an unending cycle of hardship punctuated by small bits of happiness. But it all breaks down. On the day of her son's marriage, Rani discovers that Janaki's hair has been cut off, dishonoring her in her village. Manoj's brutality towards Lajjo grows more fierce. Bijli finds out a new girl might replace her.

To tell such extreme stories is tricky, and sometimes “Parched”—which is ultimately a stirring melodrama—falls on the side of caricature with its male characters. Every man is a villain, from the elders who scoff at the idea of women having any success all the way down to the young boys. Only one, Kishan, seems even human by the film's end, and even he is underdeveloped. The cruelty goes on unabated. And yet—who knows? Abusive monsters exist everywhere; being raised a culture deeply steeped in misogyny makes those behaviors acceptable, even marks of masculinity. Still, one has to wonder if no good man can be found.

But that doesn't matter all that much, because the women of “Parched,” especially the three at its center, are wonderfully complex: Rani is fully aware of her dark early days as a young wife, during which she was mistreated by both her new husband and her mother-in-law, but reflexively treats Janaki with disdain and even abuse; Lajjo chafes under her husband's tyranny, but still lives for his approval; Bijli seems breezily liberated, but can't come up with a way to free herself that doesn't require a man. These women are thirsty for everything: for passion, for love, for sex, for freedom. These conflicts keep the film consistently surprising, and—as shot by Russell Carpenter ("Titanic")—”Parched” is vibrantly alive, full of color and light and movement and music. There is sex in this movie, and there is dancing, and there are vibrant fabrics and foods and fire. It's a dry place, but one ringed with beauty.

That Yadav chose to make "Parched" in response to these stories shows how honestly she wanted to understand their actions, unfathomable to many Western minds. And it seems that in drawing Rani, Lajjo, and Bijli as smart, articulate, skillful, successful, and sexy women, she succeeds. A viewer can fume and shake her head, but at the day’s end, the empathy demanded by a camera trained on a a woman not totally unlike yourself helps you see her as more than just a victim of tradition and misplaced machismo. She is a person with dignity, and she demands to be treated as such—even by the Western audience member.

Interestingly, the film's final scenes are set against the backdrop of a festival, celebrating the day on which a lord and a goddess defeated the forces of evil and lies, replacing them with truth. The celebrations—which involve burning a representation of the villains in effigy—are intercut with scenes of radical liberation for Rani, Lajjo, and Bijli. Even Yadav, in trying to understand the women who live these lives with seeming willing resignation to their fate, couldn't fathom the idea of leaving them in that world. She sets them free. Whether that's a failure of imagination on her part or a success depends on your point of view. 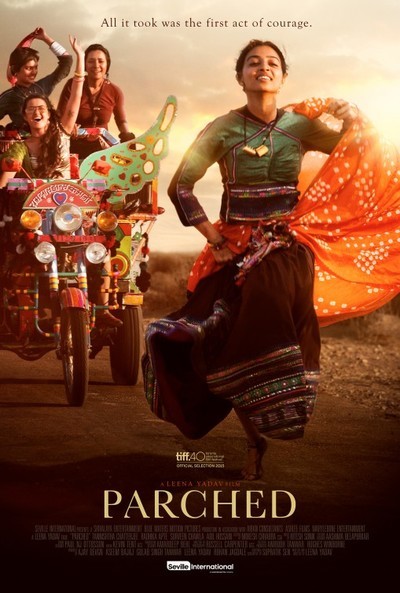