The last time that Harrison Ford and Gary Oldman shared the screen together, the former was politely but firmly imploring the latter to get off of his plane in the somber 1997 docudrama "Air Force One." Now, after all these years, the two have reunited for the slightly less plausible "Paranoia" and once again find themselves going down in flames, this time inadvertently. Here is a film that clearly wants to be a gripping techno-thriller but feels as if it was designed both by and for people who still have not quite figured out how to get their Kindles to work.

Our hero, for lack of a more accurate or printable term, is Adam Cassidy (Liam Hemsworth), a poor-but-hunky low-level employee of WyattCorp, a multinational tech firm run by the all-powerful Nicolas Wyatt (Oldman). One day, Adam goes before the boss with his development team for a pitch meeting and whiffs things so spectacularly that he gets the entire group terminated right then and there. Although it has been previously established that WyattCorp is ruthless and greedy enough to reduce Adam's company insurance at just the precise moment that his sickly dad (Richard Dreyfuss) lands in the hospital, they inexplicably leave the group's corporate credit card up and running long enough for him to lead the gang out for an insanely expensive night on the town and himself into the bed of comely go-getter Emma Jennings (Amber Heard).

The next day, Adam is called back before Wyatt but instead of having him arrested or pulped, his former boss makes him an offer that he cannot refuse—be groomed into the perfect candidate for a top-level job at the rival tech firm run by Wyatt's one-time mentor and current rival Jack Goddard (Ford) and use his access to purloin the details of a top-secret project. With the aid of a "Pygmalion"-style grooming overseen by Dr. Judith Bolton (Embeth Davidtz) and the muscle provided by Wyatt's chief goon (Julian McMahon), Adam worms his way into the company and Goddard's good graces—not to mention Emma, who just happens to work there as well—and everything seems to be going swimmingly, but once the FBI begins sniffing around, it gradually begins to dawn on him that he is now caught in a web of lies and deceit and must use his wits to play his oppressors off of each other in an effort to survive.

You will notice that I did not mention "paranoia" in that web and that is because this is one of the least paranoid paranoid thrillers that you will ever experience. Some might argue that this is what you get when you put potentially suspenseful material in the hands of a filmmaker like Robert Luketic, a director whose oeuvre includes "Legally Blonde," "Win a Date with Tad Hamilton" and two lesser Katherine Heigl vehicles ("The Ugly Truth" and "Killers"). Then again, not even the likes of Hitchcock himself could have done much with the material supplied here by screenwriters Jason Dean Hall and Barry Levy, working from the novel by Joseph Finder.

The story is implausible in ways both big (why would Wyatt entrust this top-secret plan to a self-centered hothead like Adam?) and small (unless the film is set in a world in which "A View to a Kill" really happened, why are all the big tech firms suddenly located in mid-town Manhattan?) and asks viewers to care about one selfish jerk trying to worm his way out of being the pawn of two other selfish jerks. For his part, Luketic tries to mask the narrative shortcomings with a lazily flashy visual style and a staggeringly irritating score that uses cell phone sounds as a recurring motif. Sadly, the rest of the film is so draggy that I kept wanting to pick up and see if there was something more interesting on the other end.

Hemsworth and Heard are both impossibly attractive but generate zero sparks between them, though they are admittedly hampered by a screenplay in which the unvarnished techno-jargon they exchange in one scene is the closest that it ever gets to convincing flirtatious banter. As for their veteran counterparts, they, lacking anything compelling to work with, fall back to their respective default modes of late—Oldman chews the scenery with the kind of over-scaled hamminess that pays fewer dividends this time around than usual while Ford tries his best to fade into the woodwork, no doubt embarrassed over having somehow managed to find a technology-based project to appear in that is even more idiotic than the long-forgotten "Firewall."

Although presumably meant to be a modern-day version of the classic conspiracy thriller "The Conversation," "Paranoia" is so vapid that it plays like "Antitrust" sans the food allergies. The sad thing about it is that it takes a perfectly nifty title—the kind that might have found a proper home in the filmography of the likes of Brian De Palma or Dario Argento—and absolutely squanders it on a project undeserving of it while ensuring that no one else will be able to make proper use of it for a long time unless they make a clever adjustment or two. Now if you will excuse me, I am off the register the title "Lee Daniels' Paranoia" just to be on the safe side, an experience sure to be more gripping than anything to be found here. 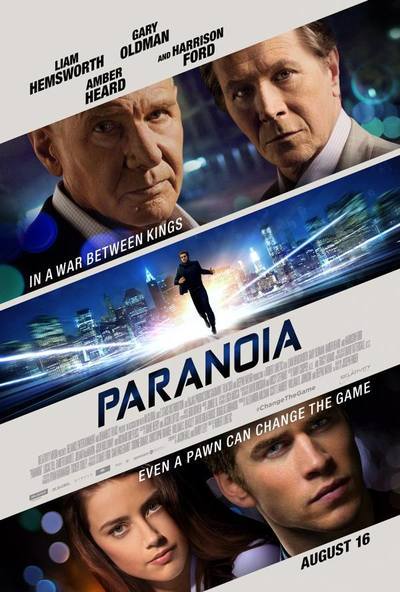