Oh no, Hollywood did it again. John Butler’s grating “Papi Chulo” manages to out-“Green Book” the Best Picture-winner when it comes to teeth-gnashing racial dynamics and ham-fisted sentimentality, its story built around a white person’s epiphany about those who look different than him. In the case of "Papi Chulo," this one is about a depressed, upper middle-class white man named Sean, who meets an immigrant worker named Ernesto outside a hardware store, and pays Ernesto to spend time with him.

Written and directed by John Butler, the story comes with an undeveloped dark side—we’re introduced to Matt Bomer’s weatherman Sean as he fails to hold it together on camera, having a live meltdown. The incident causes him to leave the job for a while, and we find out that it’s related to sadness for a past partner named Carlos, who left behind only a tree on the back deck. When Sean has it removed, a big sunspot is revealed underneath, and Sean has to go and get paint, but he doesn’t want to do the painting himself. In a tone-deaf meet-cute, Sean goes to the hardware store and meets his new pal Ernesto outside (Alejandro Patiño) while other migrant workers surround Sean's car. It’s only a semblance of trust in humanity that makes one think "Papi Chulo" agrees with you as to how gross all of this looks.

“Papi Chulo” is a buddy comedy, but only by its ramshackle design—it’s a forced friendship, and it’s not cute, let alone funny. As the needy Sean takes his new companion Ernesto through recognizable landmarks like Echo Park, Sean talks at Ernesto about his problems, treating him like the therapist he should have seen long ago. Ernesto can share how many children he has, because Sean knows some numbers in Spanish, but that’s pretty much it. Ernesto just sits there, half-smiles, and Sean rambles on. It's a bonding activity, Sean thinks, even though Ernesto knows he is getting paid for this diversion from painting the deck. Sean is even defensive in an earlier scene when someone remarks that they have “a ‘Driving Miss Daisy’ thing” going on after Ernesto rows a sleepy Sean around Echo Park. But Sean doesn’t fully grasp the situation or its optics, and frustratingly, neither does "Papi Chulo."

Sean is a bad friend, in fact. And he’s wrong about this friendship in so many ways—the viewer knows this, but we’re not sure the script does until the very end—and it's disheartening to watch, scene by scene. "Papi Chulo" gets even more ridiculous when Sean later tries to track down Ernesto, and it's simply obnoxious that he considers Ernesto enough of a friend to constantly talk at him about his problems, but not enough to have his cell phone number, and also that Sean treats the outside of the hardware store as if it were Ernesto’s home. The more that “Papi Chulo” tries to frame the friendship as quirky and not clearly one-sided, it gets even worse.

This is largely Bomer’s show, but it’s not a good showcase for his dramatic and comedic chops. He just shows how strained the comedy is, like with a bit built around him struggling with a seatbelt lock, or an inserted gag where a solo Sean recreates his hang outs with Ernesto, but now talking to himself. Even with the loneliness and depression at the core of the story, Sean doesn’t come off as tragically delusional so much as nauseatingly ditzy. Sean has a privilege that manifests itself in selfish actions—to use Ernesto for social time, or to use Ernesto to look like Sean is seeing someone, and it’s the worst joke “Papi Chulo” has.

Hope is slowly lost when it comes to the wish of Ernesto feeling more than just a flat surface to project onto. When it looks like Ernesto will get a moment of personality, talking to Sean’s friends at a party, Butler only lets us see these interactions as piano score takes over the mix. Butler does cut away from Sean’s main perspective in one instance for a joke—to see Ernesto joke with his wife after attending the party—but there's no time allotted for Patiño's performance to have a life of its own. It all makes one even more dismayed as to what purpose Ernesto serves for the bigger picture.

The backdrop for all of this is a picturesque, sun-kissed Los Angeles, and Sean is made out to be a stereotypical resident—a wheatgrass shot-taking, Runyon Canyon-hiking, pseudo-celebrity in an environment that influences what movies get made and what don’t. Especially with his lack of self-awareness, Sean is essentially a parody run amok, and "Papi Chulo" could have been a much sharper commentary on how the real-life people who think like him are extremely misguided. But “Papi Chulo” doesn’t distance itself from his ignorance, so much as embrace it. 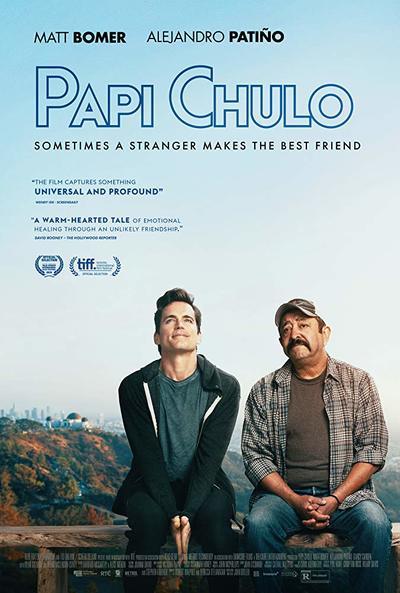