"Palm Springs," directed by Max Barbakow (his feature film debut), is a very interesting and thought-provoking experience. It often made me laugh out loud. The cast—Andy Samberg, Cristin Milioti, J.K. Simmons, Peter Gallagher, Meredith Hagner—is so talented, so in the zone with the material that they crackle with unexpected character development, absurdity, flaws, humor. With all the humor, though, the film strikes an unexpectedly tender almost bittersweet chord, the humor shadowed by sorrow, loneliness, helplessness. "Palm Springs" works by stealth; it doesn't announce its tone in broad strokes. There's sleight of hand: judging from the opening sequence, when a bunch of people gather in Palm Springs for a wedding, you think this might be your run-of-the-mill party-out-of-town kooky-family-ensemble film. But "Palm Springs" is full of surprises.

At the wedding, Nyles (Samberg) and his much younger girlfriend Misty (Hagner) hang out in the hotel room, and something is really off about Nyles from the start. He and Misty try to have sex, but he's bored out of his mind. He attends the wedding wearing a Hawaiian shirt, drinking cans of beer during the ceremony. He seems like a typical manboy, "acting out" under the influence of alcohol. Sarah (Milioti, excellent, vulnerable and guarded by turns) is the gloomy maid of honor, who knows her family considers her "a liability who drinks and fucks around too much." After all, her younger sister is so selfless she donated bone marrow for someone who needed it. How can a big sister compete with that? Nyles hits on Sarah, even though he's dating Misty, and the two stumble into the desert for impromptu sex on the boulders. And then ... things take a wild turn. It's revealed that Nyles is stuck in some kind of time loop, where he re-lives the same day over and over again, a la "Groundhog Day" (the lack of any verbal reference to "Groundhog Day" stands out. "Groundhog Day" and its concept is so well-known that if anyone actually got stuck in a loop in real life, they probably would say, "Wait a minute, am I in 'Groundhog Day' right now?")

How the time loop operates is revealed slowly. Nyles has tried to kill himself repeatedly. No luck. He sleeps with everyone at the wedding on different occasions, including one of the groomsmen, just to get a little variety. It doesn't matter. He still wakes up in the same hotel room with Misty nagging him to get dressed. By the time Sarah enters the loop, Nyles has reached a carefree zone with his predicament. Life is now meaningless to him. Time is meaningless. He cannot change his destiny. The only thing to do is entertain himself by making huge drunken scenes at the wedding, just to see the shocked reactions. Sarah's response to being sucked into the loop, however, is not passive. She says to Nyles, "I don't want tomorrow to be today. I want tomorrow to be tomorrow."

How this all plays out is one of the movie's special pleasures. Time loop stories have been told in endless variations. There's "Groundhog Day," of course. There's also the recent Netflix series "Russian Doll." "Edge of Tomorrow" is an extremely entertaining version of two characters stuck in a loop, adjusting their behavior as they make the same mistakes over and over again, trying to get things right. In the long-running CW series "Supernatural" (which I wrote about here in March), one of the episodes most beloved by fans is "Mystery Spot," "Groundhog Day"-inspired. "Palm Springs" doesn't so much borrow from these as careens off on its own track. You may think you know where it's going, but Barbakow and screenwriter Andy Siara keep it fresh, developing ideas in a constant state of flux.

J.K. Simmons' role is difficult to talk about without spoilers, but he is one of the many "wrenches" thrown into what could have been a predictable story. Dale Dickey shows up as a biker chick in a bar, proving she is one of the most reliable and versatile character actresses in the business. The relationship between Nyles and Sarah develops in fits and starts. What started as a casual hook-up to escape their miserable lives, is forced into a sometimes-adversarial sometimes-close relationship. Feelings bubble up, but instead of being a welcome escape, they both are filled with melancholy and anxiety. Is it even worth it to get to know each other in this weirdo reality? Would this "thing" they have even exist back in the real world? In his script, Siara makes sure that both Nyles and Sarah get to be complex. They are both intelligent, flawed, lying to themselves, afraid of intense feeling. Their slow approach into something deeper unfolds in what can only be called an organic way.

Samberg and Milioti deserve a lot of credit for this. The "trope" of two people who seemingly despise each other before magically falling in love has a long history. Consider Rosalind Russell and Cary Grant flinging vicious verbal barbs at one another in "His Girl Friday," all while being sucked into each others' orbit. The question is: "Who else could put up with either one of these people? They're perfect for each other." Falling in love is not what either Nyles or Sarah expected in their lives. After all, back in the real world, Nyles chose Misty, by all appearances a nightmare (Hagner is hilarious), and Sarah spends her time self-medicating and covering up her self-pity with a jaded exterior.

"Palm Springs" is genuinely romantic, in a way that (sadly) feels old-fashioned (but isn't). People get bruised by past experiences in love, they barricade themselves off from hurt. This becomes a habit, and the habit then becomes your personality. "Wait until the right person comes along" assumes that people stay as open and vulnerable as they were when they were young. But when you've been knocked around by life, love is not necessarily a 100% positive experience. Love comes with other painful things attached: regret, fear, mistrust. "Palm Springs" explores it all. 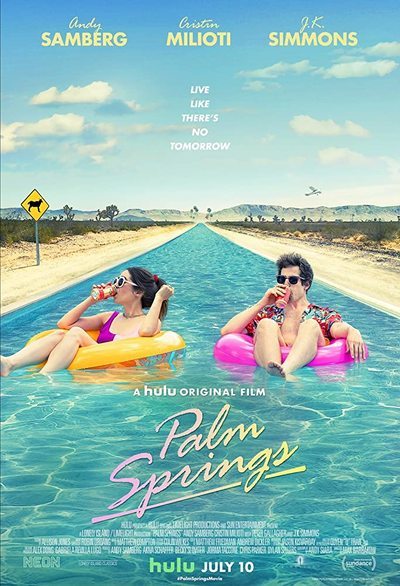 Rated R for sexual content, language throughout, drug use and some violence.