Alexandre Aja makes a very different kind of confined spaces thriller to follow up his great “Crawl” in this week’s also-great “Oxygen,” premiering today on Netflix. It may have been in development before the world knew anything about COVID-19 (and once had Anne Hathaway attached), but this truly feels like the most 'pandemic thriller' yet in its own unpredictable way. It’s a film about isolation, loss, and an uncertain future. Shot in July 2020, it clearly reflects all of the international concerns about diminishing oxygen intakes even as it unfolds in a manner that seems unimaginable. Most of all, it features a stunning performance from the great Mélanie Laurent (“Inglourious Basterds”), who owns the screen as the film’s only real character. With robust direction in an incredibly confined space and Laurent’s phenomenal work, “Oxygen” should feel like a breath of fresh air for people looking for something to watch on Netflix. (Sorry.)

Laurent plays Liz Hansen, a doctor who wakes up in a cryogenic chamber with no memory of how she got there. In fact, her memories seem jumbled and inconsistent altogether, adding to her confusion. At first, she’s not even sure of her own name, or her professional or personal background. As these memories start to filter in, she communicates with an on-board computer named MILO (voiced by Mathieu Amalric), who sometimes sounds only slightly less nefarious than HAL when it comes to projections regarding Hansen’s odds of survival. You see, the chamber is losing oxygen fast. Liz has to figure out who she is, why she’s there, and how to fix her nightmare situation. It’s not unlike “Buried” meets “2001: Space Odyssey,” which is a hell of an elevator pitch.

The first half-hour of “Oxygen” is its most effective as the film unfolds like a mystery wherein a victim has to ask the right questions to figure out how to save her life. She has a supercomputer at her disposal in MILO but it’s a system that only responds—it doesn’t think for itself. She can’t just tell MILO to figure shit out. She has to ask the right questions to get the truth of why she’s there and how she can escape. Why has no one responded to MILO’s distress signal? Why do calls to home and authorities seem to be getting her nowhere? Why can’t she even remember her own past other than in fleeting images? One of the fun things about “Oxygen” is that there are concrete answers to all of these questions by the time the movie is over. Unlike some recent high-concept sci-fi, the pieces fit in “Oxygen.” It might be neat to rewatch the film after all of its secrets have been revealed, but it’s that first view wherein we know only as much as Liz knows that’s so riveting.

Naturally, given the entire film (other than glimpses of flashbacks or memories) takes place in the chamber, Aja asks a lot of Laurent. She delivers and then some. Running an entire gamut of emotions from fear to anger to grief, Laurent gives what will easily be one of the best performances of 2021. She’s perfect for this part, reminding viewers of her incredible range while locked into a performance in which she basically only uses her face and voice.

Some people won’t be completely satisfied by the final act of “Oxygen,” but I think it holds together, and it’s undeniably remarkable even if judged purely as an acting exercise. Thanks largely to Aja’s momentum and Laurent’s performance, I also found it surprisingly moving for this kind of high-concept thriller. Liz wakes up to a situation she never imagined and has to figure out how to save herself before her oxygen runs out. Flashbacks to hospitals with masked patients and doctors place the tension even more firmly in the COVID era while never explicitly drawing that parallel in a way that heightens the tension. Without spoiling anything, it becomes a film that intertwines both grief and optimism, which kind of defines where so much of the world is at in 2021, assessing what we’ve lost while hoping for the future.

(Note: Netflix often defaults to dubbed versions. Watch this in French. Mine started dubbed and you'd lose so much of Laurent's performance if you let someone else speak for her.) 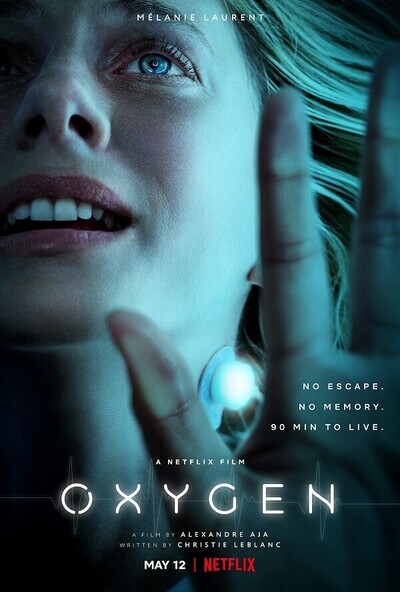