This originally ran on March 6, and we are re-running because of its early VOD drop.

“Onward” springs from a deeply personal place and nestles on a heartbreaking premise: the possibility of being able to spend just one more day with a parent who has passed away.

But the high-energy, pop-culture-heavy result feels frantically eager to please, until it tries to yank at your heartstrings in the by-now familiar formula of Pixar Animation. (And of course, the idea of a deceased parent as a crucial plot point is practically on page one of the Disney playbook. My 10-year-old son even commented on this while walking back to the car after a Saturday morning screening.) The film is episodic in structure, leaping from one place to get one thing before leaping to another place to get another, and so on and so on in a series of breathless fetch quests. But in the few moments when it settles down and allows its characters to interact with one another in a meaningful way, “Onward” provides a glimpse of what director and co-writer Dan Scanlon probably was aiming for in sharing an intimate piece of his childhood on the big screen.

Scanlon, who previously directed the lively sequel “Monsters University,” was inspired by the death of his own father when he was just a year old; his brother, who’s a few years older, had only hazy memories. From his own loss, Scanlon—with co-screenwriters Jason Headley and Keith Bunin—tells the story of two elven, blue-haired brothers living with their widowed mother in a suburbia that was once full of magic. Long ago, it was a place of unicorns and mermaids and fairies, resplendent with rolling, green hills and tinged with pixie dust in the air. Now it looks a lot like ... Burbank, actually, where The Walt Disney Co. is based. The mixture of old and new reveals itself in some clever ways—tract houses are shaped like oversized mushrooms and baby dragons serve as perky, slobbery pets. But while the background details can be quite lovely in their tactile realism—shafts of sunlight, bumps of asphalt—the bulbous and simplistic character design is blandly off-putting.

Thankfully, the voice work from stars Tom Holland and Chris Pratt is strong enough to overcome that, somewhat. Holland plays the shy, skinny Ian, who was in his mom’s womb when his dad died; he’s hoping that turning 16 will inspire him to make friends and take chances, and he has a checklist of goals to make it all happen. Pratt plays boisterous big bro Barley, who’s a bit stunted and still living at home with their mom (Julia Louis-Dreyfus, who makes you wish there were more to her character); he’s into a Dungeons & Dragons-style role-playing game and drives a retro van with a unicorn emblazoned on the side. Despite their inherent differences (or perhaps because of them), the two have a likable chemistry with each other. So when Barley says playfully to Ian early on, “There’s a mighty warrior inside of you, you just have to let him out,” the sentiment comes from a place of authentic kindness and doesn’t sound as mawkish as it might look on the page. (Plus, it’s just amusing to imagine a world in which Spider-Man and Star Lord are brothers affectionately messing with each other.)

Both guys get a chance to tap into their hidden adventurer when their mom reveals a secret to them, one she was meant to hold onto until Ian’s 16th birthday: Their father left them an ancient staff with a rare gem to place atop it. Those items, along with a few magical words, would bring him back to them for 24 hours—but they could only perform the spell once and they had to get it exactly right. Naturally, in the excitement of this newfound knowledge, nothing goes as planned; they only get halfway through the spell, resulting in their father appearing from the waist down as just a pair of khakis and shoes with whimsical socks. It’s a strange idea and an even stranger image. In order to make the most of their limited time with him, they must go on a journey through their seemingly mundane town to finish what they started and make their dad whole.

They struggle to achieve this by dragging their half-dad along, fastening a stuffed torso and a baseball cap onto his pants and trying to act as normal as possible in public, even as they’re yanking him around by a retractable dog leash. The floppy, “Weekend at Bernie’s”-style physical comedy is good for a laugh or two but grows old quickly and eventually feels like easy, go-to shtick. Among their many stops is a family-friendly tavern, complete with a salad bar and a claw machine, which used to be a dangerous hangout for fearsome creatures of all kinds; the manager, a once-powerful manticore (Octavia Spencer, a standout), has grown complacent but longs to reclaim her badassery of yore. She ends up getting sucked into the quest, along with Ian and Barley’s mom, in a subplot that feels wedged in and does both of these supremely talented actresses a disservice. And the climactic showdown with a makeshift monster is just so much noise and wreckage—until it stops abruptly and shifts to a teary-eyed conclusion.

The pacing is so jarring that the emotional payoff doesn’t develop as intended. And the overall irony, of course, is that this is a movie about the need for magic that could have used a little more of the stuff itself. But if it makes you think of your mom and dad fondly, even for a moment, well at least that’s something. 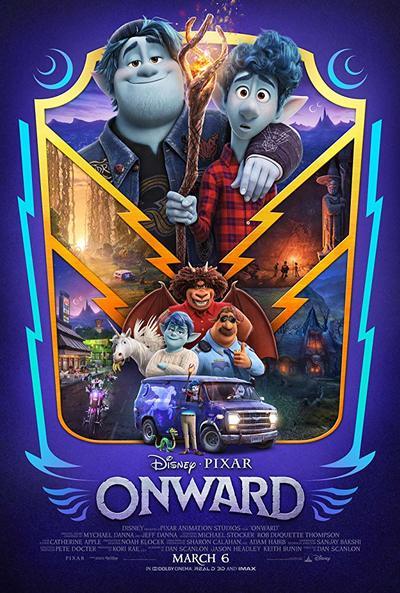 Rated PG-13 for action/peril and some mild thematic elements.