The Chinese romantic-drama “Only Cloud Knows” is sappy, slow, and mostly effective. It’s also a notable change-up for director Xiaogang Feng (“Youth,” “I Am Not Madame Bovary”), the popular mainland filmmaker who’s sometimes called “China’s Spielberg” because of his melodramatic blockbusters’ inescapable popularity. Feng’s CV is a mix of tones and styles that includes broad comedies (“Personal Tailor”), historical dramas (“Aftershock,” “Back to 1942”), and popcorn thrillers (“Cell Phone”). With “Only Cloud Knows,” Feng has made another melancholic tearjerker in the same vein as his two “If You Are the One” rom-drams (2008 and 2010). “Only Cloud Knows,” which follows a widower’s attempts to better understand his dead wife, is a little more ponderous than his earlier weepies, but is often involving and usually affecting thanks to Feng and writer Ling Zhang’s focus on little anecdotal details taken from real-life couple Shu Zhang and Yang Luo’s lives. So while Feng’s latest may be unbearably sentimental and too blunt, it’s also good enough, if you’re looking for a little romance and a good cry.

“Only Cloud Knows” starts slowly: love-sick widower Dongfeng Sui (Xuan Huang) gets into a beat-up sedan, and heads out (while a syrupy acoustic guitar ballad plays) to the New Zealand country home where he and his late wife Yun Luo (Caiyu Yang) spent 15 years together. Yun and Dongfeng have Anglicized names (Simon and Jennifer, respectively), but Dongfeng prefers their Chinese names because their translation has a cute resonance—he’s the “wind” to her “cloud.”

In the first half of Dongfeng’s story, he remembers living and working with Yun at Yun’s Chopsticks, their Clyde-based Chinese restaurant. He and Yun have a cute dog named Blue, a steadfast mutual friend named Melinda (Lydia Peckham), and a lot of beautiful, flat grasslands to bask in. Dongfeng’s memories are mostly sweet, though he also recalls some darker moments, like a close call he and his wife had with a drunk (and obviously racist) customer, who threatened them with a gun tucked in his waistband. Even this scene is mostly gentle since it boils down to hard stares, sincere apologies, and tight embraces. This half of “Only Cloud Knows” is consistently warm, as in any scene involving Blue. Blue’s story obviously ends unhappily (this is a romantic-drama), but even his scenes are filled with enough pregnant pauses to make the movie’s relentless wistfulness mostly charming.

But wait, there’s a lot more where that kind of oppressive melancholy came from: after about an hour of reminiscing, Dongfeng realizes that he didn’t understand Yun as much as he’d like. So he flashes back again, this time to when he first met and became engaged to Yun. Here’s when “Only Cloud Knows,” a movie whose dreamy title makes it sound like a forgotten message movie from the 1960s, will either completely turn you off or break you down. Because at this point, Dongfeng whips out his dead wife’s ashes, and goes on a whale-watching tour near Auckland, where he and Yun first met (she loves blue whales). Dongfeng tells the ship’s captain a few more things about Yun, like how they first communicated through snippy post-it notes (Clean the dishes!) left around the two-story apartment that they both sub-let from kindly Chinese expatriate Mrs. Lam (Fan Xu). As usual, there’s a silver lining to every cloud: even a fist fight over a parking space end with an Auckland police officer telling Yun that Dongfeng really cares for her, and also, he would make a great cop. Nobody stays mad at each other for long in “Only Cloud Knows,” so there’s really no major conflict to resolve.

The movie’s gauzy, sad atmosphere makes even laughably precious scenes feel momentous, like when Yun agrees to marry Dongfeng on the condition that they win big at roulette, using the world’s slowest roulette wheel. This scene may be obvious and canned, but it still works, much like the inevitable (and seemingly interminable) scene where he spreads her ashes in what only feels like slow motion. When you think about what you’re looking at—even for a second—the moment passes. But then the scene keeps right on going, and it’s somehow mushy magic all over again? Then back to silly … but maybe unbearably sad, too?

The best parts of “Only Cloud Knows” are both impossibly silly and touching. Feng and Zhang sometimes make their movie’s glacial pacing feel like an extension of their protagonists’ doomed, chaste romance. Dongfeng’s intrusive (but also infrequent) voiceover narration slaps a tidy bow on his story, but the movie’s big emotional beats still land. I’m especially taken with the scene where Dongfeng proposes to Yun. While a hot pot samovar boils loudly in the foreground, he tells her, at length, how much he cares for her: “From now on, I'll drink water so you can drink wine. I'll eat rice so you can eat meat.” There’s a fair bit of dead air in “Only Cloud Knows,” but that’s a smooth line. 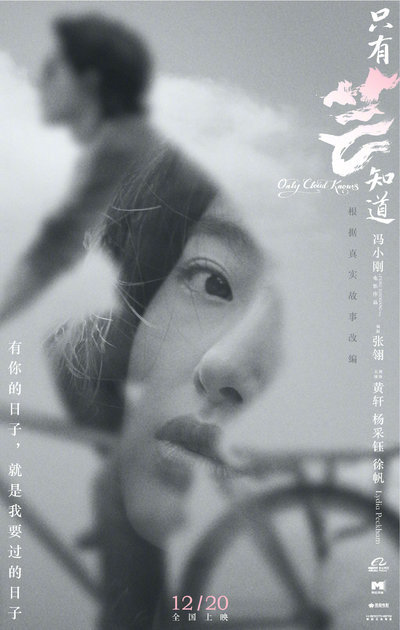