One Week and a Day

“One Week and a Day” is an incredibly tactful tragicomedy from debut writer/director Asaph Polonsky about two parents figuring out what to do next after their son dies. In the long list of movies about death, this is one of the most original in recent memory, if for its emotional delicacy in sparing us hollow, tear-gushing grandiosity, and for its attitude on life: In most movies about grief, you are waiting for the characters to cry. This is a marvelous story about loss in which you are waiting for them to laugh.

The movie starts at the end of the week-long mourning period of shiva, which is being held for Ronnie, the son of Eyal (Shai Avivi) and Vicky (Jenya Dodina). The friends and family have left (and their reccurring neighbors/former friends are dead space, about the only major writing flaw in this film) while the middle-aged married couple try to regain their balance in the world. Eyal becomes fixated on getting back a blanket that his son had in the hospital, a trip that leads him to a now-occupied hospital room but a bag of Ronnie's medicinal marijuana. Eyal's supposed to be focused on securing the two burial plots next to his son, before they are reserved by someone else. Instead, he is concerned with putting the weed to use, but he can’t roll a joint and he has never smoked before.

Polonsky's film has a pivotal sequence early on where Eyal, portrayed vividly as both boyish and destroyed by Avivi, tries to roll up the papers and keeps ripping them. It’s not a laugh-out-loud funny moment but its cathartic humor shines within such grave simplicity: you just want this sad man to get high. The whole presence of marijuana in Polonky’s story ushers in delicate comic relief, especially as Eyal and the viewer are given a moment to escape the sobering phenomenon of his and Vicky’s grief. But it only adds more layers to the tone of this incredibly thoughtful screenplay, the kind that creates honest drama out of acute dialogue and just a few characters and locations.

Eyal eventually receives help in rolling and smoking joints from his son’s old friend Zooler (Tomer Kapon), a dopey, smiley young guy who becomes yet another symbol of Polonsky’s directorial confidence and emotional intelligence. He’s the character with the most color and least visible trauma, like Sean Penn’s Spicoli taken down a notch. But he is a fictional being of such unwitting compassion that he too enhances this story. Even when he performs a balls-to-the-wall air guitar solo act—viewed in one take from behind the shoulders of an unamused Eyal—he remains a sincere contrast to the sadness that a film like this needs to handle very carefully.

But death is an independent process too, as expressed through the actions of Vicky and a quietly devastating performance by Dodina. She presents herself as more put together than Eyal because she has more emotional distance. Vicky has a cold cool to her while heading out to see the grave or when she’s especially unamused by Eyal’s pot. And while Eyal skips work after the shiva, Vicky tries to resume her job as a substitute teacher, only to find out that the school insists on keeping the already-hired substitute. A sense of normalcy finally comes to her life when she is called about a dentist appointment she had initially forgotten. When she’s finally in the dentist’s chair, alone with her thoughts and unable to speak, she provides images of unexpected catharsis, thanks in part to Dodina’s intricate stoicism.

As the film follows these three characters in their day after shiva, it takes on an unexpected form as a quirky comedy, albeit with a lot of soul. Polonsky does this with a couple of very sweet scenes featuring a girl whose mother is in the same cancer ward Ronnie used to be, doing some playacting that involves stealing lab coats and pretending to be doctors. While that idea might sound twee, in Polonsky’s film it soars because of the emotional weight in place, the significance such a small act has to each character and the delicacy with how Polonsky overplays none of it. In one of its most unforgettable successes, “One Week and a Day” restores a sense of heart, and a positive definition, to the often condescending idea of a crowd-pleasing film. The emotional effect is one that must be seen, and felt, to be believed.

Even then, Polonsky's debut has more to say. In its final act, the movie reckons with the sadness Eyal and Vicky have been able to distract themselves from, and achieves unexpected power by introducing us to a completely new character. This person has their own life story, and Eyal just listens. It becomes a fitting gesture from Polonsky’s gorgeous film, which gradually crescendoes with the beauty of unexpected compassion, all while concerning the stark reality that life goes on, no matter who dies. 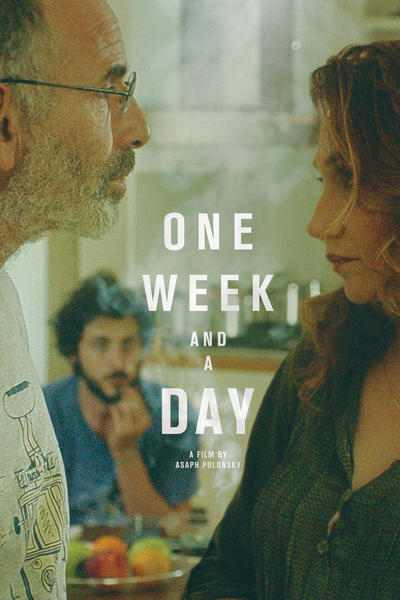