Once Upon a Time in Venice

After decades of kicking ass and taking names as one of America's foremost action stars, it's somewhat easy to forget that Bruce Willis began his career as a comic actor. Before "Die Hard," there was "Moonlighting," where Willis, alongside Cybill Shepherd, perfected casual, barbed banter as well as his sly wit. He still employs the latter in many of his features, usually in one-liners in between shootouts, but it's rare that a film asks him to prioritize his comedic talents over his considerable action prowess.

The best thing that can be said about "Once Upon a Time in Venice," a very light action comedy from Mark and Robb Cullen, is that it allows Willis to cut loose and have fun. He plays Steve Ford, a private eye in Venice Beach who appears to mostly just skateboard, sleep around, talk shop with his recently-divorced, mildly depressed best friend Dave (John Goodman, also cutting loose and having fun), and occasionally solve minor mysteries. The film mostly consists of two-hander scenes where Willis gets to crack wise with various character actors, and generally be a likable screen presence. It's genuinely nice to see him work in that mode.

But though Willis, Goodman, and roughly half of the large supporting cast (which includes Thomas Middleditch, Adam Goldberg, Wood Harris, and Kal Penn, just to name a few) acquit themselves well, "Once Upon a Time in Venice" largely suffers from profound laziness. Its bare bones plot isn't the issue (Willis' beloved pup has been stolen by Jason Momoa and his drug gang) since it mostly strives for an ambling, shaggy dog tone, but it has no rhythm. It awkwardly shuffles along from scene to scene while introducing various inane plot points that abruptly conclude before they're developed. There are plenty of thinly-sketched characters whom the film discards or forgets at will until they're suddenly necessary for any given scene. It's amiable and pleasant, but never exactly funny. It features a completely unnecessary, wholly smug voiceover, courtesy of Middleditch. Plus, for a 90-minute film, there's way too much padding to speak of, especially in the first "act," if you can call it that.

The Cullens clearly wanted to tell a character-based story starring Willis as a lax private dick who acts his shoe size rather than his age, and to their mild credit, they have all the material for that kind of feature. Willis fits the part well and they pepper the film with enough incident to both keep the story afloat and allow a threaded character study. Unfortunately, the Cullens deal primarily in the superficial, which all but negates this effort. They do the bare minimum to ground Willis' character in reality without going through the effort to give him much characterization, let alone depth. They hint at some backstory (he's a disgraced cop and there's suggestion of a troubled past home life), but they mostly want to ignore the work of development and skip right over to the fun stuff. In other words, this ain't "The Long Goodbye." 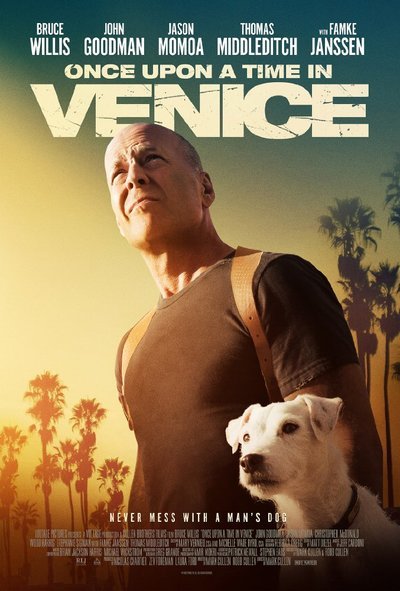