On the Right Track

If there's anything I can't stand in a movie, it's a sweet, lovable, cute little kid who is so adorable, and knows he's so adorable, you want to cringe. That's why seeing Gary Coleman in “On the Right Track” was so much fun for me. I don't know how other people relate to Coleman, the precocious three-foot-nine-inch star of TV's "Diff'rent Strokes," but in my opinion he is the shortest cynical adult in the history of the movies.

It is probably true, I suppose, that Gary Coleman is cute. He is probably also capable of being sweet, and no doubt his family loves him. But Coleman doesn't bask in his own high opinion of himself. He always seems to be thinking up a scam. In a scene where a big-city mayor comes to pat Coleman on the head and tell him what a great kid he is, Coleman sizes up the mayor like he's getting ready to ask for a patronage job. Gary's tireless self-assertion in his relationships with adults is the best thing in this movie.

Unfortunately, there are also a great many other things in “On the Right Track.” What could have been a bright little comedy is so jampacked with supporting players, subplots, and distractions that it seems much longer than it is, and even Coleman's fortitude doesn't get us through. Gary plays a little shoeshine boy who lives in a double locker In Chicago's Union Station. He's a little hustler who knows all the people in the station, especially the pizza man (Herb Edelman) and the cashier in the amusement arcade (Lisa Eilbacher). They look out for him, especially when the cigar-chewing boss of the shoeshine concession tries to run him out of business.

The plot involves a well-intentioned ploy by the city to move Gary from his locker in Union Station and into an orphanage (which is run by a towering matron who looks like Ilsa, She-Wolf of the S.S.). Gary doesn't like it in the orphanage. And when his police juvenile officer (Michael Lembeck) discovers that the kid has the gift of perfectly predicting the winning horses in the daily trifecta, suddenly a whole lot of adults get very protective of Coleman.

Up until this point, the movie works just fine, especially on the several occasions when Coleman steals a scene from his colleagues and just walks away with it. He has dialogue, doubletakes, one-liners, and reactions that are absolutely inimitable. Unfortunately, the movie strays away from Coleman's special qualities and gets distracted with several subplots, including (a) a romance between Eilbacher and Lembeck, (b) their plan to adopt Gary, (c) the local mayor's plan to use Gary's race predictions to retire the city debt, and (d) the totally unnecessary introduction of a whole scheme involving the Mafia, and (e) Coleman's own plan to organize a bunch of other kids into a freelance redcap operation. This abundance of plotting eventually becomes baffling, and the movie begins to resemble a headlong dash through its cast of characters. Too bad. The cast is good, even if it's too populous (Norman Fell has an especially droll scene with Gary while they're seated on top of a billboard in Union Station). And Coleman himself has special qualities worth exploring in a movie that's less manic, and more willing to give its characters time to be themselves. 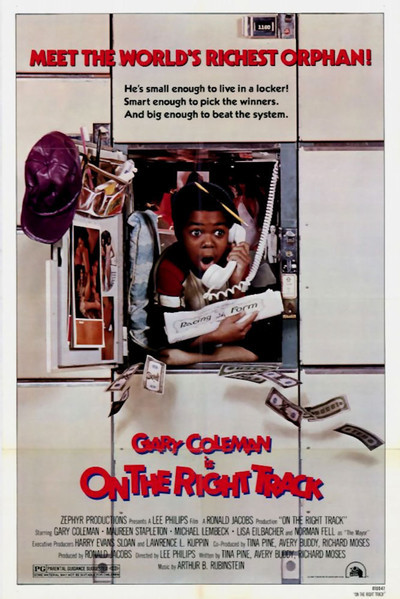