The story of how “Olympic Dreams” got made is more compelling than the movie itself.

Director Jeremy Teicher, Olympic runner Alexi Pappas and comedian Nick Kroll ran around the 2018 Winter Games in PyeongChang, South Korea. They’d gotten intimate, behind-the-scenes access through the Olympic Artist-in-Residence program, and their film is a blend of fiction and reality. Pappas plays Penelope, a cross-country skier; Kroll plays Ezra, a volunteer dentist. The two meet up during downtime at the games and embark on a hesitant but sweet romance. All three co-wrote the script, with Teicher following them around, serving as cinematographer. (Teicher and Pappas, who are husband and wife, previously collaborated on the 2017 drama “Tracktown.”)

The trio takes us all over the games site, from the athletes’ village and the dining hall to the venues where real-life competitors are preparing for their events, as varied as skeleton, curling and ice dancing. When Penelope hangs out with a hunky, tatted skier named Gus, that really is hunky, tatted skier Gus Kenworthy—and the two share the film’s loveliest scene. (All the athletes playing themselves are credited at the end, alongside their countries and the sports in which they compete.) We also walk with them at the opening ceremonies, dressed in their official gear and surrounded by the pomp and splendor of it all, which is a bit of a thrill.

The guerrilla-style approach is ambitious. The access is incredible. The film itself, however, is less so.

Pappas, who set a Greek record in the 10K at the 2016 Summer Games in Rio de Janeiro, and Kroll, best known for his comedy work on “Kroll Show,” “Big Mouth” and “The League,” have an easy, playful chemistry with each other that’s actually more believable in the early stages when their characters are just friends. Both are in a state of uncertainty and flux, an intriguing starting point. Penelope is 22 and trying to figure out what to do with her life once the athletic career she’s devoted everything to is over. Ezra is 37 and still in denial over the breakup with his fiancée back home in New Jersey. She’s ordinarily introverted but allows herself to open up in this foreign setting; he’s a little nerdy, a little needy, but a gregarious, good guy. As they roam outside the Olympic confines together, enjoying Korean BBQ, the beach and beers, their earnest, goofy awkwardness is appealing.

But they’re less convincing during the film’s heavier, more emotional moments. “Olympic Dreams” depicts the feelings of loneliness and isolation that can linger when you’re halfway around the world, separated from all that’s comfortable and familiar. It also explores with honesty and clarity the kinds of quick and unexpected friendships that can develop in that sort of unusual situation. In doing so, it’s perhaps understated to a fault, and with dialogue that often seems unscripted and a little lifeless. Pappas has a natural screen presence with her wide eyes and wild hair, and the multitalented Kroll continues to improve as he reveals his dramatic instincts. (He previously dipped his toe in these waters, with less success, in “Loving.”) But the romantic tension everyone is aiming for here never fully develops, leaving too many would-be poignant moments feeling frustratingly inert. And neither of them is completely up for the confessions of the movie’s big climax.

Still, it’s hard not to appreciate the independent spirit at work here, the inspiration and the hustle to make it happen. We get enough glimpses of various Olympians from around the world, though, that it makes you wonder what a documentary might have looked like with this sort of access instead. Maybe they’ll do it all again, through a different kind of lens, in Beijing in 2022. 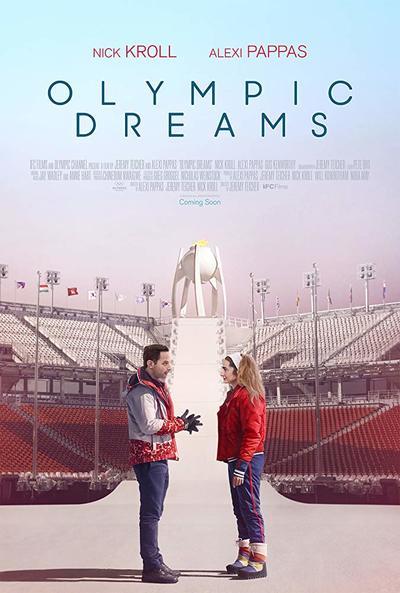 Rated PG-13 for some language and sexual references.