“The essential American soul is hard, isolate, stoic and a killer,” British-born D.H. Lawrence asserted in his seminal 1924 book Studies in Classic American Literature, in which he considered writers ranging from Franklin to Poe to Melville and others. Lawrence had a point, to be sure, but his remark seemed to have opened a Pandora’s box of self-consciousness for subsequent writers and artists.

So when this movie opens, and the title "Old Man," played with the energy, inventiveness, and commitment we’ve come to expect by protean actor Stephen Lang, awakens from a night of apparently uneasy dreams, and we see his face in a closeup that renders him in perfect focus while distorting the light around him, we can guess a lot from that vibe alone.

This old man, who we learn has a name, is definitely isolated and hard, but he sure is not stoic. He’s muttering imprecations and puttering around his rather well-kept cabin in the mountains/woods when there’s a knock on the door. The old man greets his visitor, shotgun in hand. Rather than immediately turn tail and run, the younger man, named Joe, and played by Marc Senter, says he’s a hiker and that he’s lost. Eventually the old man pulls him inside, and the conversation, pretty hostile from the old man’s side, begins. And so the viewer realizes that the "killer" part of the character is bound to emerge.

“I ain’t too convinced that what you’re saying ain’t a heaping pile of shit?” the old man says, going on to further ask “How do I know you’re not some kinda goddamned psycho killer?” The younger fellow is flustered but manages to keep up. There’s some talk of cannibalism. The younger man says he’s not one, and the reason he gives is “It’s against the law.”

“It’s against the law,” the old man agrees. “And besides, eatin’ people is gross.”

The writing, particularly the dialogue, is the weakest portion of this picture directed by Lucky McKee. The screenplay by Joel Veach includes such chestnuts as “That’s the trouble with you young people nowadays.” At a later point, the old man speaks of drugging a prior visitor, saying he “put a little something something” in the man’s drink. I don’t think that idiom is something a rural quasi-hermit would pull out of his conversational kit bag but there you have it.

In the first half hour or so one fears this two-hander is some kind of allegory with a genre twist. McKee’s staging in the confined cabin can’t be faulted, and the mise-en-scene, as they used to call it, is similarly well-thought-out. And the story does eventually get to a point where it leaves allegory and becomes a kind of horror film. The tables turning in the power dynamic between the two characters is predictable, but McKee handles this adroitly and applies some Lynch-inflected discomfort to the proceedings. The movie builds up enough steam, and has a sufficient supply of jolts, to make “Old Man” stick to the ribs at least a little by the time it’s over. 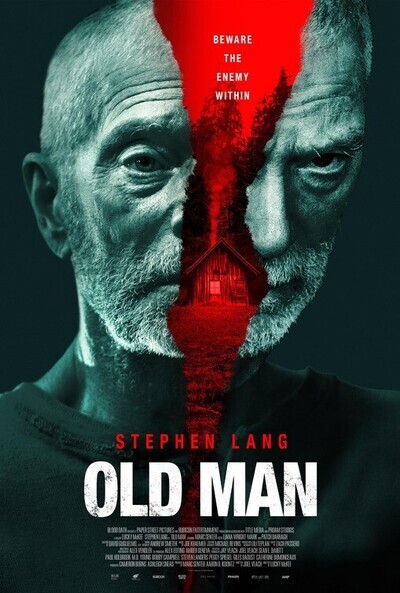