Let’s be generous to “Office Christmas Party” and note that its two directors (whose resume includes “Blades of Glory” and a short-lived sitcom based on the GEICO caveman ads) and six writers (among them, a Borat enabler and the two guys who created “The Hangover”) were onto something when they tapped into our nation’s growing pushback against political correctness. A workplace throwing an early-morning “non-denominational holiday mixer” with a one-drink maximum, as portrayed in the opening scene, is pretty much the on-the-job version of that overtly generic Starbucks yuletide coffee cup that was declared part of the supposed war on Christmas, is it not?

They also recognize that current-day corporate culture regularly rewards those in the upper echelons of power who save money by screwing over the staff with downsizing, lower pay, fewer benefits and greater demands. Who better to represent these modern-day Scrooges than Jennifer Aniston, a veteran of both “Horrible Bosses” films? I would rather see her in “Cake 2: Another Slice” than one more mediocre mainstream movie, but maybe that's just me.

But the former “Friends” star’s career choices aren’t the issue here. Comedy is. Something most of us are in desperate need of right now, given the current headlines and the usual spate of downer year-end Oscar hopefuls. Alas, "Office Christmas Party” serves as yet another reminder that allowing your cast to madly improvise (as evident with an unnecessary end-credits blooper reel) instead of actually providing a coherent script with a scintilla of logic often leads to a decline in sustained laughter. Imagine if the iconic toga party in “Animal House” was the entire movie. It might be a kick for a while. But it was so much better coming after the Deltas were about to reach rock bottom and needed to have their rebellious spirits revived with excessive drinking, wild cavorting and acoustic-guitar smashing.

Instead, this ragged R-rated wallow in bad behavior, some of which eventually results in exposing naked body parts of people who should definitely be wearing more clothes and not less, comes up with a rather ill-conceived concept to put the plot in motion. Basically, Aniston’s hard-of-nose and sleek-of-hair CEO Carol stomps into the Chicago branch of an internet company called Zenotek, starts tearing down the festive tinsel and threatens to close it because it isn’t contributing enough to the bottom line.

The twist is that the office full of insecure geeks is run by her irresponsible and carefree brother, Clay (T.J. Miller of TV’s “Silicon Valley”), who hatches a plan to woo a staid new client (Courtney B. Vance, much more amusing in his Emmy-winning role as Johnnie Cochran on “The People v. O.J. Simpson”) by impressing him with an out-of-control holiday orgy. Highlights include a living manger complete with a rented baby Jesus, an ice sculpture with a priapic spout that suggestively squirts eggnog (responsible for the scene that draws the biggest reaction), water coolers labeled “Tequila,” “Vodka” and “Gin,” and a snow-making machine that at one point accidentally blasts cocaine at the revelers.

Assisting in the debauched excess is a rather subdued Jason Bateman as Clay’s newly divorced right-hand man with an unrequited crush on Olivia Munn’s sexy brainiac, who is on the verge of a discovery that will forever change the internet. But first things first, as she and Bateman have to dress up in chubby snowmen costumes and bounce their bellies together on the dance floor.

It takes a certain kind of film to waste “Saturday Night Live” standout Kate McKinnon’s reliable talents but this would be the one, forcing her into the role of an uptight human-resource enforcer who threatens employees by sneering, “I know why you took a medical leave,” and telling females who don low-cut blouses to put “Dancer and Prancer” back where they belong. She even is burdened with trying to sell the requisite running fart joke, one that actually involves cut cheese.

Thanks to a subplot launched after a leggy escort is hired to pose as a shy employee’s girlfriend, Bateman, McKinnon, Munn and Aniston end up attempting to rescue Miller from a den of gangsters, one of whom engages in the lost art of mumblypeg for some reason. That leads to a dangerous high speed chase that should have resulted in several arrests and even lawsuits—not to mention the gross amount of damage done to the high-rise that houses Zenotek. Instead, it all leads to an improbable happy ending.

There are two performers in smaller roles that deserve to be put on Santa’s nice list. First up is Da’Vine Joy Randolph, as an aggressive security guard who probably has the best chemistry banter-wise with Bateman. Warily eyeing the rowdy overflow of off-the-street party crashers filling the office building’s lobby, she alerts him before he goes off to save Miller, “The security guard was the first one to go in “Die Hard.’”

Then there is the intriguingly named Fortune Feimster as a testy first-time Uber driver who takes Carol back to the office from the airport after a snowstorm grounds all flights. She launches into a spiel about how Carol is an old person’s name that contains a reference to the Pixar animated film “Up,” which provided me a rare chance to laugh without guilt.

Hey, if anything here makes you smile, go for it. It just didn’t do much for me. But I still can’t get over one cheesy move when Aniston starts waving around the book, The Girl on the Train, for no reason. It seems the same production companies that made this (DreamWorks SKG and Reliance Entertainment) also gave us that early fall hit based on the bestseller. Now that’s the spirit of the season. 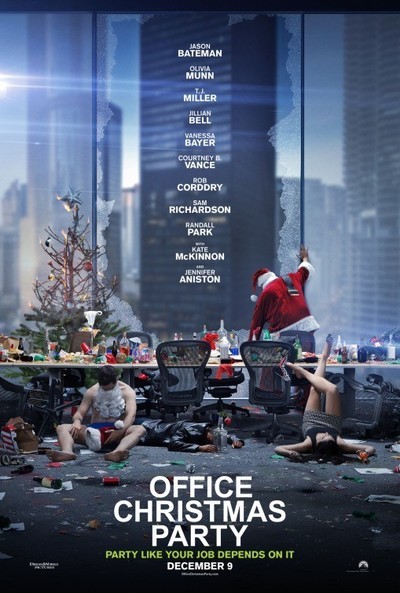 Rated R for crude sexual content and language throughout, drug use and graphic nudity.

Courtney B. Vance as Walter Davis