I was living in England in the fall of 1995 when a little album called (What’s the Story) Morning Glory? by Oasis landed in stores. It’s difficult to explain to people who weren’t there just how big an event this was nationwide. There’s no equivalent that I’ve seen stateside since. Oasis wasn’t just a musical phenomenon; they were the biggest news in the country. Headlines in major newspapers centered on the band and their charismatic but contentious brothers Liam and Noel Gallagher. At its best, “Oasis: Supersonic,” the new documentary about Oasis, captures this sense of instant superstardom, such as in moments in which the band is stunned at how many people know the words to even their new songs at concerts. In the span of two albums, 1994’s Definitely Maybe and Morning Glory, the guys from Oasis had gone from getting high in their mom’s house and playing small gigs to being gigantic stars. But “Supersonic” focuses almost entirely on that rise, offering insight into how they got to the top of the world, even if it comes up short in explaining why they didn’t stay there for long.

The stories about the “bad boy behavior” from Liam Gallagher are notorious and plentiful, and “Oasis: Supersonic” doesn’t shy away from the tabloid aspects of Oasis. Before it even gets going, Liam has been compared to a Ferrari (fun but dangerous) and phrases like “head cases” and “out of control” have been used. And the film rests on the same thing Oasis did—the odd dynamic between Liam and Noel Gallagher that created both fantastic music and miserable days on stage and behind the scenes. Noel compares himself to a cat and Liam to a dog—Noel needs to be alone, writing songs and doing his own thing; Liam needs attention and love. One of the best lines is “Noel has a lot of buttons, Liam has a lot of fingers.”

What most Oasis fans knew at the time and is even clearer now is that Noel was an amazing songwriter. His songwriting for the first two albums (which is all the film focuses on, to its detriment) is something stunning to behold. Basically, director Mat Whitecross’ film gives the impression that Noel’s songwriting was something of a God-given talent. After being talked into forming Oasis after being fired from being a roadie for the Inspiral Carpets, Noel became the kind of songwriter who just wandered in with instant hits. Early on in the film, they’re sort of just screwing around and he comes up with “Live Forever.” One of the bandmates, Bonehead, didn’t even believe he had written it.

Another day, they ordered takeout and Noel says, “I wrote Supersonic in the time it takes six other guys to eat a Chinese meal.” They recorded Morning Glory at the rate of a song a day. Noel would give Liam the lyrics, he would sing it, and they would move on. They have a recording of “Champagne Supernova” which looks like it’s the first time that Liam is singing it off a notepad, and it’s basically perfect.

Of course, many fans who already know how much they love Oasis will come to the film looking for dirt, and there’s not much here. We get a little bit of family insight in terms of how the brothers were treated by their father. They both watched their dad beat their mother, but the old man only abused Liam, who literally says that he “beat the talent into [him].” We hear horror stories about Liam’s on-stage behavior, including the fact that Noel became a singer merely because Liam would leave the stage almost an hour early and someone had to finish out the concert. We hear about almost-breakups and some of the shuffling of the rest of the band.

And then “Oasis: Supersonic” kind of just ends. With a two-hour film, Whitecross doesn’t get very far in the overall history of the band, focusing solely on their bumpy rise to the top and ignoring everything that’s happened since then. We don’t even see Liam or Noel, who do their interviews in voiceover over archival footage. There’s something interesting about staying there in that peak ‘90s moment of fame, but someone completely unfamiliar with Oasis might think they broke up in the mid-‘90s. (They released five more albums, some of which were very well received.) While “Oasis: Supersonic” is never boring, especially for fans, it’s also not quite deep enough to justify its narrow focus, especially at its overlong running time. There’s more to the Oasis story than what we see here, even if this does capture that historic moment when two brothers from Manchester fronted the biggest band in the world. There was something special about Oasis that will never happen again in an era when albums don’t sell and social media would destroy a self-destructive personality like Liam Gallagher. Trust me. I was there. 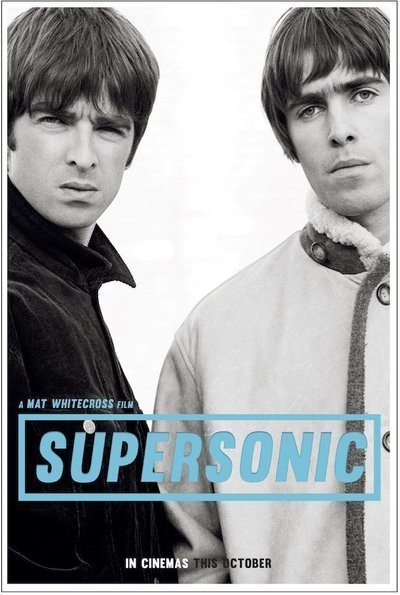 Rated R for pervasive language and some drug material.