From the pre-Code glories of Barbara Stanwyck in the immortal "Night Nurse" to the Roger Corman drive-in favorites of the '70s to any number of late-night Skinemax favorites, the nursing profession has served as a particularly fertile source of inspiration for producers of sleazy exploitation fare. That fine tradition continues with "Nurse3D," a film so unabashedly sleazy in every conceivable way—as well as a few inconceivable ones to boot—that it almost feels as if anyone paying to go see it in a theater should be required to do so using only dollar bills.

Our anti-heroine is Abby Russell (Paz de la Huerta), a sexbomb nurse who spends her days patrolling the halls of All Saints Hospital while struggling mightily to stay within the confines of her outfit, and spends her nights blowing off steam by pursuing and brutally murdering married men who are straying from their wives. If that weren't enough, she also becomes erotically obsessed with new nurse Danni (Katrina Bowden) and becomes determined to steer her away from her amiable lump of a boyfriend (Corbin Bleu) and into her arms. At first she tries to lure Danni the old fashioned way—a night of drinking, dancing and roofies, a bizarre sexual encounter and what can only be described as a bottomless cup of coffee—but when that fails to work, stronger measures are then required.

When Abby's chief plan of attack—murdering Danni's lecherous and unfaithful stepfather (Martin Donovan)—also fails to produce the desired effect, she uses her considerable cunning to make it seem as if Danni is the dangerously unhinged type. While Danni is off trying to prove her innocence and uncover the dark secrets of Abby's past, Abby kills time, among other things, by gruesomely bumping off a few other ancillary characters, including an annoyingly cheerful HR administrator (Melanie Scrofano) and the lecherous Dr. Morris (Judd Nelson), before the inevitable Grand Guignol-style finale in which the hospital's sharpest instruments (which do not appear to include any of the staff) are deployed to maximum effect.

If you ever wondered what the result might be if the screenplay for a Brian De Palma thriller somehow landed in the hands of the late, great Russ Meyer, "Nurse 3D" is the film for you. Director Douglas Aarniokoski and co-writer David Loughery have concocted a film that plays like an explosion in a warehouse of grindhouse film prints. Within the course of a mere 86 minutes, they jam in gallons of blood, ridiculously ripe performances, tons of beyond-purple dialogue (with the tone set early on when Abby narrates Danni's first encounter with a gory fatality with the instant classic "She lost her virginity and the blood flowed") and so many scenes involving showers, locker rooms and fetishy outfits that it sometimes feels as if All Saints may be the first hospital to require a two-drink minimum along with proof of insurance.

Stomping through the proceedings like a frequently naked bull in a china shop is Paz de la Huerta. Whether she can act or not is admittedly a matter for debate—all of her line readings are as flat as she isn't and she somehow manages to even snarl in a monotone at certain points. As a presence, however, she is clearly a force to be reckoned with throughout—so much so, in fact, that presenting the film in 3D almost seems superfluous since she practically leaps off the screen without the aid of those ridiculous glasses.

Is "Nurse 3D" any good by conventional critical standards? Of course not—it is ridiculously lurid trash from start to finish and anyone trying to argue otherwise is as crazy as its central character. However, while its aim may be low throughout, it at least comes close to consistently hitting its targets. I don't quite have the nerve to give it a full recommendation but I do have a certain affection for it and I wouldn't want to discourage anyone from seeing it for themselves if they were inclined to do so. 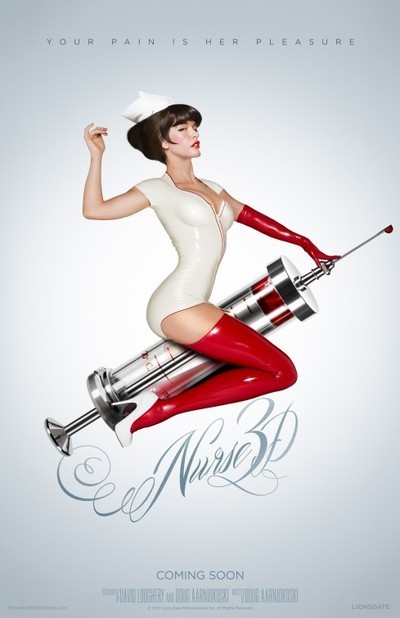