Quinn Shephard’s “Not Okay” warns viewers upfront that it has “flashing lights, themes of trauma, and an unlikable female protagonist,” but that’s only partially true. The latest from the director of “Blame” seeks to explore how social media embraces and even warps survivor stories through the tale of Danni Sanders (Zoey Deutch), an Insta-Wannabe who digs herself into a deep hole of lies regarding an international tragedy. Danni’s decisions are undeniably unlikable (and not always believable) but Shephard seems hesitant to fulfill on that warning, pulling back on some of the satirical potential of this twisted tale. Ultimately, it’s an entertaining dramedy with strong performances from Deutch and the quickly-rising-star Mia Isaac (also excellent in the recent “Don’t Make Me Go”), but it's too often willing to poke fun at easy targets instead of really asking why people lie for popularity or how we turn survivors of extreme violence into celebrities.

It's no spoiler to say that Danni Sanders becomes one of the most hated people in the world because “Not Okay” opens in the aftermath of her having been exposed as a massive, amoral fraud. Later in the film when Danni suggests she’s strong enough for a Twitter bully or two, it’s funny to think back on this opening wherein the entire internet seems to hate her. Why has Danni Sanders become the most canceled human being in years?

“Not Okay” jumps back two months to re-introduce Danni as a photo editor at an online mag called Depravity—a clever name for a site I would totally read. Her first scene with her boss Susan (Negin Farsad) is one of the film’s funniest as Danni laments the totally minor problems in her life, including being on a cruise vacation during 9/11, making her unable to experience it collectively with her age group. She's so shallow that she has "FOMO for 9/11". Even before the plot of “Not Okay” really kicks in, Danni has been set up as a social media creature who doesn’t understand the difference between tragedy and happiness—after all, both boost social followings, right? She's of an era where any definition that can be used in a social profile is a good thing.

And that set-up leads to the lie that will change Danni’s life. It starts simply enough. She stumbles through a conversation with her crush Colin (a pretty bland Dylan O’Brien), a co-worker who walks in a constant vape cloud, that ends with her saying she’s going to France. She’s not and can’t afford it. Instead of walking back the lie that Colin probably already forgot, she comes up with a plan. She uses her photo skills to make it appear that she’s on a writer’s retreat in Paris. One morning, she drops a photo of herself at the Arc de Triomphe, and then the City of Lights is attacked by terrorists, including a bomb right at that location she posted from. Danni decides to go with it, pretending to be a survivor, and her new social celeb status rises even higher when she aligns with an actual survivor superstar named Rowan (Isaac), who has become an outspoken activist after living through a school shooting.

There are a lot of claims in “Not Okay” that Danni is unlikable and won’t get a redemption arc, but the script constantly pushes back against the potential for a truly dark satire because it’s almost too empathetic to Danni’s cause. There’s a version of this film that really leans into the horror show of people who profit, in whatever way that word means, off actual tragedy. It feels like Shephard isn't quite willing to go there, leaving some of the film toothless. Danni does learn from Rowan. She learns that survivor stories come with real stakes, and that there are real people on the other end of hashtags like the one she and Rowan invent, #IAmNotOkay. (There's also an under-explored aspect to the script here about stealing other people's pain, as Danni does to Rowan.) Social media has a habit of dehumanizing people, and it’s nice to get a reminder of that fact in the Insta-Era. But I kept wanting “Not Okay” to be willing to live up to that opening salvo in a way that makes viewers truly uncomfortable.

“Not Okay” ends up somewhere in a valley between satire and character study. It’s not sharp enough to be the former and not realistic enough to be the latter. So what’s left? Another sharp piece of acting from Deutch—there’s a much worse version of this exact film with an actress who doesn’t understand how to walk the tonal tightrope of this character—and some interesting food for thought. I just wanted a little more to chew on. 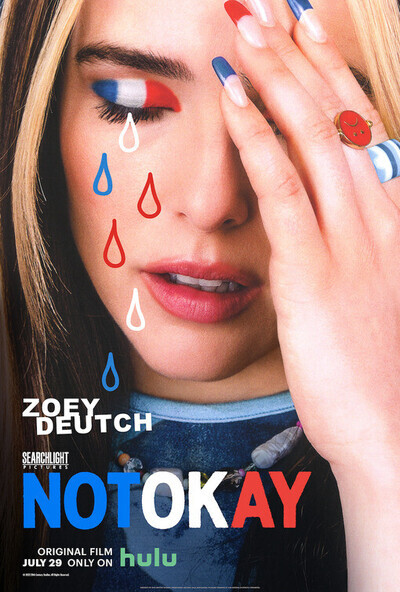 Rated R for language throughout, drug use and some sexual content.