In telling a story of violence along the Texas-Mexico border from a different perspective, “No Man’s Land” clearly has the best of intentions. Director Conor Allyn and his brother, star, and co-writer Jake Allyn, are trying to make us look at this contentious swath of land through fresh and sympathetic eyes, an instinct that’s certainly welcome after the past several years of xenophobic, build-the-wall rhetoric.

But the path to get there is long and slow, and frustratingly filled with thinly drawn characters and on-the-nose dialogue. As our conduit, Jake Allyn has a direct and appealing presence, but seasoned supporting players like Frank Grillo, Andie MacDowell, and George Lopez get far too little to play. For a movie that’s about a character on the run, “No Man’s Land” meanders and takes its time in a way that feels conflicting with the narrative.

The title takes its name from the section of land that’s north of the Rio Grande but south of the border fence. That’s where Allyn’s Jackson Greer and his family have a cattle ranch. A talented pitcher, Jackson is being scouted by the New York Yankees for a possible minor league baseball deal, which his parents (Grillo and MacDowell) see as his ticket to a prosperous future.

A confrontation along the border, however, throws that exciting prospect in jeopardy. While patrolling their property, Jackson, his dad, and his older brother (Alex MacNicoll) discover a group of Mexican immigrants trying to cross into the United States in the middle of the night. Their leader is Gustavo (Jorge A. Jimenez), who functions not as a mercenary coyote but as a kindhearted shepherd trying to help his fellow churchgoers. Tensions flare in the darkness and Jackson accidentally shoots and kills Gustavo’s teenage son, Fernando (Alessio Valentini). While his dad tries to take the blame and the local Texas Ranger (Lopez) grows suspicious, Jackson hops on his horse and rides across the river in a panic.

And so we have a reverse immigration story, which simultaneously feels novel and like the stuff of classic Westerns—tales of desperate men in danger seeking sanctuary south of the border. That’s an intriguing story to tell at this specific point in our nation’s history, when there’s so much bigotry and cruelty inflicted upon families trying to make their way here in search of a better life. But for someone who’s grown up in this region, Jackson is surprisingly ignorant of Mexican culture. Like Liam Neeson’s character in last week’s “The Marksman,” who has a ranch on the Arizona-Mexico border, Jackson somehow has managed to avoid learning any Spanish, which is just bizarre.

Once he makes his way deeper into Mexico, Jackson enjoys the quiet beauty of some striking desert vistas (the work of cinematographer Juan Pablo Ramirez). But he also takes his time going from place to place in search of peace and forgiveness, which saps the movie of the suspense it sorely needs. And with the exception of one coyote character who’s cartoonish in his villainy, every single person he meets is saintly in their kindness and generosity—which is an oversimplification in the opposite direction from the stereotypical way Mexican characters too often are portrayed in films and television. As he ventures toward Fernando’s hometown of Guanajuato, deep in central Mexico, he encounters a poor, elderly couple who share their meal with him and a single mom and her young son on a bus, to whom he reads The Adventures of Huckleberry Finn in the movie’s most awkward and contrived connection. But a brief stop at a fancy horse ranch is compelling, as it allows Jackson to show off his natural ability as a trainer. This stretch gives Allyn a chance to reveal an actual personality to his character, and it finds an engaging rhythm that’s elusive elsewhere, suggests the better movie that might have been.

Instead, “No Man’s Land” wraps up in a jarring burst of violence that comes out of nowhere during a sensitive moment of healing (Jimenez is quite good as the slain boy’s father). And we’re forced to hear Jackson literally say: “Mexico’s not like I thought it was … I was wrong. I was wrong about a lot.” (Allyn co-wrote the script with David Barraza). It’s a lovely sentiment, but more mature filmmakers would have found a more nuanced way to convey it. 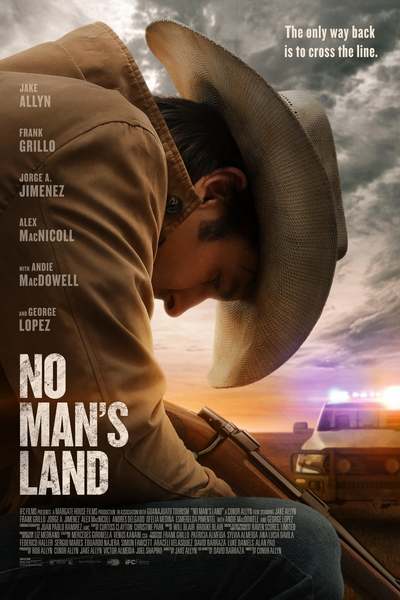 Rated PG-13 for some strong violence and language.

Jorge A. Jimenez as Gustavo