It’s interesting that “No Exit,” premiering today on Hulu, was once scheduled for a theatrical release by Fox because it feels like the kind of thing that doesn’t play in multiplexes anymore. It’s got a low budget and only a couple familiar faces. The market has pushed this kind of thriller out, moving them to streamers like Amazon, Netflix, and Hulu. So Fox changing their mind after the Disney merger and pushing this to their streaming service makes sense. Gone are the days when one could stumble into something like “No Exit” on a rainy day without really knowing what it’s about, startled by its twists and turns. It reminded me a great deal of 2003’s “Identity,” another single-setting thriller with a modest budget that made $90 million in a very different era, or the films that typically starred Angelina Jolie or Ashley Judd based on books that everyone read on a beach a few years earlier. "No Exit" is imperfect and struggles to get going, but it's a grisly piece of work that earns your suspension of disbelief. If you’re a fan of those ‘00s standalone thrillers, check out "No Exit" before it gets crushed in the next wave of streaming content.

Damien Power directs this adaptation of a thriller novel of the same name by Taylor Adams. It has the kind of beautifully simple set-up that this fan of Hitchcock and Christie loves. A woman named Darby Thorne (Havana Rose Liu) gets a call that her mother is in the hospital. She flees the rehab facility she’s in—a detail that adds to her vulnerability and sense of overall panic—to try and drive to get to her mother, despite the protestations of her sister. As he’s traveling through the treacherous Utah mountains, she hits a blizzard, forcing her off the road and into a rest stop to wait it out. There, she meets four other stranded travelers—Ash (Danny Ramirez), Lars (David Rysdahl), Ed (Dennis Haysbert), and Sandi (Dale Dickey). It seems mundane until Darby goes outside to get a signal and finds a kidnapped girl (Mila Harris) in a van. Whose van? One of the four people in the rest stop is a monster. Darby has to figure out who’s dangerous enough to kidnap a child and how she can save the girl in the middle of a snowstorm.

“No Exit” kind of blows up its premise early, revealing the kidnapper before the end of the first act, but don’t panic. This is the kind of script one would know is based on a novel without seeing the credits because it has about a half-dozen chapter-ending twists. Let’s just say there are a lot of secrets in that rest stop, and while some may be put off by the coincidences and contrivances, “No Exit” works better as it piles up the insanity. It’s one of those films that deftly teeters on the edge of utter nonsense, and the balancing act becomes part of the escapist fun. It helps that Power admirably holds it together in terms of craft, getting brutal enough to remind people that he made “Killing Ground” while also having a stronger eye than a lot of streaming original directors, especially in the chaotic final act.

He’s also strong with his ensemble, never allowing Liu to devolve into histrionics but keeping her grounded in a believable performance. Haysbert and Dickey are both incredibly welcome character actors who add significant weight as a couple who may not know everything about one another. Ramirez and Rysdahl have very different energies, but Power and writers Andrew Barrer & Gabriel Ferrari lean into that and challenge preconceptions.

It’s tempting to say that “No Exit” works best if you turn off your brain, and I feel like there’s a stronger version with sharper dialogue and a more pronounced sense of claustrophobic tension in terms of space. However, this is the kind of thing that’s harder to pull off than it looks. Trust me. I’ve seen so many forgettable thrillers on streaming services. And I have a feeling that’s where I’ll be watching a lot more. 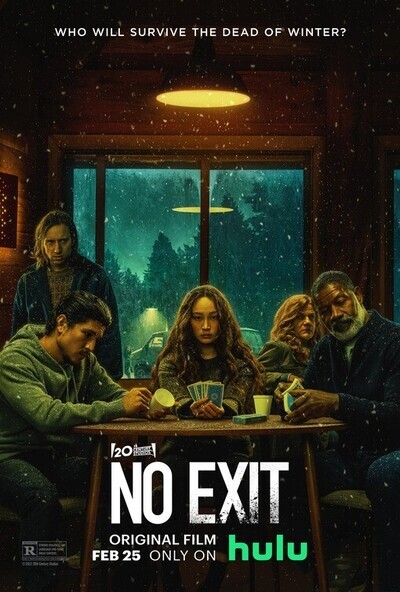 Rated R for strong violence, language and some drug content.