Pitch-black Australian horror film "Killing Ground" goes where so many other chillers from the land down under have already gone by pitting two redneck hunters against a pair of doe-eyed lovers. The main distinguishing feature of this film is its almost-novel nesting-doll plot structure, and passing thematic interest in its narrative's formulaic nature. Writer/director Damien Power asks viewers to follow three groups as they converge at an out-of-the-way camping site: newly-engaged couple Ian (Ian Meadows) and Sam (Harriet Dyer); poor white trash duo German (Aaron Pedersen) and Chook (Aaron Glenane); and happy parents Margaret (Maya Strange) and Rob (Julian Garner) and their two children, teenager Em (Tiarnie Coupland) and infant Ollie (Liam Parkes). But the only trick this film has up its sleeve is something that viewers will figure out pretty quickly: all three subplots are not presented in chronological order. Unfortunately, this structural hook isn't strong enough to hang any worthwhile ideas on it.

More importantly, once the novelty of the film's non-linear plot wears off, "Killing Ground" is mercilessly rote. We watch as puzzle pieces fall into place, stuff that even the most inexperienced horror buffs should know is just preparation for the inevitable upcoming massacre. German and Chook talk about German's stint in prison, ogle women, and allude to mysterious recent events. Sam proposes to Ian, and he giddily accepts shortly before she notices that the nearby tent has never been visibly occupied. And Margaret and Rob puzzle over what they should do to cure Em of her recurring nightmares. Margaret floats the idea of new therapy wherein dreamers rewrite their dream' endings to get a more favorable result.

And as the pieces of this fragmented story fall into place, one can't help but feel oppressed by its basic familiarity. Once you catch up with what's going on, and realize that events are presented out-of-sequence, you start to realize how you're being manipulated into disliking Chook and German. Their crimes are, as presented, a matter of history. They've already happened, at some point, and cannot be changed. They lust after women, scowl a bunch, and prey on the unsuspecting. Trouble is that viewers of "Killing Ground" must eventually see what's coming. This film teases viewers by obstructing our view of the plot's road ahead, then only reveals what's coming once we realize we're stuck on a one-lane road with no place to turn off. Power traps us, and then expects us to be relieved when he doesn't go exactly where he's led us to think he would.

The most interesting thing about "Killing Ground" is the seeming hint of self-awareness that Em's dream therapy angle introduces. Think of it: we're watching this movie decades after the release of such seminal proto-slashers as "The Texas Chain Saw Massacre" and "The Last House on the Left." So maybe it's not just your imagination: maybe Chook and German are supposed to be psychologically basic. Maybe the big idea here is that nothing has changed in Australia in all the time since Power saw whatever horror film give him a yen to make this movie. Maybe the familiarity is the joke, and the idea is that we, as viewers, get to witness Power break the cycle by eventually rescuing us from yet another backwoods nightmare.

But in order for this defense to work, you'd have to engage me immediately by doing something different. Power has an adequate eye for detail, but his camera never settles on, or moves in a compelling way. The violence in the picture is nasty, full of images of young women being brutalized, stalked, and harassed by leering, impotent cavemen. But there's nothing so horrible here that you won't be able to sleep it off. And, apart from Meadows and Dyer's apparent chemistry, the film's characters are, as written and performed, rather dull. There's nothing to "Killing Ground," so what's the point in praising its creator for having a modicum of intelligence?

In case you can't tell, thinking about Power's film is much more fun than watching it. I mean, yes, it's interesting to consider a movie whose creators promise an end to a seemingly endless cycle of violence ... a cycle that they are actively contributing to. But all the pseudo-intellectual rationalizing in the world can't change the fact that "Killing Ground" is, as you watch it, an emotional dud. Imagine being harassed by a very sleepy carnival barker. Now imagine spending your money on something else. 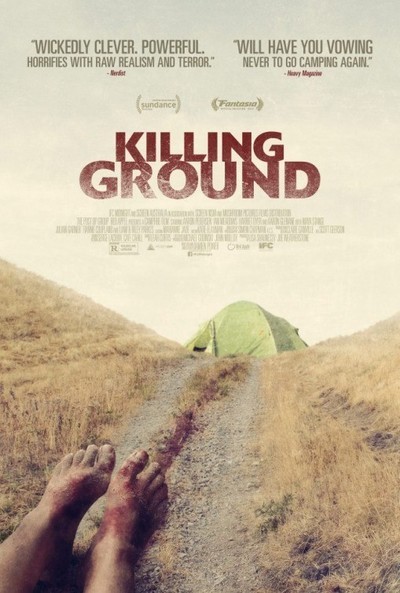