The sad Canadian sci-fi thriller “Night Raiders” barely stands apart from other punishing dystopian fantasies thanks to Cree-Métis writer/director/producer Danis Goulet’s focus on Indigenous protagonists. The year is 2043 and the place is a (nominally) unified North America. Warmongering “Jingos” propagate a dreary military-based culture and disenfranchised Indigenous residents are policed by huge, low-flying drones. Nobody talks about the mysterious Meekaw Virus or the equally vague war, both of which have only further entrenched racial tension and class-based inequality. Assimilation is an impossible dream, as you might imagine when you hear the pledge of allegiance at the Academy, a military school for an unfortunately homogeneous nation: “One country, one language, one flag.”

That all-purpose authoritarian slogan ironically stands out in "Night Raiders" given how much time Goulet and her collaborators spend insinuating rather than developing their nightmarish scenario. Bland dialogue and drab visuals make it consistently easy to know who we’re supposed to root for and against. The tidy, inert, and unoriginal nature of the movie’s style is also rather unfortunate given the movie's defining counter-cultural thrust: should Niska (Elle-Máijá Tailfeathers), a resourceful single mom, let her impressionable teenage daughter Waseese (Brooklyn Letexier-Hart) be raised by the Academy?

Niska's internal conflict is suggested when, after she surrenders Waseese to the Jingos, she tries to accept the Academy narrative by reconnecting with estranged family friend Roberta (Amanda Plummer) and her son Pierre (Eric Osborne), the latter of whom now serves as a Jingo spokesman. But there's not much of a dramatic conflict for viewers when our choices are to either root for Niska and her fellow Indigenous underdogs, or hiss at the obviously evil Academy, defined as they are by generic violence and pseudo-universal propaganda. “Night Raiders” may fitfully reflect America’s prevailing dark mood, but it’s generally not convincing as either a feel-good entertainment or a grim prophecy.

“Night Raiders” also isn’t firmly grounded in its characters’ anxieties, so it’s often hard to tell what motherhood and citizenship means to Niska, other than core values that are meant to be instinctively protected and worried about. Even Indigenous community members are defined by a superficial sort of camaraderie. An informal, but respectful Cree bonfire meeting serves to contrast our heroes with the Academy, defined as it is by military drills (how fast can you assemble a rifle?) and condescending officials who insist that the Cree “can’t take care of their own families.” Niska and Waseese’s relationship ostensibly proves that statement false.

Viewers know that Niska is a good mother because she spends most of the movie trying to reunite with her daughter, whose mysterious Academy patrons are always presented (or gossiped about) as brainwashing villains, so their motives are always transparently evil and self-serving. We know exactly how we’re supposed to feel about the Academy based on an establishing scene where an anti-Academy swastika graffiti is neatly tagged: “Peacekeepers or occupiers?” We can also hear Goulet’s unqualified contempt for these straw men fascists in murky dialogue like “As long as we have one piece of land, they will always come for us.”

It’s only a matter of time before Victoria (Birva Pandya), a fellow Academy recruit, shows Waseese why you can’t even trust bad guys who sort of look like you. That’s a loaded and frankly patronizing concept given how little we know about Victoria beyond her identity as a person-of-color. But a scapegoat is inevitably needed to advance the movie’s tissue-thin plot, so a few supporting characters rise to the occasion. You probably already know who they are and that’s most of the problem.

So much of “Night Raiders” depends on at-a-glance assumptions that it’s often easy to nod along with its pat implications without ever really engaging with its loaded symbolism. We lurch from one toothless conflict to the next through a series of dreary chases and set pieces, most of which look and sound like they were assembled by the movie’s weary on-camera subjects. And while this sort of wan rebellion yarn seems to have been designed with a general audience in mind, there’s nothing here that’s so culturally specific or emotionally focused as to earn our emotional investment.

Niska and Waseese’s search for acceptance is especially frustrating given how generally sympathetic they often seem. It’s hard to imagine anybody—even misguided viewers who identify with the Jingos—feeling completely comfortable in a world where everybody looks, talks, and behaves the same way. But that’s exactly the sort of bleak cookie-cutter future that “Night Raiders” forecasts: heroes are good because they attack the right bad guys (mostly drones), and villains are bad because they are either too weak or too insensitive to fight the real enemy. I wanted to root for and care about the world of “Night Raiders,” but I never felt like Niska and her daughter said more about themselves than their predictable behavior advertised. 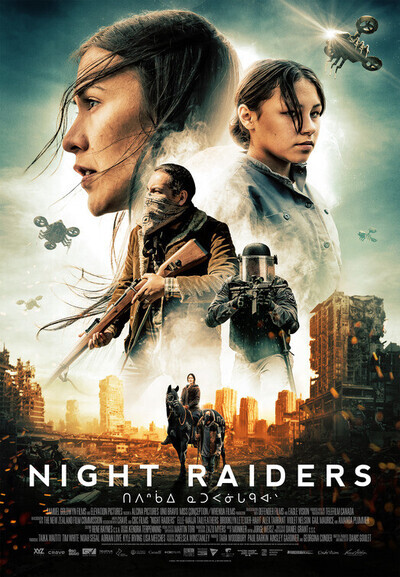