For decades, human rights activist and attorney Nasrin Sotoudeh has worked to change the status quo in Iran. After the Iranian Revolution, the country greatly changed with regards to women’s rights. Women were purged from government positions, forced to observe Islamic dress code, and lost the right to divorce or to have child custody. To combat these societal oppressions, Sotoudeh fought to free death row inmates and children accused of major crimes, and for a woman’s choice not to wear her hijab.

Jeff Kaufman’s brisk and empowering documentary, simply titled “Nasrin,” chronicles the great lengths her and others have traversed for human rights in the Middle East country.

Filmed from late 2017 thru mid-2018, the doc opens by explaining Nasrin’s special bond with her husband Reza Khandan. The couples share a companionate marriage, whereby Reza totally supports his wife’s work and loves her independent streak. At most junctions, “Nasrin” certainly concerns social justice. But on another spectrum it’s the partnership of these two nurturing individuals that propels Nasrin’s story. You get the sense that Nasrin and Reza, if they wanted to, could easily discover individual success. Yet they only find true happiness and fortitude with the other. Their relationship provides a wonderfully intimate portrait of the life behind an activist.

Outside of her home life, Nasrin’s career is racked with peril. The Iranian government perpetually singles her out for her activism and law-practicing work. This invasion of privacy certainly isn’t new for the attorney. For much of extremist Iranian President Mahmoud Ahmadinejad’s time in office, dissent and protests were curbed or punished. While helping the Defenders of Human Rights Center, run by Nobel Peace Prize Laureate Shirin Ebadi (she appears in this documentary too), Nasrin watched as the vice president of the organization, Narges Mohammadi, was arrested in 2015 and sentenced to 16 years in prison. Mohammadi was only just released in October 2020.

I’m particularly drawn to how Kaufman isn’t solely confined to Nasrin’s story. While the majority of the film focuses on her efforts, it aims to tell the country-wide effort to enact change, from the aforementioned Mohammadi to Ebadi, to the Iranian film director Jafar Panahi and the young reformer Narges Hosseini. Arrested for her public protest of removing her hijab in public and waving it in the air, Hosseini is threatened with major prison time. Nasrin comes to her defense, and during that time other women begin participating in what became known as the "Girls of Enghelab Street.” Hosseini’s story exemplifies the innumerable heroes in the fight for social justice. Likewise, her ordeal explains the injustice of the Iranian justice system in Tehran. Nasrin, for instance, needs three bail visits to negotiate Hosseini’s release because a dodgy presiding judge refuses to meet with her.

Kaufman pitches the case as the impetus for Nasrin’s eventual arrest. To demonstrate the strain and despair that Nasrin doesn’t outwardly show, Kaufman employs actress Olivia Colman to provide a voiceover for the attorney’s letters to her family. She also reads the many world news stories written about the activist. When you can get Colman, you don’t hesitate. Yet I found the tonal vocal shift from those onscreen to the actress’ very Anglophile voice an odd distraction that separated us from the texture of the region and the subject. That’s probably because Colman isn’t playing her outwardly bubbly self. Rather she takes on an austere tone, which greatly diverges from Nasrin’s seemingly buoyant personality. The choice robs the attorney’s quite personal and open letter from their intended introspective purpose.

The documentary stays within the attorney’s voice enough, however, that such choices aren’t wholly detrimental. Nasrin's calls from Evin Prison—a notorious jail for political dissenters—fully paint her struggle, as she’s subjected to solitary confinement and no visits from family or friends. In between Nasrin’s wrongful imprisonment, Kaufman elucidates the many corruptions in Iran. But he does not show the country as an inherently evil place, as it often is represented as in Western media.

There are moments when the artistic tapestry of the country pops through: Nasrin visits plays and art galleries, and there’s real love and community shown among the everyday sights and sounds. And considering the visual quality from embedded filmmakers who are capturing these scenes under the lowest of keys, our view into the mundane happenings of Tehran is immersive. In depicting one woman’s fight for justice, Kaufman’s indelible documentary becomes an empowering three-dimensional story of resistance and courage. 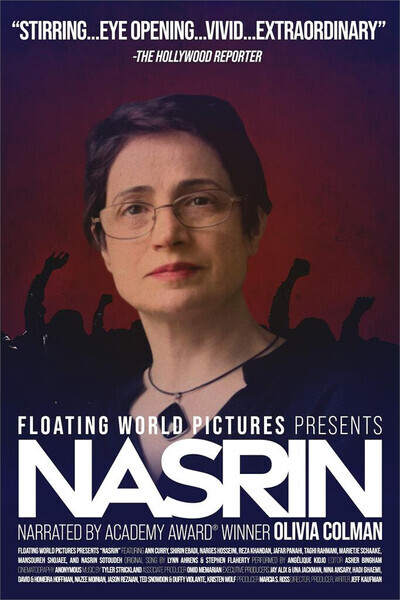 Jafar Panahi as Self

Ann Curry as Self

Shirin Ebadi as Self

Nasrin Sotoudeh as Self