Robert Altman's "Nashville," which was the best American movie since "Bonnie and Clyde," creates in the relationships of nearly two dozen characters a microcosm of who we were and what we were up to in the 1970s. It's a film about the losers and the winners, the drifters and the stars in Nashville, and the most complete expression yet of not only the genius but also the humanity of Altman, who sees people with his camera in such a way as to enlarge our own experience. Sure, it's only a movie. But after I saw it I felt more alive, I felt I understood more about people, I felt somehow wiser. It's that good a movie.

The movie doesn't have a star. It does not, indeed, even have a lead role. Instead, Altman creates a world, a community in which some people know each other and others don't, in which people are likely to meet before they understand the ways in which their lives are related. And he does it all so easily, or seems to, that watching "Nashville" is as easy as breathing and as hard to stop. Altman is the best natural filmmaker since Fellini.

One of the funny things about "Nashville" is that most of the characters never have entrances. They're just sort of there. At times, we're watching an important character and don't even know, yet, why he's important, but Altman's storytelling is so clear in his own mind, his mastery of this complex wealth of material is so complete, that we're never for a moment confused or even curious. We feel secure in his hands, and apart from anything else, "Nashville" is a virtuoso display of narrative mastery.

It concerns several days and nights in the lives of a very mixed bag of Nashville locals and visitors, all of whom, like the city itself, are obsessed with country music. Tennessee is in the midst of a presidential primary, and all over Nashville, there are the posters and sound trucks of a quasi-populist candidate, Hal Philip Walker, who seems like a cross between George Wallace and George McGovern. We never meet Walker, but we meet both his local organizer and a John Lindsay-type PR man. They're trying to round up country-western talent for a big benefit, and their efforts provide a thread around which some of the story is loosely wound.

But there are many stories here, and in the way he sees their connections, Altman makes a subtle but shrewd comment about the ways in which we are all stuck in this thing together. There are the veteran country stars like Haven Hamilton (Henry Gibson), who wears gaudy white costumes, is self-conscious about his short stature, is painfully earnest about recording a painfully banal Bicentennial song, and who, down deep, is basically just a good old boy. There is the reigning queen of country music, Barbara Jean (Ronee Blakley), who returns in triumph to Nashville after treatment at a burn center in Atlanta for unspecified injuries incurred from a fire baton (she's met at the airport by a phalanx of girls from TIT -- the Tennessee Institute of Twirling -- only to collapse again). There is the corrupted, decadent rock star, played by Keith Carradine, who is so ruthless in his sexual aggression, so evil in his need to hurt women, that he telephones one woman while another is still just leaving his bed, in order to wound both of them.

But these characters are just examples of the people we meet in "Nashville," not the leads. Everyone is more or less equal in this film, because Altman sees them all with a judicious and ultimately sympathetic eye. The film is filled with perfectly observed little moments: The star-struck young soldier keeping a silent vigil by the bedside of Barbara Jean; the campaign manager doing a double take when he discovers he's just shaken the hand of Elliott Gould ("a fairly well-known actor," Haven Hamilton explains, "and he used to be married to Barbra Streisand"); the awestruck BBC reporter describing America in breathless, hilarious hyperbole; the way a middle-aged mother of two deaf children (Lily Tomlin) shyly waits for an assignation with a rock singer; the birdbrained cheerfulness with which a young groupie (Shelley Duvall) comes to town to visit her dying aunt and never does see her, being distracted by every male over the age of sixteen that she meets.

The film circles around three motifs without, thankfully, ever feeling it has to make a definitive statement about any of them. Since they're all still very open subjects, that's just as well. What Altman does is suggest the ways in which we deal with them -- really, in unrehearsed everyday life, not thematically, as in the movies. The motifs are success, women, and politics.

Success: It can be studied most fruitfully in the carefully observed pecking order of the country-and-western performers. There are ones at the top, so successful they can afford to be generous, expansive, well-liked. There are the younger ones in the middle, jockeying for position. There are what can only be described as the professional musicians at the bottom, playing thanklessly but well in the bars and clubs where the stars come to unwind after the show. And at the very bottom, there are those who aspire to be musicians but have no talent at all, like a waitress (Gwen Welles) who comes to sing at a smoker, is forced to strip, and, in one of the film's moments of heartbreaking truthfulness, disdainfully flings at the roomful of men the sweat socks she had stuffed into her brassiere.

Women: God, but Altman cares for them while seeing their predicament so clearly. The women in "Nashville" inhabit a world largely unaffected by the feminist revolution, as most women do. They are prized for their talent, for their beauty, for their services in bed, but not once in this movie for themselves. And yet Altman suggests their complexities in ways that movies rarely have done before. The Lily Tomlin character, in particular, forces us to consider her real human needs and impulses as she goes to meet the worthless rock singer (and we remember a luminous scene during which she and her deaf son discussed his swimming class). Part of the movie's method is to establish characters in one context and then place them in another, so that we can see how personality -- indeed, basic identity itself -- is constant but must sometimes be concealed for the sake of survival or even simple happiness.

Politics: I won't be giving very much away by revealing that there is an attempted assassination in "Nashville." The assassin, a loner who takes a room in a boarding house, is clearly telegraphed by Altman. It's not Altman's style to surprise us with plot. He'd rather surprise us by revelations of character. At this late date after November 22, 1963, and all the other days of infamy, I wouldn't have thought it possible that a film could have anything new or very interesting to say on assassination, but "Nashville" does, and the film's closing minutes, with Barbara Harris finding herself, to her astonishment, onstage and singing, "It Don't Worry Me," are unforgettable and heartbreaking. "Nashville," which seems so unstructured as it begins, reveals itself in this final sequence to have had a deep and very profound structure -- but one of emotions, not ideas.

This is a film about America. It deals with our myths, our hungers, our ambitions, and our sense of self. It knows how we talk and how we behave, and it doesn't flatter us but it does love us. 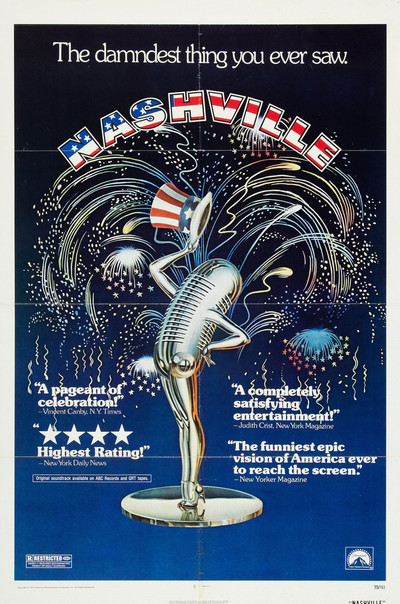 Julie Christie as Herself